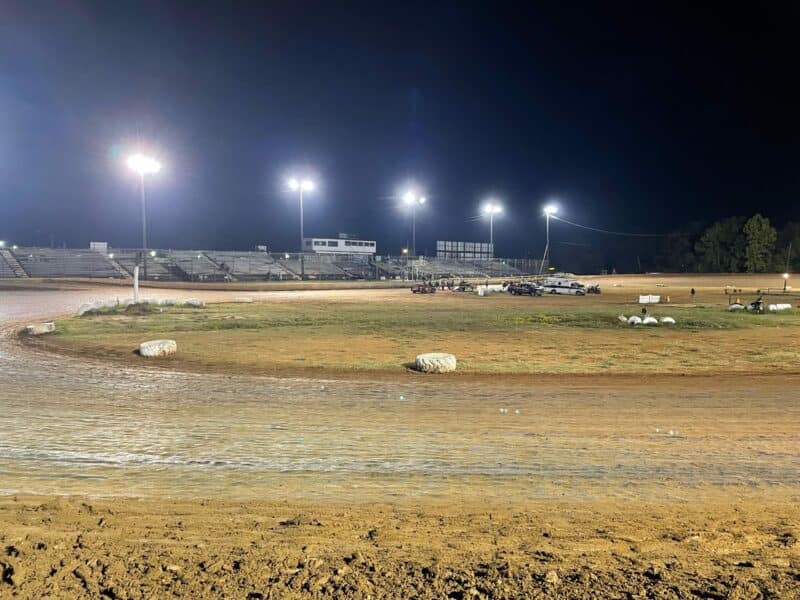 Sam Hafertepe Jr. used a controversial late-race block to preserve the 2022 Short Track Nationals win, taking the final checkered flag ever at the I-30 Speedway in Arkansas.

Friday night ended up being an apt preview of Saturday’s Short Track Nationals finale (Oct. 1) at I-30 Speedway, with the main event a duel between Aaron Reutzel and Sam Hafertepe Jr., the two winners of Friday’s prelim features. And the finish was close.

Reutzel, who led the opening 17 laps of Saturday’s 41-lap feature, got into trouble when he hooked the cushion in turn 4 on lap 18, opening the door for Hafertepe to blow past for the race lead. From there, Reutzel got two shots at Hafertepe that he couldn’t make work. Lap 32 saw Reutzel get alongside Hafertepe for the race lead, throwing a slide job through turn 2 that he couldn’t finish.

Then the race was decided on lap 35. Reutzel got a monster run on turn 4 exit, leaving Hafertepe with no choice but to throw a late block on Reutzel at the start/finish line that saw Hafertepe’s car kiss the frontstretch wall and Reutzel’s front wing dislodged.

🏁 @samhafertepejr etches his name in sprint car history by winning the final race ever at I-30 Speedway!

That aero disadvantage left Reutzel unable to challenge for the race win, and gave Hafertepe his second Short Track Nationals title in the last three seasons.

Race winner Hafertepe had some very harsh words for Reutzel in victory lane, calling out the Texan for dirty driving while asserting he knew he’d win the race because Reutzel would inevitably screw up.

Saturday’s finale feature race was mercifully slowed by only two caution flags after preliminary action both nights of the Short Track Nationals were marred by more than a half-dozen red flags.

This weekend marked the end of 50 years of racing at I-30 Speedway, which has been sold and is slated for demolition.

Reutzel came up one spot short of the Short Track Nationals finale win, but he won pretty much everything else over the course of I-30’s final weekend, winning Thursday night’s sprint car feature, a preliminary feature Friday night, the dash race Saturday and breaking the track record in qualifying Friday night.

🏁 Aaron Reutzel guarantees himself a start in the final race at @I30_Speedway with this three-wide move to win @LucasOilASCS Feature #1!

Matt Covington won hard charger honors in I-30 Speedway’s final race, going from 20th to 12th in the A-main.

Blake Hahn didn’t get as close to the front as he hoped Friday night, but using the high side of the racetrack he climbed from 10th to fifth by race end, two spots better than former World of Outlaws regular Wayne Johnson, whom Hahn currently leads in ASCS points.

Ryan Timms had arguably the best save on both nights of the Short Track Nationals, pulling a 360 spin without incident during his prelim feature Friday and then saving a wheel stand off turn 4 during Saturday’s feature race…

Unfortunately, one lap after saving said wheel stand, Timms ended up putting his car into the fence in turn 4 on lap 8 of the feature event.

There was no shortage of flipping over the course of the final Short Track Nationals at I-30 Speedway, but the biggest air of the weekend came Thursday night before the Nationals officially kicked off courtesy of Benton, Ark.’s Cody Gardner.

Big air for the G6 pic.twitter.com/KSaclfQlJi

And while on the topic of notable flips, Joey Schmidt went down in the record books as incurring the last officially recorded flip at I-30 Speedway Saturday.

Justin Sanders ended up finishing on the podium in Saturday’s finale, but he lost the Dash coming to the white flag courtesy of a flat right-front tire. He’s in the Vexed section because given just how hard it was to pass up front Saturday (none of the top-five starters advanced more than two positions over the course of the feature), had he won the dash Sanders may well have won the Short Track Nationals.

Benton, Ark.’s Zach Pringle seemed to be magnetically attracted to the frontstretch wall at I-30 on Saturday, clipping it entering turn 1 on the first lap of the second D-main, then flipping himself on the second lap after coming across the race leader’s nose and putting himself into the fence.

Quinter, Kan.’s Kyler Johnson spun himself out of the race lead during the first B-main on Saturday, only to get bailed out by another incident on the same lap triggering the yellow flag. He wasted that bailout though, flipping on the ensuing restart and failing to transfer to the A-main.

Thoughts and prayers go out to the family and colleagues of Rick Eshelman, the voice of the World of Outlaws late model series. Eshelman disappeared en route to the DIRTcar Fall Nationals over the weekend, with his son posting on Facebook Saturday that Eshelman had taken his own life. His death is a major loss for all of dirt racing and shocking given his demeanor in the booth for so many years. Rest in peace Mr. Eshelman, DirtVision will never be the same with you.

Suicide is sadly an issue I’ve had experience with in my lifetime, and all I’ll say to my readers and race fans in general is please, talk to someone if you’re battling demons, be it family, friends, co-workers or the National Suicide Prevention Lifeline. Asking for help is never an unfair burden.

It was cringeworthy to hear Hafertepe give the final victory lane interview in the history of I-30 Speedway talking smack about a driver he bested as opposed to relishing how significant a win he scored. Reutzel has undoubtedly earned a lot of the vitriol he’s incurred in sprint car racing, but the blocking incident that decided Saturday’s race sure looked like a racing deal from my seat.

Yeah I’m the first to not like Aaron but I have no idea what he did wrong there either. Got a run on the high side and they came together fighting for the same spot on the track. Completely a racing deal. Aaron was gonna beat him still if the nose wing didn’t collapse.

Watching all the wrecks in Friday’s heat races, hell all weekend long, made me wonder if the drivers were subconsciously trying to make the last race weekend at I-30 last longer. Painfully long program. I’d be lying if I said I didn’t doze off during the B-mains Friday night.

I was at I-30 Speedway last weekend for the final regular IMCA program, a race program that featured no class of racecar that required a push start. Comparing how efficiently that program ran with how agonizingly long both nights of racing this weekend felt, I absolutely will die on the hill that sprint cars need to be equipped with starters.

The final race night at I-30 Speedway lasted more than six hours and a TON of that time had to do with the minutes it took to point and push start each field of sprint cars for each heat and after each incident (and incidents were epidemic during this Short Track Nationals). Had this not been a farewell night with grandstands full of lifetime fans, I’d wager there’d be plenty of attendees not rushing to come back for another marathon.

Friday night’s racing saw no passing points in an invert format. The race fan in me applauds this. The competitor in me hates it. The Short Track Nationals definitely qualify as a major event. Racetracks that host major events that draw big guns into their race fields sometimes need to put chaos on the back burner and let competition play itself out, even if that front loads the field. Sadly, both the competitor and race fan sides of me were irritated Saturday when passing points returned to the fold. Nothing like Saturday night math classes.

Since I was unable to be in Little Rock this weekend, I was thrilled to have video replays during the Short Track Nationals broadcast. But my God was it distracting to have audio of the replay playing over the actual audio stream. Of course, that double audio was better than watching the D-main with no audio whatsoever, which is what happened during the opening laps Saturday night.

It was a welcome relief to hear Scotty Cook ask actual interview questions and keep them concise. I would love to have that Scotty Cook show up to cover the Chili Bowl Nationals in January.

I-30 Speedway, much like Oglethorpe Speedway Park did for their final race a year ago, allowed race fans to walk a “final lap” following the conclusion of the Short Track Nationals.

I’d honestly suggest that tracks need to make this a weekly occurrence. It’s a great way to bond fans to a location, and as my fellow Frontstretch colleague Jared Haas learned last week when we took in the action at I-30, you learn a lot getting up close and personal with a dirt racing surface.

Pay to start the Saturday finale of the Short Track Nationals.

Where it Rated (on a scale of one to six cans with one a stinker and a six-pack an instant classic): The final Short Track Nationals at I-30 gets three Two Term Double IPAs from Diamond Bear Brewing company (yes, Little Rock is still very much Clinton country).

I-30 Speedway is a gem that I’ll shed a tear seeing demolished, but this is a race review, and this weekend’s racing program felt like a chore by Sunday morning. I lost count of how many red flags had to fly over the course of two nights. And it’s a shame the Reutzel/Hafertepe duel that decided the race ended with trash talk.

Up Next: Thinkin’ Dirty heads north to the Oswego Speedway for the 200-lap conclusion of Super DIRT Week Sunday in New York. Coverage of the $50,000-to-win modified feature can be found Sunday on DirtVision.

I don’t understand Hafertepe comment about Reutzel. What was so dirty? Hafertepe is the one throwing a major block. To me, it was all good hard racing for a big big win. Pretty classless move.

I watched at home Fri & Sat. Fell asleep Fri before it was all over with. Sat I managed to stay up. SO MANY FLIPS. Goodness. Ive never seen so many. This no doubt was the biggest delay.

Also it was VERY annoying for Flo to run a replay with the announcers tracks ON TOP of the guy in the pits trying to do an interview. By the end I noticed they seemed to of fixed it, but Ben Shelton never seemed to know they were doing that. The interviews down in the pits was a welcome addition, with actual questions and info gathering.

Hate to see Copart take yet ANOTHER track away from us.