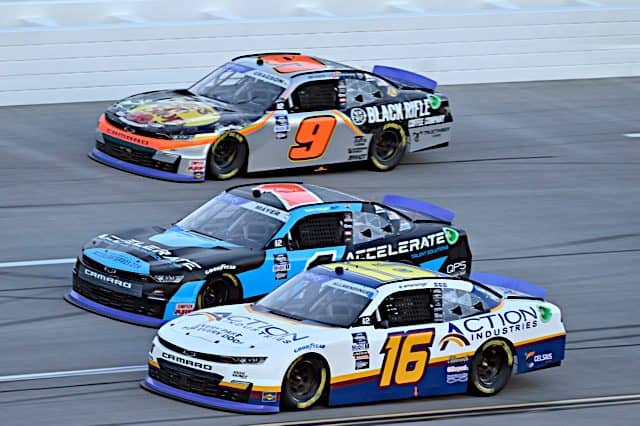 AJ Allmendinger locked himself into the Round of Eight this past Saturday with a razor-thin win over Sam Mayer at Talladega Superspeedway in Saturday’s (Oct. 1) Sparks 300.

Landon Cassill, Ryan Sieg and Josh Berry filed in behind the pair of Chevys, but it was undoubtedly Allmendinger and Mayer that stole the show. Allmendinger made a last-second move to the middle lane to take Mayer on the outside and cross the line only inches ahead of the budding JRM protege.

Allmendinger had led four times coming to the white flag in superspeedway races up until Saturday, but had never managed a single win. He put that drought to bed on Saturday, and he knew it. How can I tell that he did? His post-race radio.

Obviously, Allmendinger’s win locks him into the next round of the NASCAR Xfnity Series Playoffs with Noah Gragson, but those two aren’t the only ones that raced well.

Austin Hill led a whopping 60 of 113 laps, but ultimately fell short due to some late-race difficulties with navigating lapped traffic. Although the 14th-place finish isn’t what Hill and the Richard Childress Racing crew wanted after having two cars start on the front row, it wasn’t a terrible day at the office.

Hill won both of the first stages with Sheldon Creed directly in tow in stage one. Couple that with Hill’s earlier superspeedway wins earlier this season and he’s carving out quite a nice role for himself as a potential superstar at those tracks.

Mayer will get it, and Saturday proved that. JRM’s young gun has had himself quite the rookie year, and some people blame it on his equipment. I have news for those people – you have to be able to drive it, and he can.

It’s not often we see a rookie racer go toe-to-toe with one of the series’ all time best, but that’s exactly what happened on Saturday. He showed patience and pace all day as he finished both the first stages inside the top 10 (P10 & P6, respectively). More importantly, though, when he was presented an opportunity for the win he took it without blinking.

Mark my words, Mayer will be a very, very good driver sooner rather than later, and anyone that thinks otherwise shouldn’t be your friend.

Still a lot to be proud of today. pic.twitter.com/o72GHPiYoQ

Myatt Snider‘s gas man had to walk a little farther than he had signed up for on Saturday, and while it wasn’t much further, it was about as sketchy of a position as he could have been in.

Snider came down pit road during the final stage for a gas-and-go stop when he turned in front of Blaine Perkins in the No. 02 Chevy. This resulted in Snider sliding into his pit stall facing the complete opposite direction, but safely within the boundaries of his pit box.

Well, turning the car around would take too long, so the team decided to play the best game of reverse psychology I’ve ever seen and just fill the car up from the other side. The Xfinity series truly is the gift that keeps on giving.

Myatt Snider spins on pit road, so what does the No. 31 crew do?

Ty Gibbs makes an appearance on the bottom of this week’s Losers list simply for starting off on the wrong foot. He wound up 11th, which in hindsight isn’t that bad. What is bad, though, is that Gibbs didn’t bother to screw himself out of a much-needed playoff win late in the race. He got it out of the way about as early as possible.

No, Gibbs got it out of the way on lap three when he spun in a single-car accident after he took a bad bump from the drafting Justin Allgaier. Gibbs is still one of the more favored drivers as far as the championship goes, but a higher finish on Saturday definitely wouldn’t have hurt.

We talked about Ryan Vargas and the Reddit Ride last week, and it was just as beautiful as I had imagined. However, it didn’t look as great as anyone hoped when it finished in 36th.

Hill, though, finished much higher than that in a slick ride of his own.

Hill’s typically blue-and-white scheme was replaced with pink accents this week to honor and raise awareness for Breast Cancer Awareness month. Hill’s ride always offers a classic palette of colors, but I like the subtle differences in this scheme that set it apart from the main livery.

It looks great, but more importantly it’s for a great cause, and that’s something I can get behind.

As we inch closer and closer to the round of eight, there’s only one more spot available for one lucky driver to lock themselves in instead of advancing on points. Currently, Gragson and Allmendinger are locked in, with Gibbs, Hill, Berry, Allgaier, Mayer, Sieg, Daniel Hemric, Riley Herbst, Brandon Jones and Jeremy Clements following in that order. A full points breakdown can be found here, on Jayski.com.

As a previous owner of a few fast Fords myself, it pains me to see the current landscape of the Xfinity series. On Saturday, there was only one Ford inside the top 10, thanks to a ninth-place finish by Sieg.

There was a time when Fords ran rampant in the Xfinity series, and even though those days are long gone, I still expect there to be more competition, at least at superspeedways. Too often, though, that’s not the case. It’s even worse as of late, too. There are only two Fords in the playoffs.

I don’t normally do this, but I want to pose an open question: will we ever see the return of the fast Xfinity Ford? And if so, how and when?

Next up on the Xfinity series schedule is the Charlotte Roval, a race Allmendinger has a really great chance to rack up two in a row at. That will be the final race before the playoff field gets cut down to eight, so expect sparks to fly.

The green flag drops at 3:00 p.m. ET and will be aired on NBC, the Performance Racing Network and Sirius XM NASCAR.

I love AJ, Indy cars, 24 hours of Daytona, Cup, Xfinity. He’s the renaissance man. I just hate it that he didn’t want to go full time Cup. But it was his choice, & I respect it.