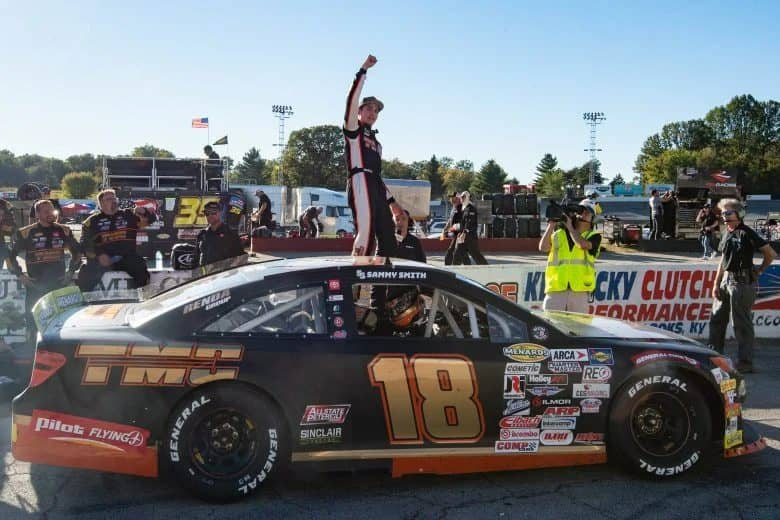 There was good on-track racing in the ARCA Menards Series race at Salem Speedway on Saturday (Oct. 1). It just was not for the lead. In his first trip to the 0.555-mile short track, Sammy Smith was perfect.

Smith posted the fastest time in the practice session, won the pole, then led all 200 laps en route to earning the win. Smith took his No. 18 Toyota out on a Sunday drive, cruising to his series-high fifth victory of the season.

The championship battle saw the top two tighten in points. Nick Sanchez now leads Daniel Dye by a precarious two points with only one race left in the season. Third-place Rajah Caruth saw his slim championship odds evaporate at Salem as mechanical woes ended his race with a 15th-place DNF.

200 laps are left in the 2022 ARCA season. With 95% of its events completed, how did the contenders fare at the high-banked Salem short track?

His Herr’s Snacks 200 victory adds to his resume, one which will surely grow as Smith progresses up the NASCAR ladder.

Winners at Salem! Thanks to the whole team and all my partners👊🏼🏆#11 pic.twitter.com/by3HwIYyXD

Sanchez wheeled his No. 2 Chevrolet to a sixth-place finish at Salem, one spot lower than his starting spot of fifth. As a result, he lost three points to Dye.

“It wasn’t our best race by any means,” Sanchez told Frontstretch. “Going into the weekend, we knew we were going to struggle a little bit. Honestly, the beginning parts of the race were better than expected, and I guess at the end, the handling just went away a little bit. Try to build off that for Toledo [Speedway].”

Sanchez is preparing for the season finale at Toledo as he does for every other ARCA event. Regardless of the championship outcome, Sanchez has grown as a racecar driver, earning career-highs in wins, top 10s and laps led.

“This year has by far been the biggest of my career, not just for the ARCA stuff but for the [NASCAR] Xfinity [Series] stuff,” he continued. “Making my first couple starts with BJ McLeod Motorsports and obviously the Big Machine Racing opportunity and to have opportunities to run up front like at Texas [Motor Speedway].

“At the end of the day, those are the opportunities where ARCA helps you get those opportunities, but those are what help put your name on the map and really boost your stock around the garage. Those are the races I look forward to improve and grow as a driver.”

Sanchez finished a career-best 11th in his most recent Xfinity start at Texas. If he wins the ARCA title at Toledo, he’ll permanently add that to his racing resume, an impressive accomplishment as he seeks to ascend the NASCAR ladder.

Dye quietly has driven an impressive ARCA season. He leads the series with 17 top 10s, currently on a 13-race top 10 streak. Moreover, Dye’s third-place finish at Salem was his fifth straight top five.

“We didn’t start off very good, but my GMS Racing team just fought hard all day and made good changes,” Dye said in a team release. “Super cool to put this Solar-Fit, Halifax Health, Race to Stop Suicide, GMS Chevrolet on the podium after being a lap down early, and gain three points in the championship fight. Going to Toledo will be pretty fun.”

A strong, hard-fought third-place finish today at Salem Speedway for DD in the Solar Fit, Halifax Health No. 43 Chevy!

Only 2-points separate Daniel from the @ARCA_Racing lead, as we head to Toledo Speedway for the season finale next Saturday. 👊 [PR] pic.twitter.com/SZ9hx1hQy9

Dye only has led laps in two ARCA events this season, at Phoenix Raceway and at Berlin Raceway. At Berlin, he led 192 laps before a mechanical failure derailed what would have been his second straight victory there. Dye finished seventh, one spot behind Sanchez. That costly DNF could be the ultimate difference for Dye in the 2022 ARCA championship standings.

Three-time ARCA winner Taylor Gray wheeled his No. 17 to a fifth-place finish at Salem. He drove it as high as second place, passing two competitors in a nifty move that earned him the Reese’s Sweet Move of the Race award.

That pass by @TaylorGray17_ was sweet like a @reeses! pic.twitter.com/YMW731QiMR

Gray’s end result was not indicative of his performance as the abrasive Salem track surface caused the right rear tire to disintegrate shortly before the checkered flag flew. Still, Gray earned his ninth top five and 11th top 10 in only 13 starts this main ARCA campaign.

After winning the 2021 Salem event, Love came up 2.726 seconds shy of repeating there.

P2 again in my @CrescentTools Camry. Thank you to our partners and @VenturiniMotor. Really close to getting another one again today. Shoutout to my guy @BillyVenturini for throwing the headset on for today 😂 pic.twitter.com/mW4YvAphdD

Only 17 years old, Love boasts an impressive resume throughout the three ARCA series. He has won two ARCA Menards Series West titles (2020 and 2021). He finished ninth in the 2022 East standings despite running a part-time effort.

In his main series competition, Love has scored two victories, 14 top fives and 23 top 10s. He only has three DNFs — two due to mechanical woes. In 2022, Love has seven straight top 10s with his victory at the Illinois State Fairgrounds and four top fives in those performances.

Love will close out the season at Toledo in the No. 20, which is in a fierce battle with Sammy Smith’s No. 18 for the owners’ points championship.

The Shore Lunch 200 at Toledo will wrap up the ARCA season on Saturday (Oct. 8) at 4 p.m. ET with TV coverage provided by MAVTV Motorsports Network and available on FloRacing.