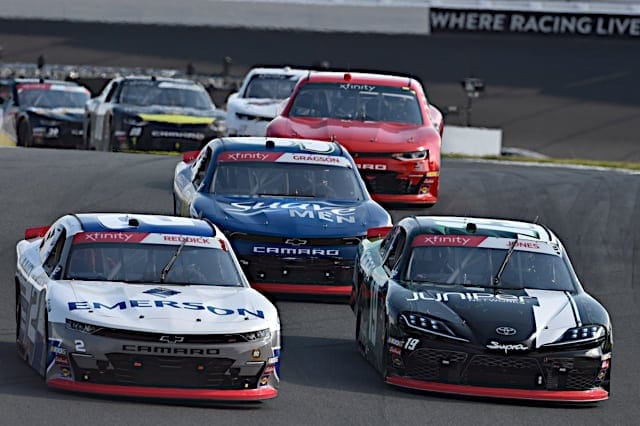 The Round of 12 in the NASCAR Xfinity Series playoffs concludes this weekend at the Charlotte ROVAL.

Three drivers will go home after qualifying, as 41 cars are entered for 38 spots.

Sage Karam will attempt his second start with Our Motorsports in the No. 02 Chevrolet, his ninth appearance this season.

Scott Heckert returns with BJ McLeod Motorsports for the fifth time this season in the No. 5 Ford.

SS Green Light Racing  puts road ringer Andy Lally back in its No. 08 Ford, his fifth appearance in 2022.

James Davison makes his first NASCAR start since the 2021 Talladega fall Cup race with Joe Gibbs Racing. The Australian will pilot the No. 18 Toyota.

Daniil Kvyat will attempt to pull double duty this weekend, trying for his Xfinity debut with Sam Hunt Racing in the No. 26 Toyota.

Austin Wayne Self will attempt to make his Xfinity debut in the No. 32 Chevrolet for Jordan Anderson Racing.  Self attempted his first start at Watkins Glen International but failed to qualify.

Jesse Iwuji Motorsports will have a new driver in its No. 34 Chevrolet, as Kaz Grala hops in to attempt his ninth Xfinity start of 2022.

Brad Perez returns with Emerling Gase Motorsports for his third appearance of the year.

RSS Racing brings Patrick Gallagher back in the No. 38 Ford in his first attempt since Watkins Glen.

Josh Bilicki will pilot Alpha Prime Racing’s No. 44 Chevrolet, while Stefan Parsons will be in the team’s No. 45 Chevrolet.

The No. 47 for Mike Harmon Racing is currently listed without a driver.

Brennan Poole will be in the No. 52 for Jimmy Means Racing after last competing for JD Motorsports at Texas Motor Speedway.

After making his last scheduled start in the No. 68 for Brandonbilt Motorsports, Brandon Brown will jump into the No. 78 Chevrolet for BJ McLeod Motorsports. Kris Wright returns to the seat of the No. 68 Chevrolet.