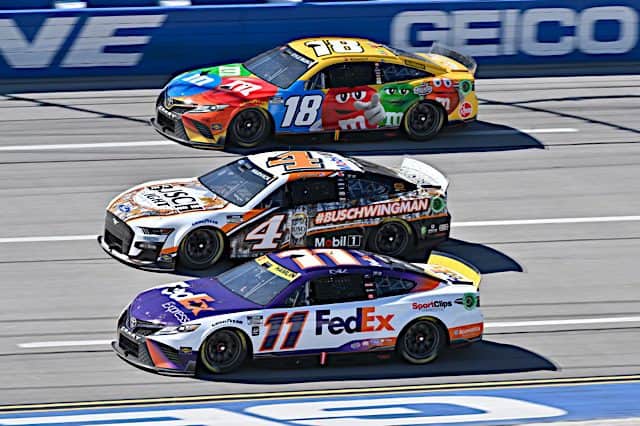 NASCAR’s Cup Series playoffs got off to a wild start in 2022. The first three races all ended with drivers outside the playoffs visiting victory lane. Round two’s opening race at Texas Motor Speedway saw Tyler Reddick, who was eliminated from the playoffs after a difficult first round, capture the checkered flag.

But at Talladega Superspeedway this past weekend, the one track where you can almost guarantee that chaos and unpredictability will reign supreme, the race was surprisingly orderly. There was only one multi-car crash early in the race. Most of the playoff drivers got through the afternoon unscathed, even those who were fighting for the win during the final green flag laps. It certainly was not a boring race; the competition was still as fierce as you would expect at Talladega. But rather than throwing caution to the wind, as so often happens at superspeedway races, the drivers of the Cup Series raced with strategic restraint.

Why such a change from the usual Talladega wreckfest? It all goes back to the past few weeks and the drivers’ increasing dissatisfaction with the Next Gen car. The races at Texas and Bristol Motor Speedway were marred by equipment failures. Tire blowouts were common in both races. The tire problems at Texas, in particular, were responsible for several hard crashes, often among drivers leading the race or competing for the win.

Of all the crashes at Texas, Alex Bowman’s incident did the most to put the Next Gen car under a microscope. Bowman’s car snapped around and backed into the turn 4 wall on lap 97, taking the No. 48 out of contention. Days later, Bowman began experiencing concussion-like symptoms and was not cleared to race at Talladega. Although Bowman’s crash did not look like an exceptionally hard hit, he reported that it felt like the hardest crash he had ever taken. Further, the wreck shared a similar look to Kurt Busch’s qualifying crash at Pocono Raceway from earlier this year, which has kept Busch sidelined ever since.

It’s one thing if a driver like Busch, who has raced in NASCAR for over 20 years, has a concussion. Any injury is bad enough, but Busch is 44 and probably experienced concussions earlier in his career. He may have even raced with one at a time when NASCAR was far less proactive about monitoring head injuries. But if Bowman, who is not yet 30 and has had a much shorter Cup Series career, suffered a concussion due to the rigid design of the Next Gen car, that should set off some alarm bells.

In the wake of Bowman’s injury, Denny Hamlin and Kevin Harvick have been particularly outspoken. Hamlin and Harvick have implied that NASCAR has known about problems with the Next Gen design for some time, but that the sanctioning body has been too slow to respond or not consulted with the drivers enough when seeking solutions. Additionally, there is an ongoing discussion between the competitors and Goodyear about who to blame for the tire failures. It simply felt like, for a lot of the past week, the frustrations of the drivers had reached a boiling point. Considering the tension in the garage, Talladega seemed destined to be either complete chaos or as dull as the autumn 2009 event. That was the race where drivers spent most of the afternoon running in a single file line in an apparent “protest” of NASCAR’s policing of bump drafting.

Fortunately for everyone involved, the past weekend’s race had a much better outcome. The Cup Series had a competitive and safe race, one that did not put the deficiencies of the Next Gen car back into the spotlight. The race was not decided by equipment failures, flat tires, a last lap melee, or even a yellow flag before the field got back to the finish line. Instead, Chase Elliott made the decisive move with a lap and a half to go, jumping out of line to pull even with leader Ryan Blaney. Elliott fell behind Blaney and Michael McDowell on the final lap until receiving a timely push from Erik Jones. Thanks to the help from Jones, Elliott was able to slip past Blaney and McDowell once more, holding the lead all the way to the checkered flag.

It took some aggression for Elliott to win the race, but it was the type of aggression that was strategically timed for the right moment. It was not a desperate attempt to take the lead at the last moment, regardless of what the consequences might be. Likewise, Blaney, Jones and Ross Chastain all did a superb job running at the front of the field after the final pit stops. Chastain has been a frequent target throughout the season for driving too aggressively, but he drove a clean, smart race on Sunday. He and Blaney may not have left Talladega victorious, but they are in great shape to advance to the third round of the playoffs and keep their championship hopes alive.

If anything, Sunday’s race felt reminiscent of Talladega’s 2001 spring race. That was the first restrictor plate race since the death of Dale Earnhardt, and it famously ran caution-free. Facing one of the darkest times in the history of the sport, the drivers of the Cup Series put on a spectacular race, displaying both high levels of competition and cooperation.

NASCAR needed a race like that on Sunday, and luckily it got one. The sanctioning body still has to address some major issues with the Next Gen car. But thanks to the strategic restraint shown by the drivers, the Cup Series got through the weekend at NASCAR’s most unpredictable track without crashes, equipment failures and injuries dominating the headlines. That is something for which everyone should be thankful.

Coincidental that Harvick received a pit road speeding violation? Should Hamlin be expecting one at an inopportune time that might significantly impact his Championship run? NASCAR doesn’t like to have their decisions criticized, especially by those who are “beneath” them.

“Should Hamlin be expecting one at an inopportune time that might significantly impact his Championship run?”

That would be swell.

I have seen the occasional Talladega race be tame before, and it usually happens after a series of pack races result in horrific multi-car wrecks. It doesn’t last. They’re racecar drivers and soon they will go all out again, and we’ll have more calamitous wrecks with drivers and possibly even fans being injured.

Lower the banking in these places and lose the pack racing before someone gets killed.

Am I the only one who thinks that event was a snoozefest? It was safe but nobody from third or fourth on back “raced” It was strictly follow the car in front and don’t hit him. The new car isn’t doing anything it is supposed to be doing. Too bad the brain trust as usual won’t admit it.

No, you’re not. I took a nap for an hour in the middle of it, but that’s what I do nearly every plate race I watch. I admit, I tuned in due to recent safety issues to see whether they were going to play it safe or send someone into a coma. I’m not at all disappointed the drivers decided to play it safe and live to race another day. What I am disappointed in is NASCAR putting them into that position to begin with.

While the Talladega race was relatively tame, it’s interesting that Stenhouse once again didn’t disappoint, causing one of the few non scheduled cautions. It’s a rare NASCAR plate race when Stenhouse doesn’t cause at least one wreck or caution. Say what you will about him, but if nothing else he is consistent.

Denny won’t be penalized this year he’s the nascar chosen one. Nascar gets lots of TV coverage with Michael Jordan and bubba and Toyota is happy too. I think Noah should be designated to take Hamlin completely out of the race on the first lap.

“I think Noah should be designated to take Hamlin completely out of the race on the first lap.”

That would be swell.