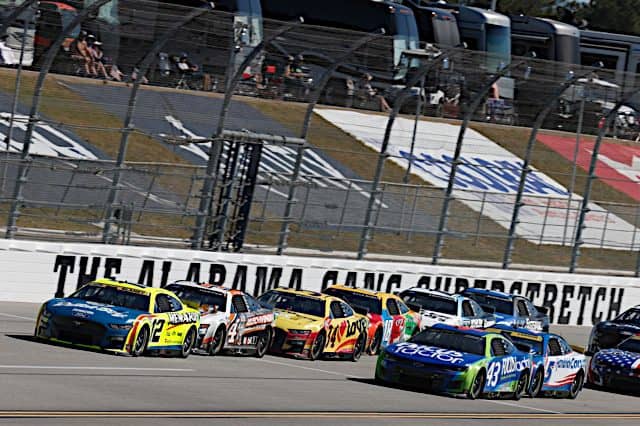 With driver safety being in question with the rear of the car, despite no carnage at [Talladega Superspeedway], but with teams possibly pushing the limit with tire load in the banked corners at the [Charlotte Motor Speedway ROVAL], do you think playoff drivers will force the issue at all, [with it] being an elimination race? — NASCARfan24, YouTube

There was certainly a feeling across the industry that, after the tire-failure-fest at Texas Motor Speedway that put Alex Bowman out of the car for (at least) a week with concussion symptoms, Talladega was risky.

What we saw was a mostly-clean 500 miles that still featured a season-high 57 official lead changes, a last-lap pass for the win and a margin of victory under a tenth of a second. Only an impressively low four cars failed to finish, a far cry from the 13 DNFs in Talladega’s spring race, 10 of which were related to crash damage.

Which bears the question (or at least, NASCARfan24, the implied first part of your question) … were the drivers taking it easy? To that, I answer with another question (and yet another cinematic misquote for NASCAR Mailbox): Were you not entertained?

While Jeff Gluck’s poll rated this race lower than the spring, I fall squarely into the “good race” camp, and I am leaving Alabama with more confidence in the skills of the NASCAR Cup Series field than I have had in a while.

They kept it clean, they drove smarter and still put on a good show. If the Cup Series field survived Talladega, they can survive anywhere.

But that doesn’t mean they will. Since 2018, the ROVAL has been angling to take Talladega’s crown as the meanest track on the schedule, and this might be the year the newcomer finally usurps the legend. Or will it?

I’m going to go out on a limb here: the ROVAL will never again be as wild as it was in its first two races in 2018 and ’19. As the teams and drivers have better learned what to expect from the combination oval-road course (assisted by occasional trips to the infield road course/high banks combo at Daytona International Speedway) we’ve seen a lot fewer leaders drive straight into the tire wall at the TUMS Heartburn Turn on restarts.

With this Next Gen car and its inability to safely disperse the force of an impact from the rear, there’s going to be increased risk (compared to the Gen 6) every time the engines fire until the rear clips are redesigned.

I’m just not convinced the ROVAL is any more of a wild card than any other race left this season.

Racing at the front of the field at road courses has been largely subdued, even amid the chaos of Indianapolis Motor Speedway, which will likely leave many playoff contenders in a conservative points-racing mode. And the ROVAL is one of the few facilities that saw a full Next Gen test in 2021, giving teams a better chance at understanding how the new 18-inch Goodyears might handle the loads (even if, according to No. 4 crew chief Rodney Childers, all the teams will push beyond the limit of recommended specs).

Just to be clear.. This weekend will be my official 600th race as a crew chief in the cup series.. And I have raced below the published minimum in 599 races. Anyone that knows me knows I don’t BS. This isn’t one persons fault, it’s everyone’s fault. From the top to the bottom. https://t.co/4UkvGmmxGF

But I’ve long since given up trying to predict what will happen in the 2022 NASCAR Cup Series season. It could just as easily be the opposite.

Not related to ‘Dega, but with the news today that [AJ] Allmendinger is returning to Cup [with Kaulig Racing], a) do you think it’s a good move, and b) how well do you see him performing next season? — The Spotters Stand, YouTube

If there’s one thing we’ve learned from the 2022 racing silly season, it’s to not say a driver will be at a certain team until we’ve heard it from both parties … and maybe not even then.

So, while The Athletic and other publications have reported that AJ Allmendinger is likely to return to the Cup Series full time in 2023 driving Kaulig Racing’s No. 16 Chevrolet, I’m not yet willing to say it’s any more than a rumor, at least until the much-anticipated driver announcement on Oct. 5.

You're definitely not going to want to miss the Kaulig Racing Fan Day on October 5th! 👀 pic.twitter.com/njssFI2GWa

That being said, I’ve addressed Allmendinger’s prospects of a Cup Series return in this column before, and with an announcement likely on the horizon, it’s a perfect time to revisit the question.

I concluded in July that teams weren’t considering Allmendinger because he’s an experienced hand, and that doesn’t fit the image that teams from 23XI Racing to Richard Childress Racing to RFK Racing want to present to the world as organizations aimed toward the future.

However, Matt Kaulig’s approach to NASCAR team ownership isn’t about selling his team as the future of the sport. He’s guided by just two words:

When Allmendinger dropped to a part-time Xfinity Series campaign after being released from JTG Daugherty Racing before 2019, I don’t know if anyone expected the then-37-year-old Californian to emerge as one of the stars of a NASCAR series marketed for its role in developing young talent.

Names are made here!

Even as Kaulig’s Xfinity Series program has taken a bit of a step back in terms of oval-track pace, Allmendinger’s dogged consistency and standout runs on road courses (and this weekend at Talladega) ensured his second consecutive regular-season championship and gives him a solid shot at the playoff title. Kaulig and Allmendinger in the NASCAR Xfinity Series is one of the most successful (if unexpected) combinations in the last half-decade.

Changing it would be a mistake.

Allmendinger has scored one top five and five top 10s in 17 Cup Series starts in 2022. He contended for wins in the closing laps at both Circuit of the Americas and Watkins Glen International and scored an impressive ninth place at WWT Raceway after skipping practice and qualifying to race (and win) at Portland International Raceway in the Xfinity Series.

His 2022 Cup season has been solid, for sure. It hasn’t been incredible. I’d expect the same type of results from the combo next season. So the question is, will either Kaulig or Allmendinger be as energized if they aren’t regularly running up front together? Allmendinger has won 14 times in his Xfinity career, yet he shows no signs of getting numb to the feeling.

I bet if you counted the number of times that drivers have screamed “let’s go” at the top of their lungs in celebration of victory, Allmendinger would lead the pack.

AJ Allmendinger could have just won a race, stepped barefoot on a scorpion or performed a Slipknot song at karaoke night and that's why you have to love the hell out of AJ Allmendinger pic.twitter.com/sRuekktsm0

But Allmendinger’s skills are impressive, and I’m sure he’ll be an asset to a growing Kaulig Cup program. I wouldn’t even count out a win or two on road courses next season. But he could continue to do that on a part-time schedule. Taking him back to Cup full time seems to be a compromise of the “trophy hunting” vision that’s made Kaulig and Allmendinger so dominant in Xfinity.

While I’d put money on a part-time Xfinity campaign for “the Dinger” should he return to the premiere series in ’23, he’d be limited to just five starts in a season that will see the NXS hit eight different road courses.