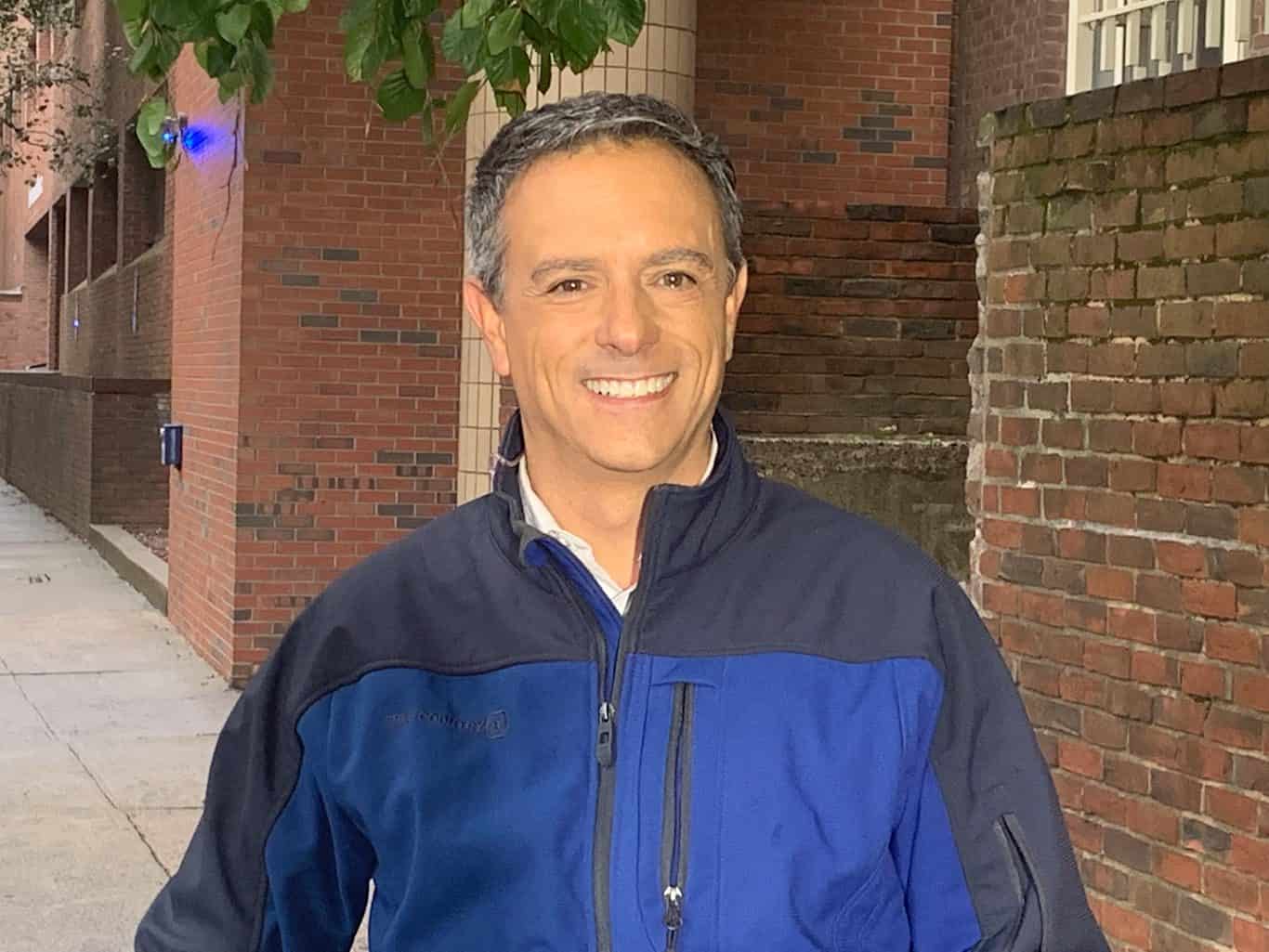 After being out of the NASCAR industry for five years, Mike Massaro returned to serve as the MAVTV pit reporter this season.

The Connecticut native has been with the station that is broadcasting 11 of the 20 ARCA Menards Series races this year while also serving as a reporter for NBC Connecticut.

Frontstretch ARCA editor Mark Kristl spoke to Massaro to learn what he did in between his auto racing TV jobs, his thoughts on covering ARCA for the first time in 2022 and which drivers have impressed him as up-and-coming stars.

Mark Kristl, Frontstretch: How has it been covering auto racing again?

Mike Massaro: It breathes life into my soul again. I’d been away from it for so long, and I forgot how much I really loved it — being a part of the sport and being a part of the broadcast. For a very long time, I didn’t think I was going to have the opportunity to do it again.

Conversely, because it’s not as intense of an environment, I think I’m enjoying it more. I have more access to drivers than I’ve ever had. I’ve gotten to know them as people closer than you could ever do in the Cup Series, which is exciting to me because I know so many of these drivers are the future of NASCAR. So it’s interesting to me to get to know them right now because I can almost see their futures. They have some bright futures, and I’m excited to see them right now before they get there. To be at the embryonic stage of their racing careers, that’s special and you cannot replace that experience.

Kristl: Why did you think you might never cover auto racing again?

Massaro: It had been more than five years, and my phone had not rung. Believe me, I made many phone calls those first couple of years when I was out of it, and there wasn’t any opportunity for me.

So I moved on, and I started working as a reporter and an anchor for the local NBC news affiliate here in Hartford, Conn., — it’s known as NBC Connecticut. I’ve done that for the past three years, and that’s really been my focus. It’s my full-time job.

For the lack of a better way of saying it, I’d given up on covering racing. I just didn’t think that there was a place for me anymore. I was sad about it.

When Bob Dillner called me about this time last year, he wanted to feel me out at the time, and I was really surprised. If they would have said, ‘We’re covering five-year-olds racing go-karts,’ I would’ve said, ‘Yes.’ It didn’t matter to me.

My bosses at NBC Connecticut were really accommodating, and they’ve been great through the course of this year. There have been rainouts — one of them I couldn’t make my shift at NBC, and they didn’t have to allow me to cover the ARCA race, but they did. I’m really grateful.

Kristl: When you left covering NASCAR, what did you do next?

Massaro: I did some freelance stuff. I did a single race for the Ferrari Challenge, and I had an acting cameo in the Amazon Prime show The Boys.

I had not worked full-time for about a year when a friend of mine was a principal at an inner-city high school in Hartford. She was struggling to get substitute teachers, so she asked me if I’d help, and I said yes. I worked as a substitute teacher in that school for a little while, and then I got some additional responsibilities in the school.

I worked with a few students in their ESL program — English as your second language. I was paired with three or four kids who were still learning English but were in either junior high or high school at the time. I did one-on-one tutoring with those kids. I then became the head of the school’s in-school suspension program.

I can only speak English though. So I sat in those kids’ math class, and I would listen to the lesson, and after about 15 minutes into the lesson, I’d take those kids out to a separate room. And I would explain it to them slower. It allowed me to sit down and answer their questions. Honestly, that was the most gratifying part of that phase. It wasn’t my career path, but it was a nice little detour.

Kristl: You’ve done Cup and now ARCA. In some ways, Cup is the shirt and tie while ARCA is a polo and nice blue jeans, at least in terms of publicity, money, etc. How does your ARCA coverage compare to your earlier NASCAR coverage?

Massaro: I came from Stafford Motor Speedway. Around 1994, I started at Stafford as an announcer, I worked as the public relations director for a couple of years and did that for two-three years. Then I got my first TV job, and I moved to Charlotte in 1999. My background is those types of tracks, and I don’t forget that.

As far as what I have for resources, it’s very similar, especially when we go to racetracks with NASCAR there too. For example, at Kansas Speedway, we used a camera person on pit road that is the number one camera person for NBC and FOX. We and I used their broadcast equipment, and they used it for their NASCAR coverage too.

When it’s not a companion race, it is a little different. We still have a big broadcast production truck, but we only have one when Cup has four or four [trucks]. We have to make the most out of using that one truck. MAVTV equipment is still pretty good. It’s different but it’s nothing that has prevented us from putting on a good show every week.

Kristl: What does ARCA need to get more exposure?

Massaro: That’s a tough question. It should get more exposure because it is a part of the NASCAR world, because some of these drivers are the future of the sport. If you’re truly a fan of the sport, you should invest yourself in ARCA. It deserves as much publicity as any other developmental series in a major sport.

Kristl: You’ve traveled to new racetracks this year. Which ones stood out to you?

Massaro: There are so many unique tracks. I love Berlin Raceway, the way they put together their show even off the racetrack with their midway, and I was impressed with what they’ve been able to do there. I really liked Salem [Speedway]. I thought it was cool, I loved those high banks, just the way that they can run up against the wall in turns 3 and 4 with a lot of close high-speed racing.

I’ve been to dirt tracks before but never broadcast from them so that was different for me, especially the Springfield Mile where I was up in the booth. As a racing fan, being able to add some tracks to the list of where I’ve gone was neat, especially some of these historic tracks. There’s been a lot of high points for me on the tour this year.

Kristl: Cup races 36 times a year while you’re only covering 11 ARCA races with MAVTV. How do you stay on top of your game?

Massaro: As a pit reporter, the best stuff I can offer the broadcast is stuff I find out when I get there. Granted, I have to stay in tune with what’s going on with the races, but to keep the storylines fresh, I have to uncover those that race weekend. Most of the stuff a pit reporter brings to the broadcast comes from doing one-on-one interviews with drivers the morning of the race so that it’s fresh, new and relevant. The gap [between races] isn’t as hard as you think about trying to stay on top of it as long as you know what’s going on. My priority is to find stuff out on the day of the race, and the audience benefits the most from that.

Kristl: Which ARCA drivers will be competing for Cup Series wins five-10 years from now?

Massaro: Sammy Smith is at the top of that list. Nick Sanchez, Daniel Dye, Taylor Gray, Corey Heim and Rajah Caruth all will have a shot. Those are the ones who come to mind immediately. There’s lots of talent there. There are a lot of young drivers who have proven they can run up front every week in this series in a competitive environment at some of the same racetracks in similar equipment to what Cup previously ran.

Like many ARCA drivers, Massaro doesn’t know whether he’ll return to MAVTV in 2023, but he added: “We haven’t had those discussions yet, but I’d love to be back.”

Crazy to think I grew up going to Stafford, yet never knew he worked there. Also didnt know he went back to work for the NBC 30 crew! He seemed to vanish after ESPN left the NASCAR world. Solid guy.

It’s great to have Mike and Krista Voda Kelley back doing race broadcasts!
I think Bob Dillner is doing great things at MAVTV.