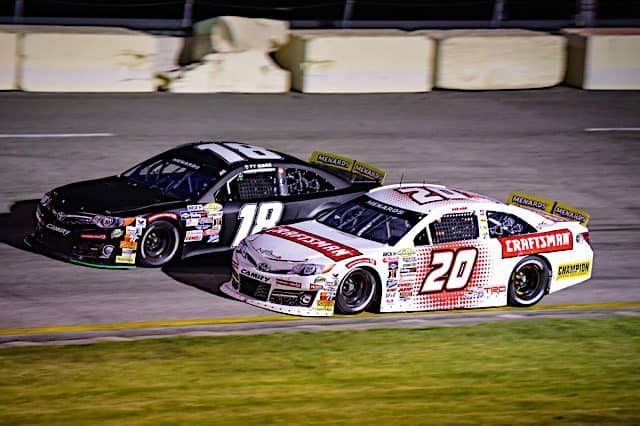 Three trophies are on the line in the Shore Lunch 200 – the race win, the drivers’ championship, and the owners’ points championship.

Although ARCA does not use a playoff format like the national NASCAR series, it is a close battle that could wind up coming down to the last lap of the 200-lap race, like how the 2021 ARCA Menards Series West championship was not decided until its final lap at Phoenix Raceway.

“It still feels like it used to feel in the playoffs,” MAVTV pit reporter Mike Massaro told Frontstretch. “You’ve got two drivers, who while they are separated by two points, they might as well be tied because it’s that tight. It’s exciting and I could not tell you right now who’s going to come away with the championship. They are so evenly matched right now. Dye has a lot of heart, the team is buttoned up, they’re working but on the other side of the coin, Nick’s a good racecar driver and he’s got the wins to show it this year. He is also hungry, so there’s no question that he’s going to make it difficult for Daniel for sure. So, it’s going to be a lot of fun to watch.”

Head-to-head in their ARCA careers, Dye has bested Sanchez 14 out of the 25 times. Sanchez has three wins compared to Dye’s lone victory, but Dye leads Sanchez in both top fives and top 10s. Still, their average finishing position is less than one (Dye has 5.9 vs. Sanchez has 6.6), so these two Chevrolet drivers will likely be racing each other throughout the entire race.

Sanchez has competed twice at Toledo before, finishing 10th and third, respectively. It is encouraging but his Rev Racing team is using a different package in hopes of securing Sanchez the title.

“As much as I am confident going into Toledo, at the end of the day, it’s a new year,” Sanchez continued. “My team is going with a different package so I really cannot look at last year’s race. I think we can be just as good this year; I hope our newer package works and I hope we can do better than third.

“My team is going with a different approach with setup stuff and engine packages; all that changes everything in your notebook. Chevrolet sim programs don’t have a setup for Toledo. That falls into the bigger tracks but these short tracks, there’s no data on them. All you have is your notebook.”

In his second full-time ARCA season, Sanchez is eager to deliver the first ARCA title to Rev and his team owner Max Siegel.

“It would be great,” he added. “Max Siegel deserves this championship not only for me, but for many other people he’s helped in this sport. Kyle Larson won the NASCAR K&N Pro Series East title with him 10 years ago, so it’ll be cool to join him as the only other champion for Rev. It would just be a cool little trophy to have in the house. It’s something you carry with you wherever you go in this sport.”

Toledo this weekend for the last race of the ARCA season. Hoping to close out the championship for @Max_Siegel & everyone at @RevRacin.👊🤞 pic.twitter.com/7K3h97mlSv

Sanchez said he is not close to Dye off-track, but on-track, he has great respect for his championship foe.

“We’ve raced hard but clean throughout the whole year. He’s raced me clean, and I’ll show him that back. I’m sure that’ll carry onto Toledo no matter what the outcome is, and we’ll do our best there.”

Dye is making his first start at Toledo. He is currently riding a five race top-five streak and a 13 race top-10 streak.

We have reached the @ARCA_Racing championship weekend!

Only two points separate our wheelman @danieldye43 from the championship lead heading into @ToledoSpeedway.

Dye has methodically stayed in the hunt for the ARCA title despite three hiccups in the first half of the season.

At Talladega Superspeedway, Dye fought for the lead late, but his spin became the race-ending caution, giving the victory to Sanchez. At Iowa Speedway, Dye was running inside the top five for much of the race before a mechanical failure rendered him with a 17th-place DNF. Finally, at Berlin Raceway, on his way to winning back-to-back races there as he led 192 of the 200 laps, Dye experienced heartbreak when a mechanical gremlin erased his lead and he wound up seventh.

Dye clinched a four-race championship within the main series at Salem Speedway. Can he win the overall championship at Toledo?

Sanchez and Dye will battle for the drivers’ championship, but Smith is looking to win his series-leading sixth race of the season. Even though he missed four races due to his age, Smith is only one point behind fourth place Greg Van Alst in the championship standings.

On the road again. 🛣️

Love started third and finished fourth in his lone ARCA visit to Toledo. The 17-year-old also competed in a late model race there in 2022. He led 79 of the 100 laps in that event en route to a runner-up finish.

Venturini has won four times in 2022, and the team is seeking its first owners’ championship since 2019.

19/20 races complete & just 1 point separates @JoeGibbsRacing & @VenturiniMotor for @ARCA_Racing Owners Championship. In true VMS style we are going to try for all we have & leave it all on the track. Proud that my family team is standing toe to toe with this Goliath. All heart💙

Although four drivers will be vying for two different championship trophies, there are two other ARCA race winners in the field.

Taylor Gray has won three times in 2022, and he has two top fives, with a best finish of third place, and three top 10s in his three ARCA starts at Toledo.

Meanwhile, Grant Enfinger will drive the No. 44. The 2015 ARCA champion, Enfinger has three top fives, with a best finish of second in the first 2011 Toledo event, and three top 10s in eight ARCA Toledo starts. Additionally, Enfinger has scored one pole and led 267 laps there, so he could spoil the championship contenders’ bid for the victory.

The Shore Lunch 200 will take place on Saturday (Oct. 8) at 4 p.m. ET with TV coverage provided by MAVTV Motorsports Network and available on FloRacing.