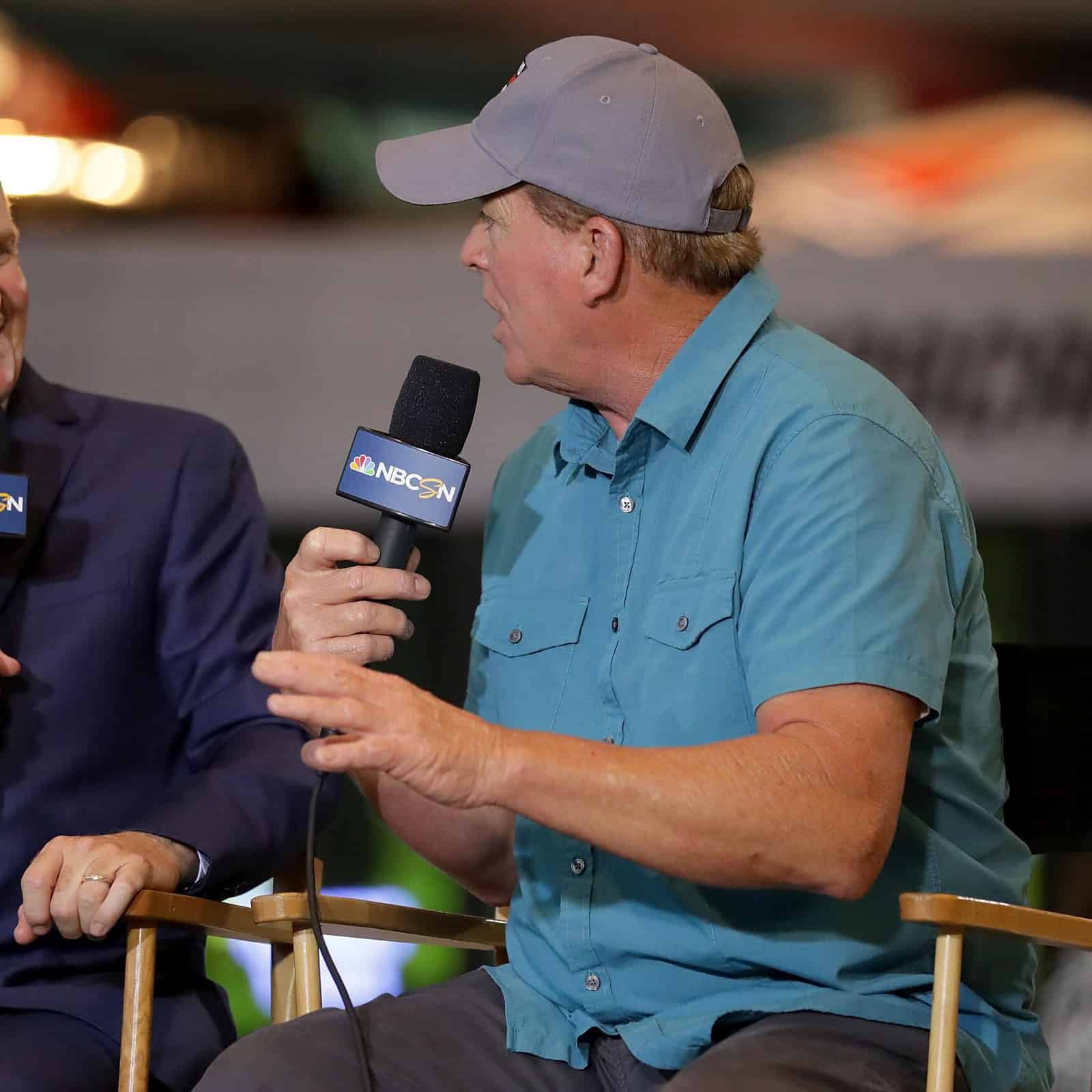 Talladega Superspeedway is traditionally one of the easier races to cover.

Most of the field stays together in a large pack, so it isn’t that tough to keep tabs on nearly everyone. Like most aspects of the NASCAR Cup Series, that has changed a bit with the Next Gen car in that the tow is not particularly all that great behind the car. As a result, it is easier to lose the draft.

The last week and change has not been all that great for NASCAR. The sanctioning body’s integrity has been called into question over the Next Gen car. It seems like they’re firing back, but with an old-school response that comes off as rather tone-deaf.

The Athletic reported last week that during a drivers’ council meeting, Jeff Burton, who heads the council, told the assembled drivers on a Zoom call to go through “the proper channels” in order to voice their opinions on the Next Gen car instead of talking to the media about it.

That went over like a fart in a crowded elevator.

Denny Hamlin was likely the most vocal about the issue in Talladega and placed blame solely on management for the problems. During his media availability Saturday (Oct. 1), Hamlin said this:

When Sunday’s broadcast started, NBC had Hamlin on Countdown to Green on pit road to discuss the issues. You ended up with a very different Hamlin that was saying things like, “We need NASCAR to save us from ourselves.”

I was in the media center at Talladega when this aired. It came off as quite strange. It was pretty obvious to me what happened.

NASCAR appears to have gotten to Hamlin and told him to change his tone (Hamlin did note during the interview that he had spoken with NASCAR representatives prior to the NBC interview). Perhaps they also hit him with a secret fine for disparaging management. I don’t know whether that’s true or not, but it wouldn’t be the first time that NASCAR has done that. Regardless, it is not a good look for the sport.

Also, Burton is supposed to be an employee of NBC Sports, not NASCAR. Yes, his track record is that of “The Mayor” from when he was still racing, but “the proper channels” were way easier for him to approach.

For the first seven years of Burton’s Cup career, Bill France Jr. was still in the garage every week and actually talked to people. A cancer diagnosis took France off the road after 2000. He handed the reins to Mike Helton, who was a regular sight at the track as well. You could talk to those guys.

More recently, it’s a lot more difficult. Brian France was largely an absentee leader, focused on other things, often to the sport’s detriment. More recently than that, Jim France doesn’t really talk to anyone publicly about NASCAR, but rules from the background. He’s much more in tune with IMSA. As a result, the highest people on the food chain that drivers can talk to are people like Steve Phelps and Steve O’Donnell, and they may not have the power to do anything directly.

While it’s probably a good idea to have a liaison between the drivers and management in some contexts, I’m not sure if Burton’s the right guy here. In this situation, he comes off as a shill for management, even if his heart was in the right place. Perhaps he was unaware just how much the drivers had already complained about the Next Gen issues to NASCAR and gotten stonewalled. The drivers’ council may need to consider hiring someone going forward as a formal liaison as opposed to an informal one.

With Dale Earnhardt Jr. in the fold, NBC Sports has likely the best superspeedway racer of the past 25 years in its pocket. At times Sunday, it seemed like the roles were inverted in the booth. Earnhardt would effectively be doing play-by-play while Rick Allen was basically an analyst. While Earnhardt has knowledge in pallets from his 18 years in Cup, Allen has never driven a racecar in anger before — that I know of. In essence, Earnhardt easing into a play-by-play during a Cup race can render Allen useless. That’s not necessarily a good thing.

For a decent amount of the race, the on-track action was described as being similar to the NASCAR Camping World Truck Series events there. I can buy that. Those races often have two lanes of action, and it’s tough to do anything with the cars on the inside line.

Unlike the truck race, the YellaWood 500 was far more competitive. The fear going into the race was that there would be some kind of outright protest from the drivers because of the safety issues, not dissimilar to the 2009 AMP Energy 500, when NASCAR announced race morning that bump-drafting in the turns was banned.

It’s hard to say whether that was the case or not. There were still 57 lead changes in the race, 16 more than in the spring. If they were being careful and still racking up that number of changes, that says a lot.  Having said that, there were some teams dropping back during the race. Some learned, as noted above, you can’t hang back that far.

The booth acknowledged this strategy. Burton argued that you didn’t really learn all that much by doing that. It might keep you out of trouble, but you might not know what to do when you get to the end.

Post-race coverage was rather substantial since the race ran shorter than expected. NBC had a four-hour timeslot for the race, and the race time was just under three hours and 16 minutes. Being there, it didn’t feel like 3:16 to me. It felt more like 2:50.

NBC provided viewers with a series of post-race interviews and a check of the all-important points.  However, those interviews were all with playoff contenders. Michael McDowell didn’t get any TV time despite finishing third. No worries on our end. I got video of McDowell after the race and submitted it for Frontstretch’s YouTube channel.

I also wrote a sidebar on McDowell and Todd Gilliland for the site as well. Unfortunately, both Gilliland and team owner Bob Jenkins skedaddled out of Talladega before we could talk to them.

Yes, we’re in the thick of the playoffs right now. That doesn’t mean that you ignore non-playoff drivers after these races. Heck, given the performances we’ve seen from non-playoff teams so far, you’d think they would have re-thought that protocol by now. In these regards, NBC should treat these races the same as they treat regular-season races.

There are stories that come out of these events that may not involve playoff contenders. That doesn’t mean that you ignore them. They still deserve their time.

Overall, Sunday’s race was pretty average for a Talladega race broadcast. There was a fair amount of time spent on the likelihood of big ol’ wrecks prior to the race, then there wasn’t really any wrecking after lap 45. I thought the montage was a bit gratuitous.

With the type of racing that we had Sunday, it appeared that the booth was a little frustrated at times. It is harder to pass at Talladega today, and it seems that a number of drivers waited too long to do anything. A lot of the commentary late in the race was centered upon that (“If you’re outside of the top 10, you’ve got to go now!”). Despite that frustration, we ended up with a good finish and a somewhat cheaper Talladega race than normal … unless you’re Wood Brothers Racing. Then it was rather expensive.

That’s all for this week. Next weekend, the NASCAR Cup and Xfinity series will be racing on the ROVAL at Charlotte Motor Speedway. In addition, Formula One returns to Suzuka Circuit in Japan, and the ARCA Menards Series will wrap up its season at Toledo Speedway. You might remember what happened the last time ARCA did that. TV listings are in the Television drop-down menu above, or right here.

We will provide a critique of both of the ROVAL races in next week’s edition of Couch Potato Tuesday. The Critic’s Annex will cover Saturday’s Chevy Silverado 250 for the NASCAR Camping World Truck Series.

2 superstar drivers – one a past champion – are out of playoff competition due to concussion protocols. That needs to be freely discussed without any censorship by one side or the other. That is not happening.

I imagine the conversation between NASCAR and Hamlin was pretty much two sentences from NASCAR; “You’ve got a good shot at the Championship this year. Would be a shame if something like a pit road speeding violation at a critical moment ruined that for you.”

As for a representative for the Driver’s Council, I’ve never met the guy, but I think Jeff Burton is too nice. He tries to play the game and not make waves. But in a situation like this where driver safety is a real, tangible concern you need someone with the temperament of a Pit Bull – someone that will go in there with HUGE attitude and bring the fight, bite hard, and not relent until they win. Jeff Burton isn’t that guy.

there were more green flag pit stops this past weekend and before. not many pit stops under caution. maybe that helped to contribute to the 57 lead changes.

How many “lead changes” were by a maximum of three coats of paint?

Sorry been a crazy week

Well, the first green flag stop had the 3 manufacturers all trying to pit together at different times, so that led to 6 of the 17 different drivers that led laps (2 for each manufacturer, likely each front runner during the green flag stops led at least for a foot or two). Then figure in how many of the 57 lead changes were the same two cars just going back and forth depending which lane had the bigger push. IMO lead changes, especially at a plate race, are not a good indicator of a good race. You can have an excellent race even with a runaway winner assuming there are competitive battles behind the leader. Of course, TV has to show that to the viewer…

Last edited 1 month ago by Jeremy
2
0

The only person who considers squeaky Jeff Burton an authority is Jeff Burton.

I have to turn down the volume in order to avoid ear pain with those two guys screeching. Almost as bad as Larry’s CAUTION CAUTION!!!!!!!!!