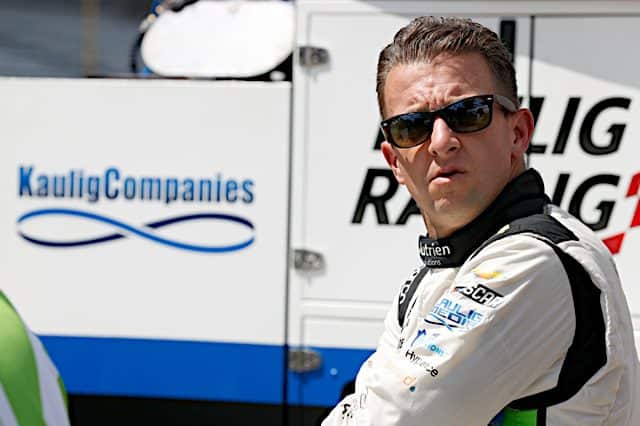 Did You Notice? … How rare it is for AJ Allmendinger to have a full-time NASCAR Cup Series opportunity return years after he left the series behind?

Allmendinger, in a move first reported by The Athletic, will become the full-time driver of Kaulig Racing’s No. 16 Cup program in 2023, an announcement likely made by the time you read this Wednesday (Oct. 5).

The two-time Cup winner will return a full four seasons after he left the Cup Series in shambles, released from his ride at JTG Daugherty Racing’s No. 47 Chevrolet at the end of 2018. It’s been a long, slow rebuilding process for the ‘Dinger at Kaulig, where he’s worked his way back into competitive shape in the NASCAR Xfinity Series. Winning a dozen times in 77 starts over the past four seasons, an impressive 15.5% clip, he’s a favorite to make the NXS Championship 4 a second straight year.

Expectations will be high after Allmendinger won during a limited Cup schedule the last two seasons at Kaulig, reaching victory lane in the inaugural road course race at Indianapolis Motor Speedway in 2021. He nearly tacked on a second one at Circuit of the Americas this March before Ross Chastain bumped him out of the way.

How rare is this type of opportunity, climbing back up the ladder into a car that has a chance to win? What’s so unique for AJ is the number of years he’s spent away from the Cup Series. Looking back over the past 30 years, most drivers who have returned from a year off or scaled back to part-time before ramping back up were already well established in their careers, left with little to prove.

That group includes drivers like Hall of Famer Mark Martin, who scaled back to a limited schedule for two seasons before returning full time with Hendrick Motorsports in 2009. He’s by far the biggest success story, winning five times that first year and finishing second in the championship standings. Martin, back in the 1980s, also spent four years rehabbing his career in both ASA and the NASCAR Xfinity (then Busch) Series before hooking up with Jack Roush to restart his Cup career for good in 1988. Keep in mind Martin was in his 20s; Allmendinger will turn 41 in December.

Most others in the “unretired” category found themselves struggling to compete. Matt Kenseth underwhelmed in 2020, posting the worst average finish of his Cup career (21.4) and just two top 10s when he replaced Kyle Larson at Chip Ganassi Racing after a full year off. Ricky Rudd fared even worse, posting his worst average (26.3) and just one top-10 finish for a dying Robert Yates Racing program in 2007. Brian Vickers wound up faring slightly better, winning a race with Michael Waltrip Racing in 2013 before struggling in his full-time Cup return in 2014 after stepping away briefly for health reasons.

Perhaps the closest thing to an Allmendinger comparison is former Indy 500 winner Sam Hornish Jr., who ran just three full-time Cup seasons before getting kicked to the curb after 2010. Hornish had a four-year gap away from running full-time, paired with a learning curve similar to Allmendinger’s open-wheel background.

Unfortunately, Hornish’s return to the series was a disaster, scoring just three top 10s in 2015 before quietly getting pushed aside at Richard Petty Motorsports. 36 years old at the time of his release, the former open-wheel star ran just a handful of NASCAR races afterward and is now fully retired.

But Hornish, like Allmendinger, rebuilt himself during those years away in NXS, gaining the experience and the confidence needed to move back up. He just never had the proper infrastructure surrounding him at the Cup level, pairing with Richard Petty Motorsports at one of its low points. You’d have to argue Allmendinger steps into Kaulig’s Cup program in better shape and with a longer, more consistent track record of NASCAR success.

Alex Bowman also technically fits here; he was seemingly washed up after running full-time for a series of underfunded Cup teams in the mid-2010s. Bowman caught a break subbing for an injured Dale Earnhardt Jr., nearly winning a race in 2016, before taking a year as a test driver for HMS in hopes of rising to Cup again and running Earnhardt’s No. 88. Since then, Bowman has been solid, winning seven times and securing five straight playoff appearances.

But in that case, Bowman also went through a career transformation in his early 20s while partnered with the best NASCAR team of the past 25 years. Ross Chastain‘s road was similar to Bowman’s, but he, also, was only part-time for a year, running successfully in the NASCAR Camping World Truck Series before getting tapped by Ganassi to replace Kenseth in 2021.

Looking further back, a few others rotated between the Xfinity (then Busch) and Cup Series with limited success. Todd Bodine and Kenny Wallace had several chances with mid-tier Cup organizations from the mid-1990s to the early 2000s. Chad Little ran for his family-owned team in Cup, struggled, won in Busch/Xfinity and then was picked up by Jack Roush in 1997. None of these drivers won at the Cup level.

Moving back to 2022, others are trying Allmendinger’s strategy, albeit with the running theme of once again being much younger. Talladega Superspeedway Truck Series winner Matt DiBenedetto moved down there this season with his eyes on rebuilding after getting released by Wood Brothers Racing in Cup. Fellow Truck veteran John Hunter Nemechek is hoping for a long-term climb up the path of Toyota’s ladder after leaving a full-time Cup opportunity at Front Row Motorsports after just one season (2020).

Even at Kaulig, who knows what will happen with Daniel Hemric long-term in his bid to once again move up. The reigning NASCAR Xfinity Series champion was ditched by Richard Childress Racing in Cup after winning Rookie of the Year in 2019. There’s also Ryan Preece, Trevor Bayne … the list of “hopefuls” and “maybe somedays” latching on with top-tier minor league rides after a failed tenure in Cup could run on for a whole other column.

As of Wednesday, Allmendinger differentiates from all others: his career comeback is fully complete. And he did it after — this fact cannot be stressed enough — four years away from running the series full-time, kicked out of a ride just before turning age 37. That’s one year after Hornish got released from his second Cup ride and puts the ‘Dinger in a comeback class all his own.

It also removes some of the pressure surrounding 2023 and Kaulig’s heightened expectations. Part of what I think has driven the likable Californian’s success this second time around is how much fun he’s having inside the racecar. It’s like he views this recent run of good fortune as borrowed time, Kaulig is the second chance he was never supposed to get.

Looks like we’re about to find out next season whether the 40-somethings are, indeed, washed up after all.

Did You Notice? … The difference in Chase Elliott’s push for the title in 2022 versus his other seasons in the Cup Series? I’d argue it’s the first time he was the favorite entering the postseason, unlike 2020 (where he snuck up on everyone, winning the last two races at Martinsville Speedway and Phoenix Raceway). 2021 was spent playing second fiddle, it seemed, to Kyle Larson laying waste to the rest of the field.

As I wrote this week on CBS Sports, it’s what makes Elliott’s Talladega Superspeedway victory a potential inflection point on his career. He now has five wins this season, two more than anyone else in a year where the Next Gen has kept virtually anyone from running consistently up front. A Championship 4 appearance seems likely, as Elliott has a huge edge over his competitors in bonus points entering the Round of 8 with most of the bad luck (in theory) fully behind him.

Once there, Elliott would compete for a second title in three years, a feat not accomplished since former teammate Jimmie Johnson’s run of five straight championships from 2006-10. At 26 years old, his second title would leave him on pace with Jeff Gordon, who wound up with four, and well ahead of Dale Earnhardt and Johnson (neither of whom even ran Cup full-time before age 26).

One step at a time for Elliott, right? But it’s a 180-degree turnaround for him after entering the Talladega weekend in tougher shape.

it will be interesting to see how aj adapts to this new cup car.

hopefully by next season the car will be better.

i like seeing aj race. he was so happy last saturday at dega.

I have definitely noticed AJ’s fall and subsequent rise. His nasty spat with Richard Petty in the garage was televised for all to see. His termination from Cup was probably the low point in his life that he needed to experience in order to turn things around. I am happy for him and root for him every chance I get.

AJ’s probably the only person who knows the whole story about his failed drug test. But W/O it, I expect that his stats would have compared favorably with Logano, & Brad, & he wouldn’t have needed a second chance.
As for his time in the 47, he won a race for them, & then he didn’t, & they fired him. How many have they won since? It’s just not a winning team, wasn’t then, isn’t now.
I would have to give Matt Kaulig high marks for his people skills in seeing what AJ could bring to the team. I still think they’re a step behind on their cars but that seems to be getting better.

Count me as one who hopes he does really well back in Cup!

AJ is a favorite driver of mine and, incidentally, we share the same birthday. Hope his move back to Cup is successful. He’s one of the good guys.