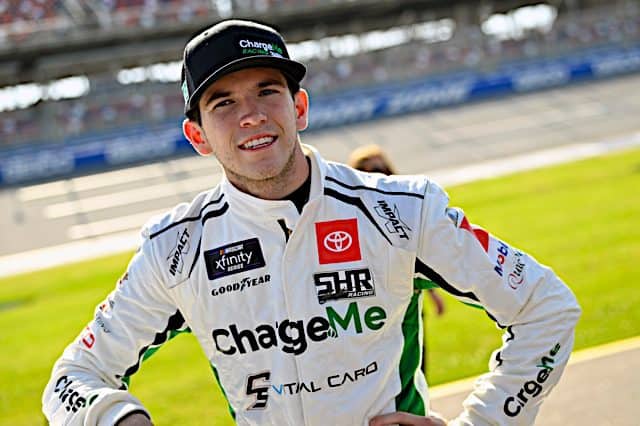 The NASCAR Xfinity Series will look a lot different in 2023.

Noah Gragson is moving up to the NASCAR Cup Series with Petty GMS Racing, and although it hasn’t been made official, Ty Gibbs is likely graduating to Cup, too, succeeding Kyle Busch at Joe Gibbs Racing.

Most recently, on Monday (Oct. 4), The Athletic’s Jordan Bianchi shared that his sources say that AJ Allmendinger is on his way to the No. 16 Kaulig Racing Cup entry full-time in 2023.

See also
Did You Notice?: The Rarity of AJ Allmendinger's NASCAR 2nd Chance

The departures of Gragson, Gibbs and Allmendinger leave a major void in the NASCAR Xfinity Series roster. One name that has been mentioned several times before in this column is Chandler Smith, but his name isn’t linked to a Toyota team. Instead, it’s Chevrolet’s Kaulig Racing.

This one was too easy.

Chandler Smith to Kaulig in 2023! pic.twitter.com/TKfgAN54UV

Smith would be a unique choice for Kaulig. If they hired him, it would not be a total shock. However, it would be against the grain compared to other hires by them.

When you look at that list of drivers, they all have something in common — with two exceptions — experience. The first exception is Zane Smith. He made a single start for the team in 2021, when he substituted at Dover Motor Speedway when Haley was sidelined by a positive COVID-19 test. The other exception is Haley himself.

Why is Haley an exception to the rule? He was young, and had the least amount of experience compared to the rest of the drivers Kaulig has hired throughout its lifetime. Kaulig’s first driver was Koch in 2016, who had run all or most of each season dating back to 2011. Dillon made a one-off start in 2018 and four more in 2019, but he had a plethora of experience and two NASCAR championships. Truex succeeded Koch in 2018, but made his first national series start at the age of 18 back in 2010.

Allmendinger was the next driver to take the helm of a Kaulig Chevrolet. He had CART wins and hundreds of Cup Series starts before his first race. Chastain was in a similar boat to Allmendinger, as he made his first national start in 2011 in the Camping World Truck Series and had run several full seasons with JD Motorsports.

Sadler had over two decades of NASCAR experience before starting two races for the team in 2019. Most recently, Burton, Cassill and Hemric either had multiple full seasons in Xfinity or had several seasons’ worth of starts in all of NASCAR’s national touring series before joining Kaulig.

Only Haley breaks this mold. He was hired in 2019 to replace Truex. Haley had select Truck starts before turning 18 and ran two entire seasons of Trucks in 2017-18. He raced with the team for three full Xfinity seasons and is now in Cup with them.

The choice to pick Chandler Smith, whether as the successor to the No. 16 or another Kaulig car, would be unique and just as much of a mold-breaker as Haley was. Smith has only made two Xfinity Series starts, similar to Haley, who had three starts in 2018 with GMS Racing.

2022 is only Smith’s second full season in one of NASCAR’s touring series. He never ran a full season of the ARCA Menards Series, despite winning nine races between 2018-20 while only starting 33 of the 60 races in that period.

Which is an excellent segue into “why” Matt Kaulig and team president Chris Rice are looking to go in the direction they are going.

Kaulig has traditionally hired drivers based on on-track experience, particularly full-time drivers, not necessarily on-track success. When you add up all the wins drivers accumulated in NASCAR’s top three divisions before making their first start with Kaulig (excluding Smith), Dillon and Sadler account for 34 of the 42 victories. That means that all the other drivers had a combined eight race wins.

On the other hand, Smith has five career Truck victories in his 43 starts. Look a little deeper with Smith; you’ll find that he has those 10 ARCA Menards Series victories, too, with nine coming before he made the full-time move to Trucks.

That is a staggering statistic when you think about it. Kaulig has had a lot of success in the Xfinity Series though. Twelve of Allmendinger’s 14 career Xfinity victories have come while driving a Kaulig machine. Burton picked up his first Xfinity win in April 2021 at Talladega Superspeedway, and Haley has been masterful on superspeedways, winning four times. And let’s not forget that Chastain picked up the team’s first-ever win at Daytona International Speedway in July 2019.

Smith is ready for the Xfinity Series. Anyone who questions that hasn’t seen him consistently be one of the two best trucks week in and week out in the Truck Series this season.

Does he fit the Kaulig Racing mold? I think he reshapes it if he joins. Smith won’t blow it up, and moving forward, every driver Kaulig hires wouldn’t be a young up-and-coming talent. Rather, Smith would be the next driver Kaulig grooms for the Cup Series — whether that be for Kaulig itself or another Chevrolet team.

One question that comes to mind with Allmendinger moving back up to Cup, though, is how long he’ll be there. He turns 41 years old in December and has the talent to race for many seasons if he chooses to. Another question is if Allmendinger is prepping the No. 16 Cup team for a different full-time driver in two years, or if he stays until he’s no longer having fun. Is Smith the chosen driver to one day race alongside Haley full-time in the Cup Series for them?

Smith would break the Kaulig mold in both experience and prior success. Chris Rice told Frontstretch’s own Dalton Hopkins after the Xfinity race at Talladega on Saturday (Oct. 1) that if Smith wants to go Xfinity racing, he should give him a call.

That call has likely already been made.