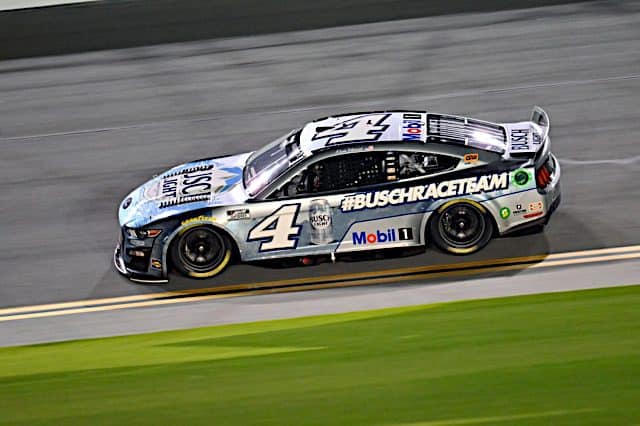 The No. 4 Stewart-Haas Racing team was also deducted 100 owner points.

In addition, crew chief Rodney Childers will sit out the next four races starting Sunday at the Charlotte Motor Speedway ROVAL, as well as being fined $100,000. He will be eligible to return for the Championship finale Nov. 6 at Phoenix Raceway.

See also
Couch Potato Wednesday: Should a TV Analyst Step Into a Conflict Between Drivers & NASCAR?

Harvick finished 29th at Talladega Superspeedway. His car was brought to the NASCAR Research & Development Center after the race.

Also, Andrew Abbott — crew chief on the No. 20 in the Camping World Truck Series — has been indefinitely suspended for a behavioral violation. He has been ordered to complete anger management training as a pre-requisite for his reinstatement.

chase elliott will be next.nascar telling the drivers we are bigger than you.

Denny changed his vocal criticism of nascar in less than an hour. But he’s always been a CS.

Nothing will happen to Chase – he’s the Golden Goose that drives for NASCAR’s God. Now Harvick on the other hand… he’s going to be the whipping boy until he shapes up and toes the line like Denny!

A pit road speeding penalty during the race AND they “randomly” select the 29th place car (2nd car 1 lap down) to thoroughly inspect? Yeah, that smells right.

I thought Denny was a bit too vocal as well. Although, he kissed some ass after his original statement, so that probably helps.

BEN
Reply to  Bill B

well just as i though Awaiting for approval by the masters

AAAHHH ! hendricknascar must be short on funds for the upcoming chevy awards banquet !

Kevin in SoCal
Reply to  CHIEF

I remember in recent years it was the Gibbs show that NASCAR favored. The conspiracy theorists change their story regularly.

Thou shall not blaspheme NA$CAR!!!

Why don’t they take away a win from him this season, since points pretty much don’t mean squat anymore.

Tom B
Reply to  Kicks

That “crappy part” should be the second most important part of the this story.