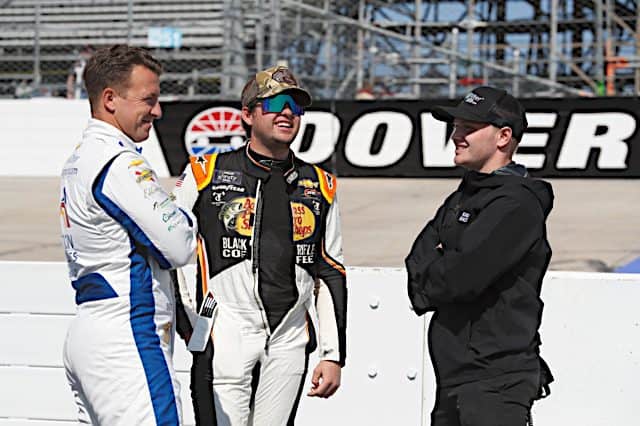 The silly season is starting to wrap up as more and more announcements have helped paint the picture of just who will be where in 2023. An announcement came on Wednesday (Oct. 5) that AJ Allmendinger will drive the No. 16 Kaulig Racing Chevrolet full-time in the NASCAR Cup Series in 2023. Allmendinger hasn’t driven full-time in the Cup Series since the 2018 season; meanwhile Justin Haley will begin his third consecutive full-time season.

The NASCAR Cup Series schedule has changed significantly since Allmendinger last ran for a championship and he is with arguably his best team in the Cup Series not named Team Penske. That has brought up the debate — who will have a better season in 2023? Allmendinger or Haley? Clayton Caldwell and Michael Nebbia debate.

Allmendinger is the kind of driver who can win anywhere. He has proven that the last few seasons in the NASCAR Xfinity Series, winning at not only road courses but also at a wide variety of tracks. They include victories at Atlanta Motor Speedway, Las Vegas Motor Speedway, Michigan International Speedway and Bristol Motor Speedway.

However, the biggest reason why I think Allmendinger will make the playoffs is the amount of road courses on the Cup Series schedule, which plays right into his hands. Allmendinger left the Cup Series in 2018 and at the time, there were still only three road courses on the schedule. In 2023, there will be six, including a street course which most Cup drivers have never raced on.

See also
Did You Notice?: The Rarity of AJ Allmendinger's NASCAR 2nd Chance

Allmendinger also doesn’t have much learning to do.

He has proven in his racing career that he can adapt to any style of racing and be successful. Whether it’s open-wheel or cars with fenders — Allmendinger has raced a lot and won a lot. He also has some experience in this new Cup car, running a good amount of races in this new car in 2022 so he’s not coming in completely blind. He’s also driving with a team he is familiar with and the amount of resources that Matt Kaulig pumps into this team is impressive.

There’s no doubt the No. 16 Chevrolet will be given a ton of resources to win, arguably more than any team in his career outside his brief stay at Penske.

I have confidence that Allmendinger will succeed in this ride. No matter the car, medium or racetrack Allmendinger seems to perform well when given a good opportunity. He will find his way and when he does — look out. He will win and win a lot. That’s why I think Allmendinger will make the playoffs because he’s an extremely talented racer and you can’t keep talented racers down. I think he’s got more skill than Haley and has more experience. That will put him at the top of Kaulig Racing in 2023. – Michael Nebbia

Haley Will Carry the Flag

The first year of Cup Series racing for Kaulig Racing was going to have some growing pains. Everyone knew that. Mix that in with a young driver and I think you can look at Haley’s 2022 season as just that. A year that was needed for both team and driver. He currently sits 23rd in the Cup Series standings but I think heading into 2023, Haley will carry the organization’s banner and have a better year than Allmendinger.

I get why some may say Allmendinger is the choice and he will certainly be hard to beat, but I think Haley is up for the task.

When you look at Haley’s success in the Xfinity Series, there is no doubt that the talent is there. In both the 2020 and 2021 seasons Haley was one of the best drivers in the division and racked up four victories, all four coming at superspeedways. Superspeedway racing is a discipline where Haley has shined, but he also has shown some versatility, running up front and getting top-five finishes at all types of tracks, not just superspeedways. I think more of that versatility will be shown in 2023.

Plus, Allmendinger has certainly had some nice seasons in the Xfinity Series the past few years, but he hasn’t run Cup full-time since 2018. That’s four years of being away from the division and a lot has changed. It may be better for a young driver who doesn’t have as much to unlearn as Allmendinger does. Plus, Haley had a full season of this new car under his belt and as long as it doesn’t drastically change in 2023, I think that will be a huge benefit for him.

However, what I am really excited about for Haley is to see what he does entering a season without change. I believe the magic of winning races and being successful the chemistry between crew chief and driver. Haley will be in his second year with crew chief Trent Owens, and he will benefit from the year of experience.

Don’t sleep on Owens, either. Owens is a talented crew chief who has had some success in Cup. Remember when Chris Buescher had an impressive run of 16 straight top-20 finishes in 2019? His crew chief that season was Trent Owens. Everywhere Owens has gone he’s been successful or made that team better. Buescher was in his second year with Owens that season as well and it was his breakout season. I think the same thing will happen with Haley in 2023!

In the end, I think with a year of experience in these Cup cars under his belt and the fact that nothing has changed for Haley entering 2023 means big things for him. That means a big season is coming for Haley and he will carry the banner for Kaulig Racing. – Clayton Caldwell

My $$ would be on AJ. He will have a huge edge on road courses, but I expect him to be better across the board.
That having been said, Kaulig will need to give him a faster car if he’s to win on his own merits, vs having it handed to him like his Indy victory.
But as he, & Derick Cope proved, to have it handed to you. You have to be there to take the handoff. In today’s environment it’s far from rare for a 3rd place car to take the win.
Best of luck to the entire team for ’23.