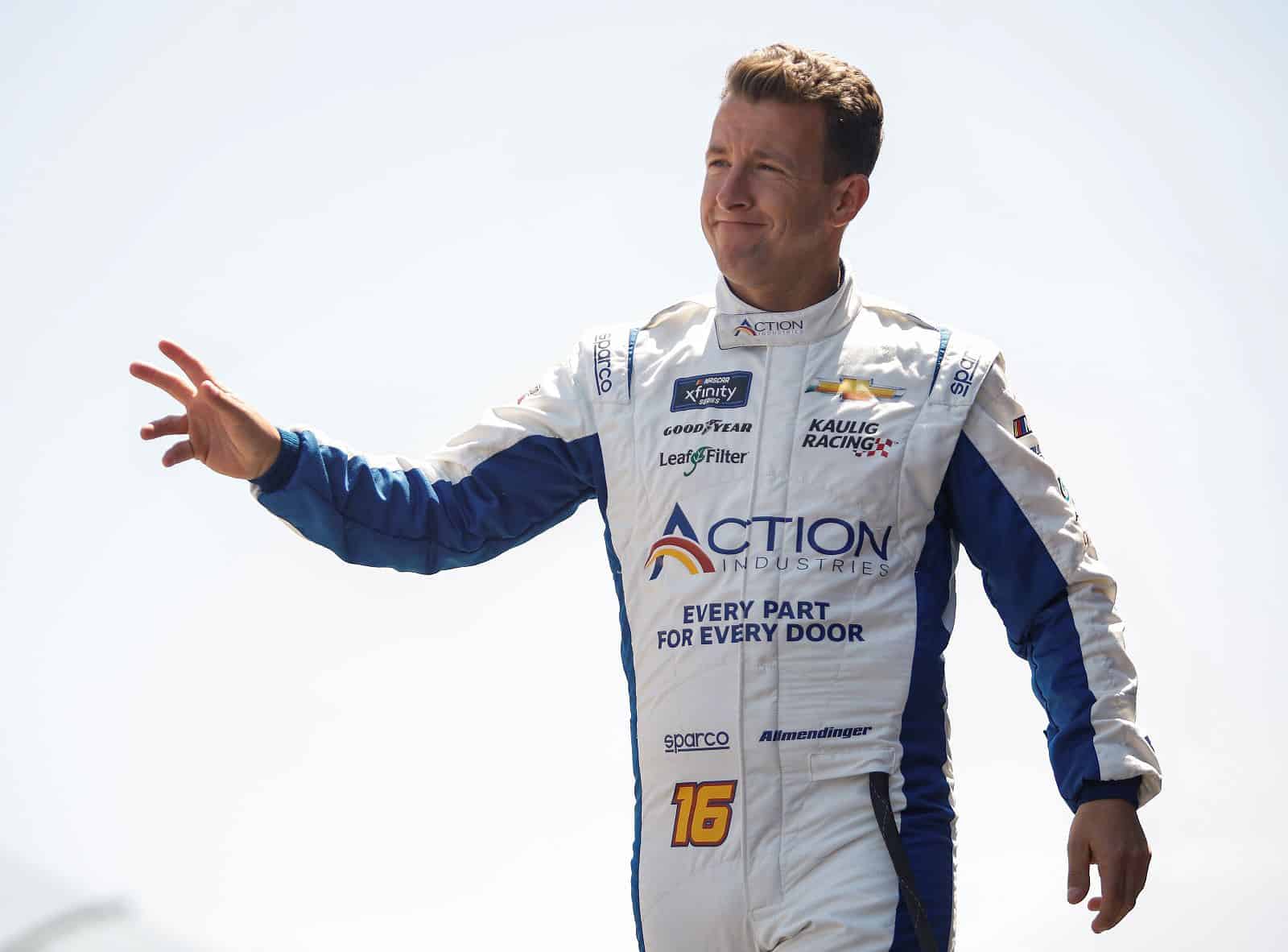 AJ Allmendinger hasn’t run a full-time NASCAR Cup Series season since 2018. He last made a Cup playoffs field in 2014.

And yet there’s not just a very good chance he’ll be part of the Cup playoffs in 2023 — he may also improve upon his career-best points finish of 13th achieved in 2014.

The mere idea of it goes against virtually every NASCAR trend of the past few years. Drivers don’t tend to bounce back into the Cup Series after moving down to a lower national series such as the NASCAR Xfinity Series. And when they do, they’re not immediately treated as a potential postseason contender.

Ty Dillon, for example. Ran a few races in Cup last year after losing his full-time ride and competed even more in Xfinity. Brought back to Cup this year as part of Petty GMS Motorsports. Not treated as someone who had a major shot at the playoffs barring a superspeedway win. (Sure enough, that held.)

Or take Regan Smith, who moved back up to Cup in 2016 with Tommy Baldwin Racing after competing for a few Xfinity championships with JR Motorsports from 2013 to 2015. Despite a second-place Xfinity points finish in 2013, Sam Hornish Jr. wasn’t exactly expected to set the world on fire at Petty when he returned to Cup in 2015. There was some hype for Brian Vickers’ 2014 run for Michael Waltrip Racing after his part-time win in the series in 2013 and a strong Xfinity showing for Joe Gibbs Racing, but he didn’t seem like a sure bet per se (and indeed, he finished 22nd in points that year).

Allmendinger? People already seem to be penciling him in as one of the 16 championship competitors next year amid his return to the Cup Series with Kaulig Racing next year announced earlier this week.

And thing is, they’re not wrong. Because it’ll be weirder if Allmendinger doesn’t make the playoffs in 2023.

See also
2-Headed Monster: Who Will Have a Better Year in 2023? AJ Allmendinger or Justin Haley?

Man, imagine if you were coming back to NASCAR right now after, let’s say, a half decade or more away. Allmendinger? The guy who failed to qualify for 19 races in his rookie season in 2007? Got suspended for failing a drug test while running for Team Penske in 2012? Won a Cup race in 2014 but only really seemed able to regularly seal the deal on road courses in Xfinity? Bit of a bust all in all after all that hype coming from open wheel?

Yep, same guy. Oh, and all this is happening just months before his 41st birthday.

The Cup landscape is weird these days, though. 2022 in particular has been a wide-open affair when it comes to clear frontrunners, as evidenced by the glut of different winners. Allmendinger was nearly among them, scoring a runner-up finish at Watkins Glen International during his part-time Kaulig schedule in the No. 16, the car he’ll take over in full next year. He also nabbed his second series win last year at the Indianapolis Motor Speedway road course, a particular triumph not just for part-time drivers but also part-time teams, as Kaulig had not yet moved full time into the series.

Still, one win does not a season make, especially when the era of the road course ringer has long since passed. Even if Allmendinger got a win last year, who’s to say he will in 2023? Especially since he hasn’t yet in 2022 despite actually running more races?

For starters, consider Allmendinger’s stats on the road courses on which he raced in Cup in 2022. He enters the Charlotte Motor Speedway ROVAL this weekend with three straight top 10s on such tracks, going from ninth at Road America to seventh at Indy and the aforementioned second at Watkins Glen. He also led two laps at Circuit of the Americas despite an eventual 33rd-place result, and Sonoma Raceway, where he started 16th and finished 19th, was his only true dud.

To some extent, there’s likely been some pressure on Allmendinger at these races that could be alleviated with a full-time schedule. When he started running part time with Kaulig in 2021, he was only in the car for five races all year, which made it a trophy-hunting endeavor but also one where there was extra emphasis on succeeding in limited chances, because it wasn’t like he’d be back to try again the following week. One could argue the dangling carrot of a playoff berth would replace that pressure, but at least he’s got more opportunities vs. a smaller sample size.

Speaking of more opportunities, the 2023 Cup schedule equals 2022 with six road courses, up significantly from the two per year that typified the circuit throughout much of the series’ lifetime before the ROVAL was added in 2018. Before, road racing aces like Allmendinger and Marcos Ambrose were seen as drivers who weren’t going to have much of a shot at an actual title even if they snuck into the playoffs by virtue of a Sonoma or Watkins Glen victory. Now there are even more chances at not just wins but also playoff point building thanks to the stages that can help someone like Allmendinger get a sizable head start even if his results at mile-and-a-half tracks end up middling.

Not that that may even be a problem. In the Xfinity Series, Allmendinger finally began winning on ovals with Kaulig, something he hasn’t done as much in 2022 but was quite good at in 2021. And as his Cup schedule increased for 2022, his general non-road-course performance has been serviceable, sometimes even good. He boasts two top 10s at ovals this year, a seventh-place finish at Bristol Motor Speedway and a 10th-place run at World Wide Technology Raceway at Gateway.

There’s not yet much to speak of on the cookie cutter front (your Kansas Speedways, Las Vegas Motor Speedways and so on), but with a schedule that includes six road courses and a solid amount of shorter tracks, is that even a concern? It could be icing on the cake more than anything if the No. 16 team excels there.

Allmendinger may also be the ultimate benefactor at the inaugural Chicago street course event next year that replaces Road America. No one really knows what to expect there, so it’s assumed that those with the rawest talent on such tracks will probably be the best off the bat. Allmendinger figures in as one of those drivers, no question. He’s not a shoo-in for a win by any means, but a poor performance would be deeply surprising.

But wait, you say. Even if he makes the playoffs, does that make him an actual title contender? There’s just one road course in the 2023 playoffs, and an ace like Allmendinger still has to get to the Round of 12 to even be eligible to move on.

Well, again, stage points accrued throughout the season could very well help boost Allmendinger’s chances during the Round of 12. Bristol’s part of that round, too, and he’s been stout there in both his Cup and Xfinity competition recently.

Imagine: Allmendinger has a strong year at short tracks in addition to road courses. He gets through the Round of 16. Wins at the Charlotte ROVAL to move into the Round of 8. There’s Martinsville Speedway as the penultimate event of the year. He throws a Hail Mary. Wins.

It’s really not that far-fetched. Allmendinger could very well be a title contender come Phoenix Raceway next year.

Just How High Can AJ Allmendinger Fly In 2023?

Depends on how much Adderall he can get his hands on.

Come on? How could I resist? That title was pretty much a setup for a good joke.

The analogy with other drivers not successfully coming back to cup leave out one important ingredient. AJ has big time talent not to mention a great personality. He’ll do really well imho.