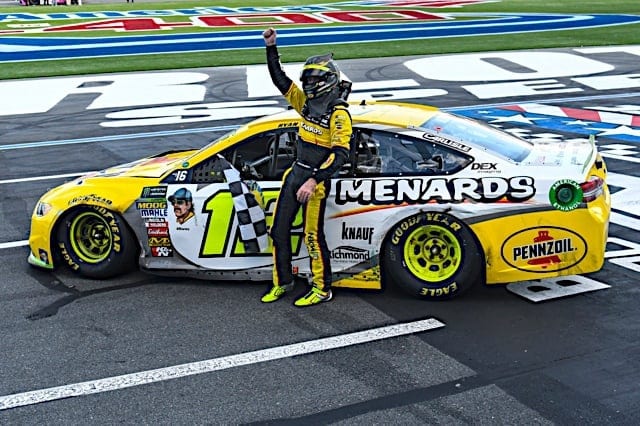 I kind of take back what I said about comparing the NASCAR playoff format to a slasher movie.

It is officially October, and I’d actually apply that comparison more to the Charlotte Motor Speedway ROVAL than anything: sure, at Talladega Superspeedway things happen in a flash and one wrong move can take out half the field, but that’s more Final Destination than anything.

The ROVAL, on the other hand, mirrors Halloween, Scream, Friday the 13th and all your slasher classics, to an even greater degree: the potential for race-ending damage, dashed playoff hopes and general chaos lurks around every single corner of the twisting 2.28-mile circuit.

With all that said, the first and second halves of the ROVAL’s four races to date have been wildly different.

Both iterations of the 2010s races at the ROVAL were held in September; it wasn’t until the turn of the decade that the date slid into October.

The very first race at the layout was an instant classic, with misfortune befalling two drivers on the final lap and dashing one of those drivers’ playoff hopes. Before that, though, came Brad Keselowski‘s infamous controller disconnect moment as he and a number of other drivers piled into the Tums Heartburn Turn on a restart.

Later, Jimmie Johnson had hunted down Martin Truex Jr. in the closing laps, pulling up right to the No. 78’s bumper as the duo entered the frontstretch chicane for the final time.

Johnson locked up the brakes, causing his No. 48 to wobble and spin over the turtles and onto a run-off area, but couldn’t keep his No. 48 Chevrolet from clipping Truex’s No. 78 Toyota. Possibly less than 100 ft. from the checkered flag, Johnson was around and Truex backed into the wall.

Truex couldn’t get the car going in time, allowing Ryan Blaney to slip through and score the second win of his young career.

Outside of the win itself, the incident did little to damage Truex’s hopes for the next round (he made the Championship 4 regardless), but Johnson’s move cost him a playoff spot.

Behind all that, Kyle Larson was limping around in a damaged car and had little hope of salvaging a Round of 12 berth.

Then Jeffrey Earnhardt was spun just before the checkered and the No. 42, beat to hell and wheels askew, trundled by in the nick of time to secure a spot in the next round.

2019 was nearly as chaotic but was best known (and defined by) Chase Elliott losing it on a restart and nosing into the turn 1 wall (the Heartburn Turn strikes again!).

Instead of it ending his day like Keselowski a year prior, Elliott retained enough of his car’s integrity to drive the No. 9 back to the front and claim the trophy.

After all that chaos, the last couple of years have been much tamer.

In 2020, the COVID-19 year, everyone went into the ROVAL expecting pure mayhem: between how insane the year had been on and off the track, plus the day prior featuring an absolute monsoon drenching the NASCAR Xfinity Series race and preventing most from seeing anything on track, it felt like chaos was around the corner.

Instead, just 16 caution laps spanned the race and Elliott won his second in a row after an initial start threatened by rain gave way to a mostly calm race.

As for 2021, Larson avenged his bizarre 2018 race and crumbling car by leading 45 laps, keeping his No. 5 Chevrolet intact and scoring the 13th win of his career and seventh of 2021 en route to his dominant 10-win title campaign.

Behind him came the drama, as Kevin Harvick tried to pay Elliott back for a scuffle they had a few weeks prior at Bristol Motor Speedway.

It worked … until it didn’t.

Later in the race, headed into the first turn, Elliott was behind Harvick. Harvick, perhaps anticipating payback, drifted off and smacked the wall in the corner hard, which ended his day and, presumably, that feud. At least for a while.

Who the hell knows?

With the insane amount of parity this season, 19 different winners and the different ways the Next Gen has performed at road courses, I’ve got no clue.

Maybe the announcement of AJ Allmendinger‘s return to Cup competition with Kaulig Racing will give him and the part-time No. 16 premier series entry a boost this weekend, too. Not like he hasn’t won while only occasionally appearing in that car at a ROVAL before (see 2021).

So far, at least, the weather’s clear for this weekend. We’ve at least got that going for us.

All I know is that when the Roval was announced a few years back I had really low expectations about the racing it would produce. Now it is a race I look forward to as highly as any on the circuit. I think it’s going to be a stellar race!

The Rovals have been arounf too long. Use real road courses instead of another gimmick.

You know what they say about opinions. Here’s mine about the Roval. I think it’s thin soup compared with a real Road Course. It might work for an Xfinity race, but not a Cup playoff race. Plenty of purpose built road courses that would serve better. And they could go to new parts of the country.
When they’re in the Playoffs, in the next to last elimination round, & the story is about driver injuries. Then NASCAR has to know they have BIG problem.