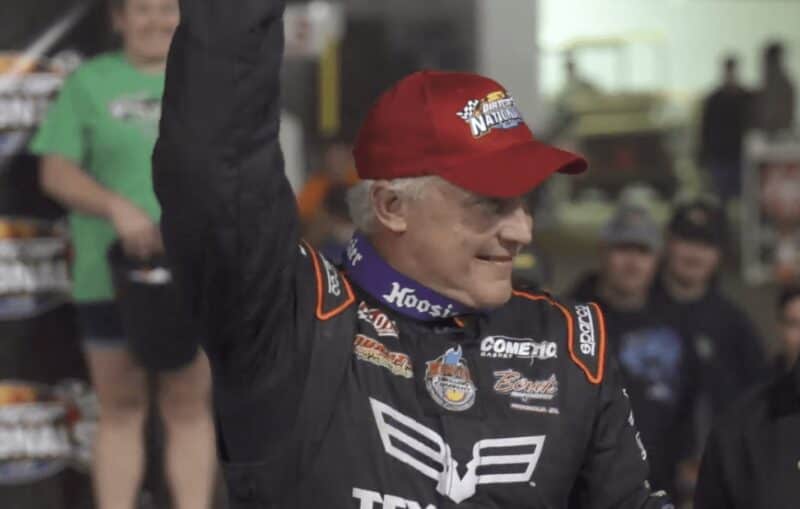 Dale McDowell scored his first Tarheel 50 victory since 2009 on a night that saw the nation’s biggest late model stars fall by the wayside.

A night that was primed for Jonathan Davenport’s 2022 dominance to continue lasted all of three laps in Thursday’s first heat race (Oct. 6), when the nation’s premier late model driver found himself collected in a wreck not of his making.

From there, the regional stars made their presence felt. And while youngster Carson Ferguson led 44 laps and kept Brandon Sheppard at bay, in the end, it was veteran McDowell that grabbed the Tarheel 50 victory, scoring his richest win of the 2022 season and his first in the Tri-County staple event in over a decade.

Ferguson, who weathered challenges from Sheppard and Garrett Alberson during his time up front, saw his lead seriously threatened after a lap 40 caution bunched the field back up and allowed both McDowell and Chris Madden to pounce on runner-up Alberson. From there, McDowell proved untouchable on the bottom, making what would be the race-winning pass exiting turn 4 on lap 45.

The night wasn’t short on hurt feelings, with multiple incidents during the heat races (read on) and Ferguson being unhappy with McDowell after the two did make contact during the race-lead exchange; McDowell in victory lane noted that he held his line down the backstretch and was turned into.

McDowell has to get a shout-out for scoring the Tarheel 50 win. His struggles with cancer and recovery this season have been well documented, but to return to victory lane after a 13-year absence in an event he didn’t get to contest last year was a feel-good story. And this writer concurs with the veteran’s assessment that he played fair with Ferguson on his race-winning move.

🗣️ @DaleMcDowell17m drove through The Tiger Pit – a.k.a. Tri-County Race Track – from 10th to 1st on @Castrol @FloRacing Night in America!

Now, having said that, despite a rocky finish that saw Ferguson bring out the final caution of the night on lap 46 while trying to battle with McDowell for the lead, leading 44 laps and doing well enough in lap traffic to keep Sheppard in check was a strong showing for the local youngster. And let’s not forget the move that Ferguson made to split powerhouse drivers Madden and Mike Marlar to win his heat race earlier in the evening.

It was mentioned multiple times during the broadcast that Cla Knight was begging for next Tuesday off work to race the next FloRacing Night in America event at 411 Motor Speedway. After scoring a top-five finish Thursday, maybe Knight’s case will prevail. Knight also won the night’s hard charger honors for going from 15th to fourth in the Tarheel 50 feature.

There was no shortage of big names to struggle at Tri-County Thursday night. Let’s start with Sheppard, who worked his way up to second but was never able to make enough ground in lapped traffic to seriously challenge Ferguson for the race lead. Sheppard’s shot at victory went out the window with a flat tire on lap 40.

Marlar had arguably his worst night of the season since getting injured at Lucas Oil Speedway, suffering from repeated mechanical issues in the heat race that saw him cut down two tires. Marlar, who was already out of provisionals entering this Flo Racing event, didn’t even start his scheduled B-main.

When was the last time Davenport ended up in this section? A hometown driver who cut his teeth at Tri-County, a night that started with winning quick time in qualifying and a plaque from promoter Ray Cook for his career achievements went out the window on lap 3 of his heat when a spinning Jensen Ford hooked Davenport in turn 3.

Running in the top 10 but never contending for the feature win, Davenport was forced to pit under the lap 46 caution for a flat tire, finishing 15th of the 23 cars that started the Tarheel 50.

Let’s get to some villains. Ricky Thornton Jr. was probably the angriest he’s been since his Gateway Nationals meltdown last winter, taking a swipe at Garrett Smith on the cooldown lap following the fourth heat race. I’ll never advocate using racecars as weapons under yellow, but Thornton at least had a reason to be upset as Smith’s pass for the heat race win was not clean.

And receiving the Tarheel 50 Sam Hafertepe Jr. Award for overreacting to a racing incident is Tyler Millwood, who chucked his helmet at Wil Herrington after the two made contact in their heat race.

Millwood’s car suffered serious enough damage to be upset, but the replay of the incident that got him so upset sure looked like a racing incident (more on that later).

There’s crowded and there’s uncomfortable. I’ve never been to Tri-County before but damn if those stands didn’t look tight. Of course, credit to promoter Cook for jamming the place; FloRacing’s crew remarked that fans had to park at 411 Motor Speedway in Tennessee to make their way to Thursday’s race.

If you’re not here at @tricountytrack, get to @FloRacing because the 23-car grid has rolled to the front straightaway for tonight’s 53-lap, $𝟐𝟐,𝟎𝟐𝟐 #TarHeel50.

Who are you riding with tonight? 🤙 pic.twitter.com/u1qagPTJ3i

Nothing says you’re at a dirt track south of the Mason Dixon line than a midweek program having four support classes running. Fortunately for all involved, none of the four classes had enough cars to demand a copious amount of prelim races. And I’ll admit that seeing a pack of seven front-wheel drive cars pack drafting in group qualifying was a sight to behold.

Having said that, credit where it’s due. Despite all the support classes, the headline feature of the night was over before 10 p.m. Well done for a weeknight program.

Please. Stop. Muting. On-track racing. To cut to the FloRacing studio. There is so much freaking downtime during even an efficiently run dirt program for talking heads to earn their paychecks. Really disappointing to listen to DirtonDirt personalities yak when crate late models were feature racing.

Watching Tyler Millwood do his best Tony Stewart when he threw his helmet at Herrington following their heat-race incident may have been entertaining to some, but I can only shake my head at a racer at this level having no qualms chucking equipment worth big dollars over a racing incident.

Doesn't he know you walk to the fence pick up some mud/rocks/etc and throw that. Helmets are too expensive to be throwing.

Much was made of Scott Bloomquist’s late model being towed to the racetrack courtesy of a truck and box trailer after Team Zero experienced hauler trouble. Meh. Call me when a major super late model is riding on an open trailer.

For all the effort and money FloRacing spends on utilizing a studio pre-race and commentary throughout its Night in America racing program, it’d be nice to see a split-screen get used to show the actual feature early and often. Yes, Ferguson and Alberson were running close for the race lead in the feature’s opening laps, but going nearly 20 laps without seeing anything going on in the pack was disappointing. Fortunately, the dual screens made an appearance in the race’s second half.

53 – laps that made up the Tarheel 50 feature (per FloRacing, the extra laps are there because the promoter got tired of hearing racers saying “They needed a few more laps”).

Where it Rated (on a scale of one to six cans with one a stinker and a six-pack an instant classic): We’ll give the Tarheel 50 four and a half pulls of whatever the black moonshine being continually referred to was. Tri-County certainly mixed up the finishing order among national super late model contenders and finished a decent race at a memorable hour.

Getting to see some more racing in the pack probably would have helped this score, as this writer couldn’t travel to the middle-of-nowhere North Carolina on a work night.

Up Next: Thinkin’ Dirty heads north to the Oswego Speedway for the 200-lap conclusion of Super DIRT Week Sunday in New York. Coverage of the $50,000-to-win modified feature can be found Sunday on DirtVision.