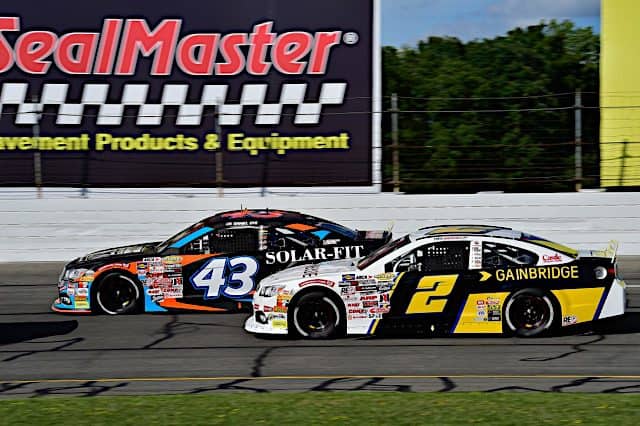 Nick Sanchez leads Daniel Dye by two points with only one race left in the ARCA Menards Series season. Who will win the championship at Toledo Speedway?

Mark Kristl: While Daniel Dye has run better than Nick Sanchez on short tracks, Sanchez has run well at Toledo and he must finish within two spots of Dye to claim the title. While Dye will finish ahead of Sanchez at the end, Sanchez will finish two positions behind Dye. As a result, the season will end in a tie in the standings, with Sanchez claiming the title via the tiebreaker of wins (Sanchez has three and Dye has zero).

Luken Glover: It is going to be a chess match between the two for the title. Dye has five consecutive top-five finishes, while Sanchez has finished outside the top five in the last two races. However, Sanchez has proven to be able to close races with three wins this season. Dye has a goose egg in that column. When all is said and done, I’m going with Sanchez to pull off a nailbiter.

Mike Neff: Toledo is a physical track that can lead to a lot of tight racing and paint trading. Don’t forget the incredible turn of events years ago that led to Justin Allgaier winning the ARCA title over Scott Speed and Ricky Stenhouse Jr. Dye has been none too shy about getting physical. That will probably serve him well to win the title.

Anthony Damcott: Sanchez has let the past few races get away from him with poor finishes (some out of his control), so he needs to be able to shake that off and finish the deal. However, Dye only needs to finish two spots ahead of Sanchez to draw even, and with a championship on the line, Dye will not be afraid to use the bumper to get Sanchez out of the way or move his competitors to gain a spot on Sanchez. It would be interesting to see Dye win his first race of the year to secure the championship. I’m going with Dye winning it all.

Silly season has begun to wrap up in both the NASCAR Cup and Xfinity series. Who’s the best driver currently without a ride right now for 2023 who should have one?

Glover: There aren’t too many big names or exciting prospects out there, but a few still remain. The one I’m looking at closely is Carson Hocevar. Rumors have circulated about him going to Cup, Xfinity or staying in the NASCAR Camping World Truck Series. No, he hasn’t won yet, but he has made that Niece Motorsports truck a contender for the first time since Ross Chastain in 2019. Whether Hocevar stays with Niece or explores opportunities elsewhere, he will be someone to watch for years to come. The other one is Daniel Hemric. Kaulig Racing wants him to return but needs to find funding. No matter the questions about how he got it, no champion should go without a ride. He will likely return to Kaulig, but funding can quickly change things. Just look at Kyle Busch.

Damcott: The fact that Ryan Preece hasn’t yet landed a full-time ride, even if it were in the Truck Series, is surprising. His finishes in Trucks should have earned him a full-time ride with someone by now, but it surprisingly hasn’t happened. Being a reserve driver for Stewart-Haas Racing, there needs to be a Ford seat to open up for him, but it’s clear he can run up front and produce great finishes (even wins). So if I’m SHR, I’m negotiating with lower series teams to field a car for him.

Kristl: With David Gilliland Racing reportedly moving to Toyota in 2023, that leaves Preece in limbo. Preece deserves either a full-time Xfinity or Truck ride. Running a part-time Truck slate, Preece is 19th in the championship standings, ahead of five full-time competitors. Preece won’t attain a Cup ride, but he would be an upgrade for several Xfinity teams and he would become an instant championship contender in solid Truck equipment.

Only four Cup drivers did not finish the Talladega Superspeedway race. Was that a byproduct of drivers being more conscious about safety, learning these Next Gen cars or something else?

Neff: There is no question that safety was at the forefront of the discussion leading up to Talladega. That said, racers are racers, and they know that there is danger involved any time they get behind the wheel. This weekend seemed to be more about the fact that a third line could never develop any momentum and that hampered the ability to try and make moves. In the end, that resulted in fewer questionable moves and only one Big One.

Kristl: It’s a combination of both. Both Alex Bowman and Kurt Busch‘s injuries cost them shots at championships, something every Cup driver desires. Talladega is known for its high speeds, so I’m sure the expected chaos led many of the drivers to not attempt a crazy block. At the same time, 31 of the 36 Cup races have been completed in 2022, so these drivers have logged enough laps on all tracks to understand the handling of the Next Gen cars. Their knowledge and cautiousness actually led to an exciting green-flag finish.

Damcott: Safety was definitely a factor, but drivers definitely became more conscious of pushing and taking pushes. It seemed that more drivers fell out of line than normal, waiting for the big one to happen. But that wreck never came. However, those cars dropped to the back and created a more spread-out field; being less bunched arguably prevented the big one from happening.

Glover: It was a mix of things. As mentioned, safety played a role in it. With drivers voicing their frustrations with safety, combined with what happened to Jordan Anderson in the Truck race, that was probably in drivers’ minds during the race. We also saw more attention to not pushing cars where they can’t take a push for the most part. The biggest thing, however, was just how the race played out. Several drivers stayed back or dropped out of line when things got intense. We also didn’t see much three- or four-wide racing, with two lines closer together dominating the race. This race could have produced multiple Big Ones, but drivers were more attentive to taking pushes, it seemed.

See also
Up to Speed: Strategic Restraint Rules at Talladega

Which four drivers will be eliminated from the Cup Series Round of 12?

Damcott: Well, excluding Bowman, it appears Christopher Bell is in a must-win situation, which is a surprise considering his incredible consistency in the first round. Along with Bell, it’s kind of a crapshoot on who misses. Statistically, Daniel Suarez has the worst average finish of the current playoff drivers at the Charlotte Motor Speedway ROVAL (24th). However, his lone win this season came on a road course, so he could actually be a factor this weekend. His teammate Ross Chastain isn’t much better (22.5), but he, too, has won on a road course this season. My three of choice are Bell, Chase Briscoe and Austin Cindric.

Glover: Two drivers are practically in must-win situations: Bell and Bowman. While both have shown that they are capable of competing for road course wins, I don’t see it happening. In Bell’s case, Toyota has struggled on road courses while Bowman isn’t competing due to injury. The last two are a toss-up. All four drivers hanging around the bubble have either been great at the ROVAL or strong on other road courses, plus Denny Hamlin‘s 21-point deficit isn’t too comfortable with his road course performance in 2022. Briscoe and Suarez will see their title hopes dashed.

Neff: Looking at the standings and knowing the ROVAL is the eliminator, this looks like it is going to be a bad day to have a last name beginning with the letter B. Bowman, Bell and Byron look to be the most likely drivers to not advance. Cindric and Briscoe are good road course racers so they ought to be able to make it through. That puts pressure on Suarez. He is 34 points ahead of Cindric and Briscoe so a consistent run should get him into the Round of 8. If that means one of the two at the line won’t make it. I’m going with Briscoe.

Kristl: In addition to Bowman, who isn’t competing, Bell, Suarez and Cindric will be eliminated. All three each have one win, and although Suarez and Cindric are talented road course wheelmen, the Hendrick Motorsports knack for success at the ROVAL will oust those four from the playoffs.