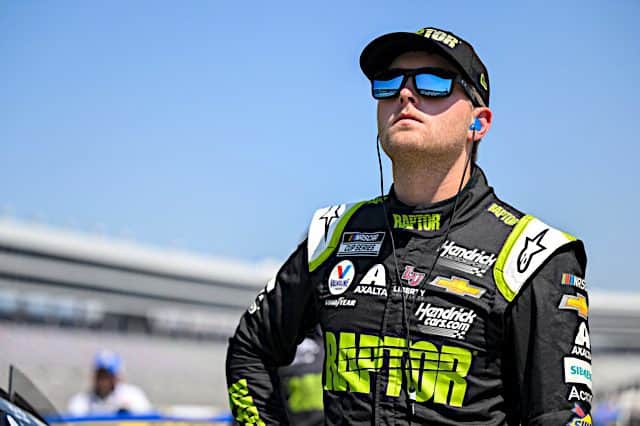 Byron was originally fined $50,000 and docked 25 driver and owner points for aggressive driving at Texas, after he retaliated on Denny Hamlin for an earlier incident by spinning him out under caution.

Following Byron’s appeal, the members of the Appeals board for the hearing — Hunter Nickell, Dale Pinilis, and Kevin Whitaker — determined that he will not lose the 25 driver and owner points, but the fine has increased to $100,000 for the altercation.

The reinstatement of his points vaults him from 10th in the playoff standings, 11 below the cut line, to seventh, 14 points to the good. This now puts Daniel Suarez on the bubble, 12 points above both Austin Cindric and Chase Briscoe, who were previously tied at the cut line.

Who pays the fine?

LOL… What a crock.
He would have lost about the same amount of points had NASCAR did what they should have done when it happened,,,, put him the last car on the lead lap. The penalty was fair in my opinion.

I like Byron, but have to agree with you, what a crock. Many in the garage won’t like this at all. Now I want him to win it all but no way nascar let’s that happen. Speeding on pit road is the easiest way for nascar.

I’m still hoping Blaney can win it all without winning a race. If there is any year where the champion might not win the final race, this is it.

That would be great too

SHR/Harvick penalty paid for his fine !

He’s not driving a FORD.

Of course he got his points back. Big Daddy Hendrick snapped his fingers and NASCAR jumped. Every other playoff driver/team but Hendrick’s teams got screwed; can’t have anything happening to the Chosen Ones.