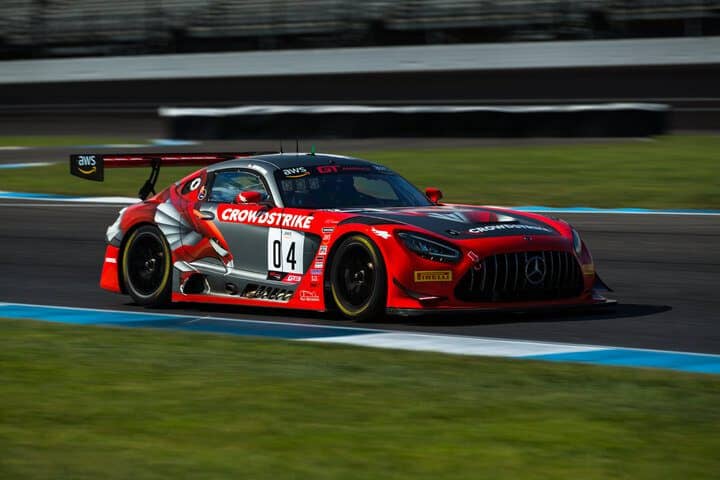 Crowdstrike Racing with Riley Motorsports’ George Kurtz was sent to the rear of the SRO3 class after failing post-qualifying inspection Friday (Oct. 7). No worries as he drove through the GT3 traffic and took the lead from Jeff Burton with just over 12 minutes to go, then proceeded to drive away to take his eighth GT America win of the year.

“It’s a little easier to start at the front, but I had a lot of fun and the pressure wasn’t on after winning the championship,” Kurtz said afterwards to SRO America’s Amanda Busick. “I just wanted to have fun, clear the traffic. Those are good times that you’ll remember.”

Kurtz had originally qualified on the overall pole, but Burton inherited the position when Kurtz was penalized.  Burton was able to open a short lead, but it didn’t last long.  GMG Racing’s Kyle Washington went wide in turn 1 and got in the grass.  He then rejoined and all but stopped in the groove before resuming with smoke coming out of his Porsche. It seemed quite minor, but the officials threw a full course caution for it.  Washington ended up in the pits for quite a while before rejoining. He ended up finishing 10 laps down. As the leaders finished 27 laps in the 40-minute race, that was not enough to be classified as an official finisher.

Washington’s trouble elevated Jason Daskalos to second with Zelus Motorsports’ Jason Harward giving chase.  While Daskalos was in his usual Audi R8 LMS Ultra, Harward was as well since the team is entered in the Indianapolis 8 Hour with their sole remaining Lamborghini. For Harward, the race was short-lived as his car pulled up lame exiting the infield early and was forced to retire.

Burton was able to run off and hide while Daskalos had to deal with both Kurtz and Mirco Schultis. Schultis was eventually able to get second from Daskalos, but it was short-lived as Kurtz charged by both drivers to take second. By that point, Burton had an 11-second lead.

Turning in laps more than a second quicker than Burton, it did not take Kurtz long to run down the Lamborghini at the front of the field. The move was made in turn 12. Burton could nothing to prevent the pass. From there, it was all over as Kurtz ran off and hid en route to victory.

The final margin of victory was 16.248 seconds over Burton. Schultis was third. Daskalos was fourth in class, but pulled out early with a mechanical issue.

In GT4, Chouest-Povoledo Racing’s Ross Chouest started on pole in his Aston Martin and led early. Meanwhile, Flying Lizard Motorsport’s Elias Sabo was having braking issues. He ended up having to bail inside of the curb in turn 1 on the first lap. After the restart from Washington’s issues, things got far worse.

Sabo got defensive on the frontstretch in an attempt to block a passing attempt from Hattori Motorsports’ Seth Lucas. Sabo’s Aston Martin then refused to slow down quick enough. As a result, Sabo plowed into the right side of Premier Racing’s Adam Adelson, who was running second at the time. Both cars were out on the spot from the crash, but were able to limp into a safe position and prevented a full course yellow.

The crash had major championship implications in the GT4 class as Adelson entered the race second in GT4 points, just two behind GMG Racing’s Jason Bell. Adelson is now 17 points back in third with one race to go.

With Adelson and Sabo eliminated, Lucas moved up to second and spent much of the race fighting with Chouest for the class lead.  Lucas’ best chance to get past came with 14 minutes to go when he got alongside on the frontstretch. Unfortunately, Burton was coming through at the time as well to lap them both.

Lucas continued to try hard to get past Chouest for his third win of the year, but Chouest was able to hold on for his first win of the year. He is the 10th GT4 driver to score a class win in GT America this year.

Chouest ended up fifth overall in his Aston Martin, 1.259 seconds ahead of Lucas. Bell was third, then The Heart of Racing’s Gray Newell and Conquest Racing’s Custodio Toledo rounded out the top five.

GT America teams get Saturday off, but will be back in action bright and early Sunday morning at 9 a.m. ET. While the SRO3 title is already settled, the GT4 title is still up for grabs. Bell has an eight-point lead over Chouest.  That race will be streamed live on the GT World YouTube channel.