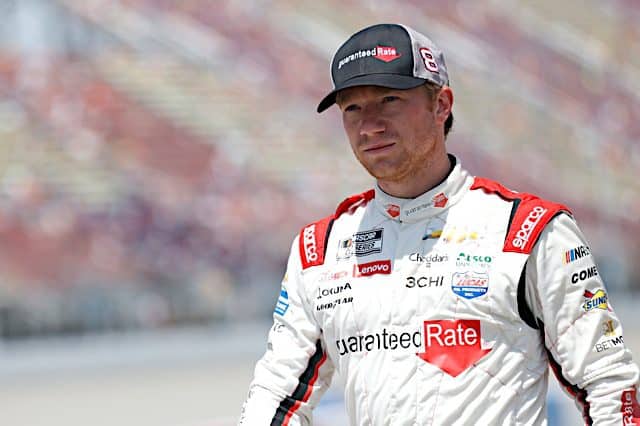 The NASCAR Cup Series’ Round of 12 of the playoffs comes to a close this weekend at the Charlotte Motor Speedway ROVAL. Let’s take a look at some drivers you should consider for your daily fantasy NASCAR DraftKings lineups for the Bank of America ROVAL 400, airing Sunday, Oct. 9 at 2 p.m. ET on NBC.

Since it’s the end of the Round of 12, playoff drivers will likely focus on gaining as many points as they can, so you’ll see a variety of drivers out front as they go on different pit strategies. Fortunately, there’s only 109 laps in this race, so the most DraftKings points a driver can get for fastest laps and laps led is 76.3 (49.05 points for fastest laps and 27.25 for laps led). I highly doubt one driver will lead every single lap, considering the way this year has gone, but it has happened before at Watkins Glen International.

Even though 12 drivers will be vying for points throughout the race, there’s still several others who can contend for the victory. We’ve already seen 19 different winners this year, and the 20th could break through at the Charlotte ROVAL.

So, how do you prepare your DraftKings rosters for this event?

You’ll want to start with the five road courses run this year. Those five were with the Next Gen car, so I place more emphasis on this season than previous years (since the cars are so different). Also, general road course stats can show you which drivers have a knack for this track type. Chase Elliott, for example, has one of the best records on road courses, with seven wins in 24 races. (Coincidentally, he hasn’t won a road course yet this season).

One bit of research you may not have thought of is the loop data from this year’s race at the Charlotte oval, the Coca-Cola 600. Though it was long and filled with crashes, certain drivers stood out, especially in their average positions and their green flag speed.

Before I get into my picks for this week, take a look back at the results from Talladega Superspeedway:

Well, it seems like I’m picking the winner each time; this week it was Chase Elliott. Unfortunately, several drivers didn’t do as well as I’d hoped, especially Martin Truex Jr. and Kevin Harvick. The latter sped on his last trip down pit road and ruined his chances of a good finish. Truex, meanwhile, just never made much headway and wasn’t at the front at the end.

Even though the race ended calm and without any big crashes, some who are typically good on this track type finished near the front, like Ryan Blaney and Michael McDowell.

Blaney, McDowell and Elliott all were in the top scoring lineup in the $15,000 Happy Hour tournament, as were Bubba Wallace, Landon Cassill and Todd Gilliland. Together they totaled 368.5 fantasy points on DraftKings.

Now, onto my DraftKings picks.

Elliott will certainly do well at the ROVAL, so I decided to talk about a driver who earned his first two Cup wins on road courses. Tyler Reddick finally broke through to victory at Road America, leading 16 laps after a tight battle with Elliott. Then at Indy, he had one of the fastest cars of the day, staying out front for 38 circuits on the way to the checkered flag.

Later at Watkins Glen, Reddick placed seventh, scoring his fourth top 10 out of the five road courses run this year.

Also, last season the No. 8 Richard Childress Racing Chevrolet drove from 29th to second place at the Charlotte ROVAL.

Even though Reddick is out of the playoffs now, he still wants to earn wins like he did at Texas Motor Speedway two weeks ago. He can fit in your lineup with Elliott, but you’ll likely need some lower-priced drivers under $6,000 as well.

Joey Logano is one of three active drivers who has earned a top 10 in all four races on the ROVAL. Last year he was seventh, while in 2020 he finished runner up.

The No. 22 Team Penske pilot has also earned some good results on the road courses this year, finishing sixth and third at Indy and WGI, respectively. He even led 15 circuits at the Glen.

Although the Cup Series hasn’t run on the Daytona road course this year, it’s similar to the Charlotte ROVAL since it has banking in the turns. Logano showed he can finish well there, too, earning a ninth and second in 2020 and ‘21, respectively.

Ross Chastain is pretty much the opposite of Logano at the 2.28-mile ROVAL. In last year’s event with Chip Ganassi Racing, Chastain ended up 23rd.

However, he’s still one that I’m considering for DraftKings this weekend. For starters, he won at the Circuit of the Americas — his first-ever Cup victory. Also, Chastain brought home a seventh place at Sonoma Raceway and a fourth at Road America.

But one of the more notable stats I noticed was his speed in the Coca-Cola 600. He had the eighth-fastest green flag speed and had an average position of 4.4. Though Chastain finished 15th there, he was running at the front for much of the night, leading 153 laps on the Charlotte oval.

Will it still translate into this weekend’s day race? If you think Chastain will do well, place him in your daily fantasy NASCAR DraftKings lineup.

Chris Buescher has generally been known to over achieve and finish better than where he began. Well, he’s certainly done that this season, as he’s earned five top fives in the last six road course races.

Buescher led four laps at Sonoma before coming home runner up to Daniel Suarez. Also, he was sixth at Road America and ninth at Watkins Glen. Plus, in the Indy road course event, Buescher bounced back from a fire to place 10th.

Additionally, Buescher’s last time out at the ROVAL was pretty good too: he earned a third-place finish after starting 16th. He should earn you position-differential points on DraftKings this Sunday.

Michael McDowell is similar to Buescher in that he’s performed well at this track type. He’s finished 16th or better in each of the last six road courses, including four top 10s. He was third at Sonoma, eighth at Road America and Indy, and sixth at WGI. Plus, he led 14 laps at the Glen, though that was mostly when it was raining.

Though he hasn’t done as well at the ROVAL, McDowell gained 10 positions to finish 12th in 2019. He also earned a 16th in last year’s race.

While he’s not as inexpensive on DraftKings as some other lesser-funded drivers, McDowell should still meet his value if he can earn another top 10 or top 15, as long as he doesn’t start near the front.

This year McDowell’s rookie Front Row Motorsports teammate has had an interesting season, especially on the road courses. Todd Gilliland earned a 16th at COTA, which is pretty good for his first time out.

But even more successful was his effort at the Indy road course: Gilliland led four laps en route to fourth place. And though his result at the Glen wasn’t desirable, he still held his own at the beginning, leading five circuits.

In the NASCAR Camping World Truck Series, Gilliland earned a pair of fourth places at Watkins Glen and the Daytona road course, so he knows how to get around this track type.