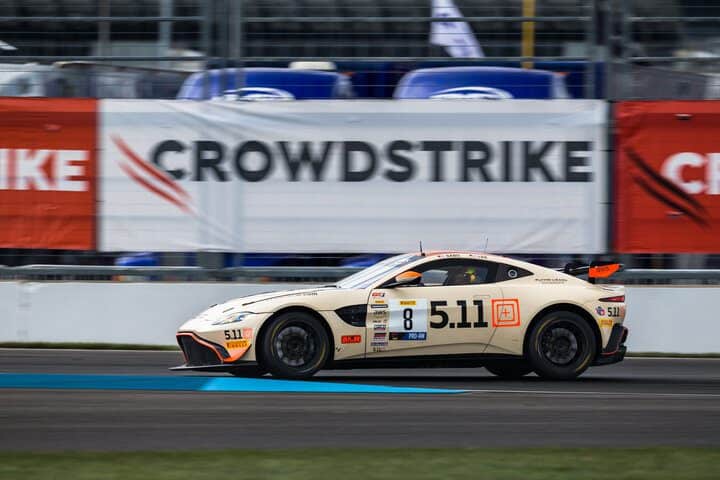 At a chilly Indianapolis Motor Speedway Saturday morning (Oct. 8), Flying Lizard Motorsports’ Andy Lee was able to sweep around the outside of both Rennsport One’s Eric Filguerias and Conquest Racing’s Gavin Sanders on a late restart to take the lead entering turn 1 from third.

He then held on to win Pirelli GT4 America SprintX Race No. 1. It is Lee and teammate Elias Sabo‘s first overall win of the year.

Lee also stopped to celebrate on his cool-down lap, throwing his racing gloves to some fans.

“I hadn’t won a race since 2015,” Lee told SRO America’s Amanda Busick. “It’d been so long that I had to celebrate. My co-driver Elias has been working so hard for so long and I’m just so proud to be standing up here with him.”

Rennsport One’s Stevan McAleer won the pole for Race No. 1 in his Porsche, despite the team claiming it was down on speed. He was able to keep himself ahead of Conquest Racing’s Michai Stephens. The two drivers proceeded to drive away from the field.

Meanwhile, Fast Track Racing’ Tim Horrell spun in turn 10 on the first lap in his BMW after contact from AutoTechnic Racing’s Austen Smith. He was able to continue without incident, but Smith was given a drive-through penalty for avoidable contact.

Right as Smith was serving his penalty, the first full-course caution came out when Horrell slid off course and hit the tires in turn 9. That contact ended a very short and expensive race for Horrell.

The race restarted after a long yellow to fix the tire barrier with less than three minutes until the mid-race pit window opened. Stephens viewed this situation as his chance to get past McAleer and tried to make a run on him heading into the chicane. McAleer was able to hold him off. McAleer then opened up a small gap as the window opened.

In the Pro-Am class, most of the contenders all pitted at the first possible opportunity. Chouest-Povoledo Racing’s Aaron Povoledo won the race off of pit road, but got busted for speeding. That gave the Pro-Am lead to The Heart of Racing’s Ian James.

See also
George Kurtz Comes From Back Of SRO3 To Win Indianapolis GT America Race No. 1

The man on the move in Pro-Am was Lee in the No. 8 Aston Martin. He was able to dispatch of James fairly quickly after the stops to take over the Pro-Am lead, then pulled away from his fellow Aston Martin racer.

McAleer and Stephens pitted two laps later in their Silver class entries. Conquest’s Gavin Sanders was able to beat Filguerias off the pit lane to take the class lead. Filguerias was able to get him back half a lap later. That became the overall lead once again once the pit stop sequence finished.

The second full course caution came out when KRUGSPEED’s Jaden Lander suffered an apparent mechanical failure that pitched his Toyota GR Supra GT4 into the gravel in turn 4. He was done for the day.

The green came back out with under nine minutes to go. A big scramble broke out as everyone tried to get everything they could. Filguerias got defensive on the restart in an attempt to hold off Sanders. Meanwhile, Lee went extremely deep into turn 1 and sneak attacked both drivers to take the lead. From there, Lee was able to hold on to take the overall win.

In Pro-Am, Lee and Sabo’s victory margin was 2.496 seconds over Adelson and Skeer. James and Newell were third, then Hart and Noble. GMG Racing’s Jay Logan and Alexandre Premat were fifth.

In Silver, McAleer and Filguerias took the class victory in second overall. They also clinched the Silver-class championship by reaching the 70% mark of the race, making themselves eligible for points. Their margin of victory was 2.578 seconds over Sanders and Stephens, who dropped back from second to sixth overall in the closing laps. Despite an early drive-through penalty, AutoTechnic Racing’s Smith and Zac Anderson recovered to finish third.

SMOOGE Racing’s Kevin Conway and John Geesbreght were fourth on the road, but were given a post-race 57-second penalty (the time equivalent of a drive-through penalty under green) after Geesbreght spun out Aaron Telitz on the final lap. That moved the Supra of Dexter Racing’s Ryan Dexter and Dominic Starkweather up to fourth, while Forbush Performance’s Caleb Bacon and Matt Forbush were fifth.

In the Am class, Conquest Racing’s Custodio Toledo qualified a career-best fifth overall in his Mercedes and kept himself up front for his entire stint. Teammate Paulo Carcasci was able to keep himself at the point as well, but the last couple of laps were a big scramble. Carcasci got held up on the final lap, which allowed Carrus Callus Raceteam’s Terry Borcheller to sweep past exiting turn 10 on the final lap to take the class victory for himself and Nick Shanny.

Borcheller and Shanny ended up 10th overall, .613 seconds ahead of Carcasci and Toledo. Am champions James Clay and Charlie Postins of BimmerWorld Racing were third, then Rennsport One’s Nelson Calle and Juan Martinez. The Racers Group’s Jason Alexandridis and Derek DeBoer were fifth.

The 2022 Pirelli GT4 America SprintX season wraps up Sunday morning with Race No. 2 at Indianapolis. It is scheduled to start at 11 a.m. ET and will be streamed on the GT World YouTube channel.