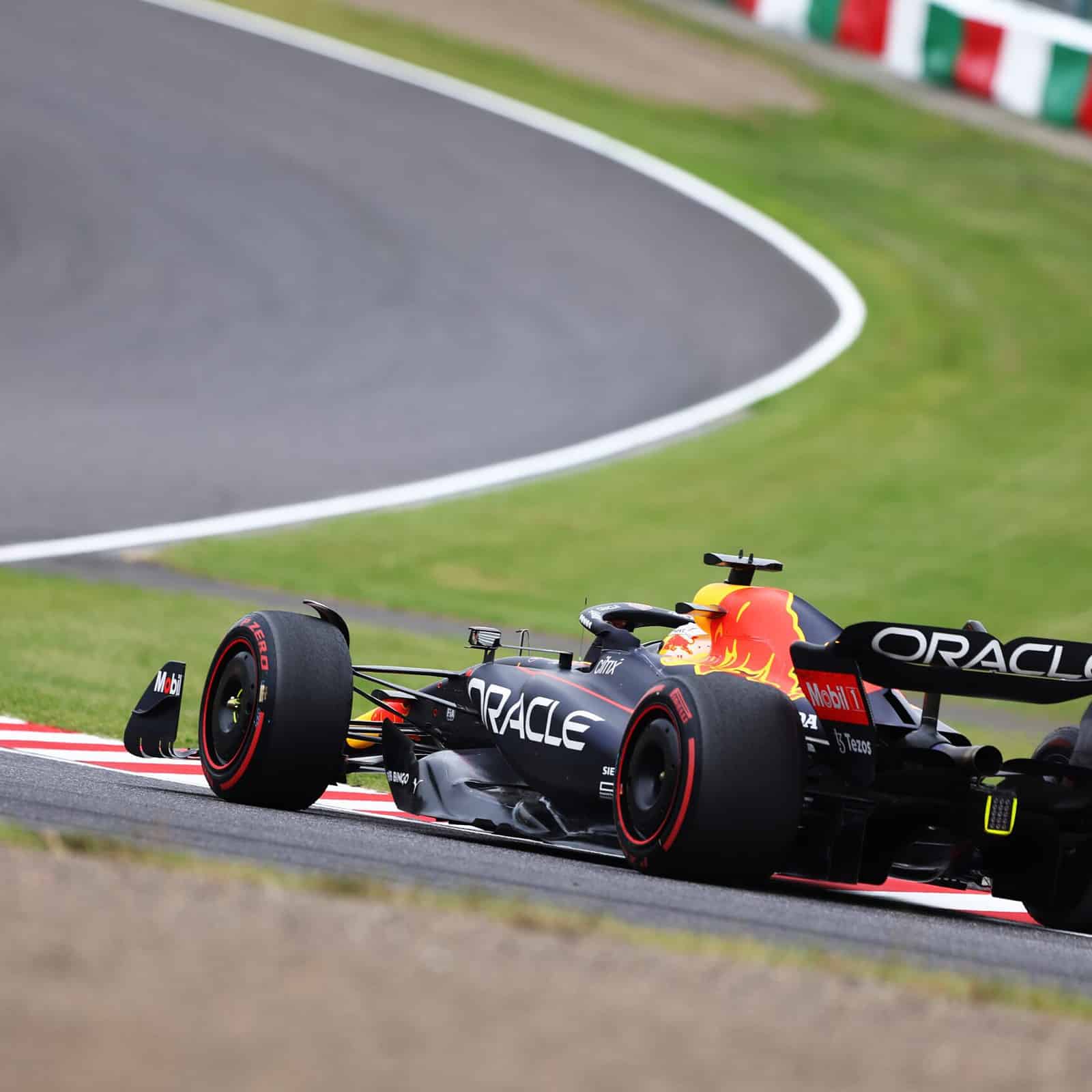 Max Verstappen will start the first Japanese Grand Prix since 2019 from pole position after besting Charles Leclerc in Saturday’s (Oct. 8) qualifying session at the Suzuka Circuit.

From pole position, the 18th of his career, Verstappen has a chance to wrap up his second consecutive Formula 1 championship should the results fall his way on Sunday (Oct. 9).

“Very happy to be on pole but in general just super happy to be back here … I am quite confident we have a good car, so yeah, excited for tomorrow.”

Full results from Saturday’s qualifying sessions can be found here.

The only drop of rain on Verstappen’s parade is an investigation to be conducted after qualifying to determine whether Verstappen impeded Lando Norris after catching a snap of oversteer in front of the McLaren driver, causing the Briton to run off track. Norris later told Motorsport he expects Verstappen to be penalized as a result of the incident.

Lando Norris just avoids Max Verstappen, who gets a huge kick of oversteer coming into the final chicane

No contact is made and they both continue#JapaneseGP #F1 pic.twitter.com/L0sztfX65N

Verstappen paced Leclerc and Carlos Sainz home in Q3 with Sergio Perez trailing in fourth to complete the now normal sweep of the top two rows of the grid by Red Bull and Ferrari.

Capping off three (major) incident free sessions of qualifying, Sebastian Vettel advanced to Q3 after a string of poor qualifying performances in recent months, doing so at a track of which the German is extremely fond. Vettel will start his last Japanese Grand Prix before retirement from ninth on the grid.

Handling issues that had plagued Yuki Tsunoda and Pierre Gasly throughout Q1 continued to heckle the Japanese driver into the second session of the day. “Brakes are so bad,” Tsunoda reminded his team barely five minutes into Q2.

The action continued to follow the hometown hero throughout Q2 as his final flying run was nearly derailed entirely before it even began. While making his way out of the pit lane for his final run, Tsunoda was nearly clipped by the Haas of Mick Schumacher as the German overtook the AlphaTauri at pit exit.

Moments later Schumacher was nearly rear ended by Tsunoda as the pair approached the famous 130-R corner. With Tsunoda fast approaching and the German weaving to warm his tires, Schumacher failed to yield to one side of the track or another, forcing Tsunoda to hit the brakes and bail out of his run into the corner.

Tsunoda was eventually eliminated from Q2 in 13th place, with Schumacher likewise eliminated in 15th.

A quiet Q3 opened with the AlphaTauri duo of Gasly and Tsunoda taking to the track well before the rest of the field, grabbing two flying laps with the track effectively to themselves. Almost immediately, however, the car proved temperamental under braking, complicating the session for both drivers. Gasly was later eliminated from Q1 and will start Sunday’s race from 17th on the grid.

GAS 📻: "Problem with the brakes… what is going on?"

Both AlphaTauri drivers are struggling with brakes, but they're both inside the top 15 as things stand#JapaneseGP #F1 pic.twitter.com/dVyoT3FHCj

Mercedes drivers George Russell and Lewis Hamilton nearly found themselves shockingly eliminated from Q1 after taking on a conservative tire strategy. Both drivers opted to go out on mediums, saving a set of fresh soft tires for the closing moments of the session.

With the mediums proving to be slower than necessary to advance out of Q3, both of the silver arrows made a last minute run on softs and managed to advance in seventh and 11th place, respectively.

Eliminated from Q1 were:

Following a pair of lineup announcements on Friday, only two seats — one at Haas and one at Williams — need filling before the 2023 F1 grid can be considered complete.

After six seasons and three podiums, including one win, Gasly has been announced to be moving to Alpine to partner with Esteban Ocon from 2023 and beyond. Gasly’s move to the team completes an all-French driver lineup for the Renault-powered squad after Fernando Alonso‘s confirmed moved to Aston Martin next season.

Filling Gasly’s seat at AlphaTauri, also confirmed on Friday, will be Nyck De Vries. De Vries previously made his grand prix debut at Monza, filling in for a medically sidelined Albon. The Dutchman collected two points on debut by finishing the Italian Grand Prix in ninth place. De Vries previously won the 2019 Formula 2 title as well as winning the championship in the 2020-21 Formula E season.