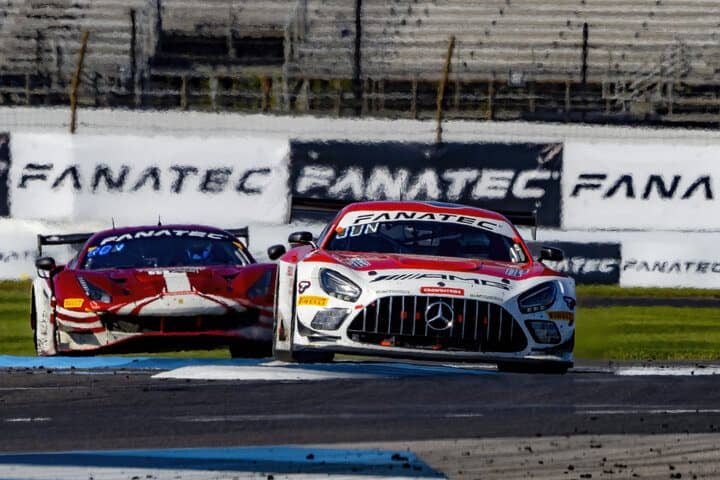 Craft Bamboo Racing’s Raffaele Marciello was able to hold off a late charge from AF Corse’s Antonio Fuoco on the final lap Saturday (Oct. 8) to win the Intercontinental GT Challenge Indianapolis 8 Hour at the Indianapolis Motor Speedway for himself and teammates Daniel Juncadella and Daniel Morad. The race also doubled as the season finale for Fanatec GT World Challenge America Powered by AWS.

“We knew our car really strong. Daniel [Morad] did an amazing job at the beginning and also Dani [Juncadella]. They put the car in front, so I did almost nothing,” Marciello told SRO America’s Amanda Busick after the race. “I had to fight with Antonio [Fuoco], but I’ve known him a long time and it was a nice battle. I’m really happy.”

Winward Racing’s Russell Ward started from pole after teammate Jules Gounon set a track record in qualifying Friday. It did not take long for him to fall into the clutches of Conquest Racing’s Alessandro Balzan. The veteran racer stalked Ward until he made his move 16 minutes in to take the lead.

The field was jumbled due to a red flag in qualifying that resulted in a number of strong teams not making the Pole Shootout. Craft Bamboo’s Mercedes started 15th with Morad driving. AF Corse’s Daniel Serra started 18th. When the green flag dropped, both Serra and Morad were on the move.  In just 15 minutes, Serra drove all the way up to fifth overall. Morad was not far behind.

K-PAX Racing’s No. 1 Lamborghini with Marco Mapelli at the wheel was strong early on. Mapelli was able to run down Balzan and take the lead away late in the first hour. Once in the lead, Mapelli pulled away. Meanwhile, Serra was able to get to second overall before the first stops.

As the race wound on, it became an AF Corse versus Craft Bamboo Racing duel as the rest of the field dropped away. Fanatec GT World Challenge America Powered by AWS Pro champion Andrea Caldarelli suffered a left rear tire failure right at the halfway point. He pitted for tires and to put Mapelli back in the car.

Unfortunately, the issues were not fixed. Mapelli’s Lamborghini was intermittently smoking afterwards. That ultimately resulted in another tire failure exiting turn 14 just after halfway. The failure pitched him into the SAFER Barrier, then back across the track and into the inside wall on the frontstretch. That put Mapelli out on the spot and brought out the race’s first safety car period. Mapelli was very upset about the crash, blaming Pirelli and telling Busick that the tires were unsafe.

AF Corse’s No. 71 dominated the race early on, leading by as much as 29 seconds. However, a drive-through penalty put the Craft Bamboo Mercedes up front.

In the last 90 minutes, Fuoco was able to run Marciello down from 10 seconds back as Marciello dealt with lapped traffic. The two drivers dueled hard. When Marciello put SunEnergy1 Racing’s Dominik Baumann between himself and Fuoco, it seemed like it was over. On the final lap, Fuoco got to Marciello’s bumper and got a run on him exiting turn 10.

Marciello went defensive on Fuoco, taking away the inside line. Undeterred, Fuoco tried to take the outside line in turn 12. Marciello more or less took away his line and forced him to drop a wheel. That was all Marciello needed to take the win.

The margin of victory was eight-tenths of a second over Serra, Fuoco and Ulysse de Pauw. Turner Motorsport’s Michael Dinan, John Edwards and Robby Foley were third, 65.864 seconds back in their BMW. This finish counts as an overall win in the Fanatec GT World Challenge America Powered by AWS season finale and earns them double points. Gounon, Ward and Philip Ellis were fourth, last car on the lead lap. The second AF Corse Ferrari of Miguel Molina, Pierre Ragues and Davide Rigon was two laps down in fifth.

The Pro-Am race started in a very unusual fashion when Wright Motorsports’ Charlie Luck and Crowdstrike Racing with Riley Motorsports’ George Kurtz collided on the warm-up lap and spun in turn 13 right before the green. Kurtz and Luck went from 11th and 12th on the grid to the rear.

Triarsi Competizione’s Charlie Scardina started from the pole, but quickly dropped back as teammate Conrad Grunewald took the class lead. Meanwhile, Racers Edge Motorsports’ Mario Farnbacher was penalized for spinning out K-PAX Racing’s Misha Goikhberg in the opening laps and forced to serve a drive-through penalty.

A number of potential contenders had mechanical issues. Wright Motorsports’ No. 45 Porsche with Jan Heylen driving went behind the wall in the second hour with a mechanical issue. Crowdstrike Racing with Riley Motorsports’ Ben Keating had issues later on as well.  The Crowdstrike Mercedes would later collide with the RealTime Racing Acura of Erin Vogel and spin, damaging the nose in the process.

The race ended up coming down to a duel between BimmerWorld Racing’s Bill Auberlen and Baumann. Baumann did everything in his power to get past, but began to drop off in the final 10 minutes. Then, Marciello and Fuoco caught up to them. The two overall leaders were able to get between Auberlen and Baumann, allowing Auberlen to scoot away to take the class win for himself, Chandler Hull and Richard Heistand in sixth overall.

Officially, BimmerWorld Racing’s margin of victory was a full lap over the SunEnergy1 Racing Mercedes of Baumann, Kenny Habul and Martin Konrad, but that was only because the overall leaders split the Pro-Am battle for the lead in the final five minutes. Farnbacher, Ashton Harrison and Christina Nielsen ended up 10th overall, two laps down in third. That was good enough to not only claim the Fanatec GT World Challenge America Powered by AWS class victory, but the Pro-Am full season championship for Farnbacher and Harrison.

TR3 Racing’s Jeff Burton, Corey Lewis and Jon Branam were four laps down in fourth. GMG Racing’s Klaus Bachler, James Sofronas and Kyle Washington were another lap back in fifth.

In the Silver class, there was only one entry.  That was the Samantha Tan Racing BMW M4 GT3 of Harry Gottsacker, Samantha Tan and Nick Wittmer. They ended up running as high as fourth before finishing in ninth overall, four laps down. They would have finished eighth, but were given a 57-second post-race penalty for late race contact.

The Am class only had two entries and both had major issues that required garage time. Ultimately, the Zelus Motorsports Lamborghini of Jason Daskalos, Jason Harward and Seth Lucas, all regulars in GT America Powered by AWS, took the win in 17th overall, 27 laps down.