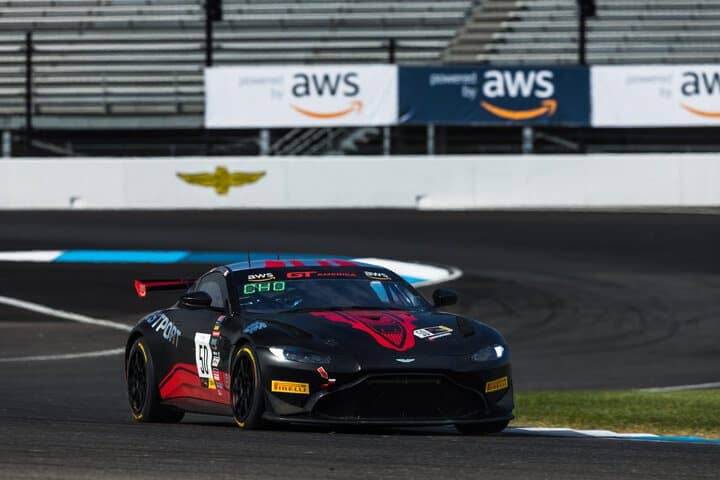 Crowdstrike Racing with Riley Motorsports’ George Kurtz led flag-to-flag Sunday morning (Oct. 9) at a cold Indianapolis Motor Speedway to score his fourth GT America Powered by AWS weekend sweep of the year. It is Kurtz’s 10th overall win in 16 races and his fifth in a row.

“It was a great year, certainly a great team with the switch to Riley Motorsports,” Kurtz told SRO America’s Amanda Busick after the race. “They gave me a great car all season. We had some ups and downs in some of the other series like yesterday, but we did really well here [in GT America] and showcased our talents, our team effort and it was a breakout season [for me].”

By virtue of having the fastest lap in Race No. 1 on Friday, Kurtz started from the pole and managed to get a good jump on Jeff Burton. Similar to the first race on Friday, GMG Racing’s Kyle Washington spun his Porsche in the first chicane on the opening lap. Unlike Friday, he was able to resume without a yellow being called for.

Kurtz’s lead was as much as 10 seconds over Schultis and Pilgrim, but he began to slow in the final couple of laps. It is unclear whether the lack of pace was due to a mechanical issue, or if he cut back his pace intentionally. Regardless, Schultis got close enough on the final lap to make things interesting before Kurtz took the win.

Kurtz’s margin of victory was 1.782 seconds over Schultis. Pilgrim was third, then Burton. Jason Daskalos was fifth.

In GT4, The Heart of Racing’s Gray Newell started on pole in his Aston Martin, but the man on the move was Premier Racing’s Adam Adelson. Adelson started 10th after being eliminated in a crash early on Friday. He was still in championship contention and knew that he needed to win.

Adelson got an excellent start, swept around the outside of multiple cars in the first corner, and eventually made it all the way to the lead on the first lap. He did everything he needed to do with a 15-point deficit to Jason Bell.

Once in the lead, Adelson pulled out a lead of roughly two seconds over Newell. However, it only took a few laps for Adelson to come back to the rest of the leaders.

Newell tried multiple times to make a move on Adelson to retake the lead. Adelson would take a defensive line in the best passing zones. Newell tried his best, but simply could not get by.

Bell was running in fourth, then lost that spot to Conquest Racing’s Custodio Toledo. That would have given the title on the road to Chouest-Povoledo Racing’s Ross Chouest. Bell was eventually able to get the championship lead on the road back by re-passing Toledo for fourth.

With four minutes to go, Newell was able to retake the class lead from Adelson in turn 4. Chouest could not follow at the time. A half lap later, Adelson went wide exiting turn 14 and clipped the grass. That allowed Chouest to make a move for second.

Adelson came back on Chouest in turn 1 and tried to get back past. Contact was made between the right front corner of Adelson’s Porsche and the left rear of Chouest’s Aston Martin. The contact busted a radiator on Adelson’s Porsche, ending Adelson’s race.

Toledo’s race ended shortly afterwards in the gravel trap in turn 4. With less than two minutes to go, SRO America officials decided not to throw the yellow here.

On the final lap, Newell slowed suddenly exiting turn 10. This allowed Chouest to take the lead and hold on to take the GT4 weekend sweep. With that, Chouest claimed the GT4 championship as well.

“[Knowing that I had the championship], it was a lot to take in,” Chouest said after the race. “I came into the race hopeful, but knew that it would take a strong drive from me and a lot of luck. I got both and I couldn’t be happier.”

Chouest finished seventh overall, 6.949 seconds ahead of Hattori Motorsports’ Seth Lucas at the finish. Bell ended up third and lost the title by three points. Newell coasted to fourth, while Accelerating Performance’s Moisey Uretsky was fifth.