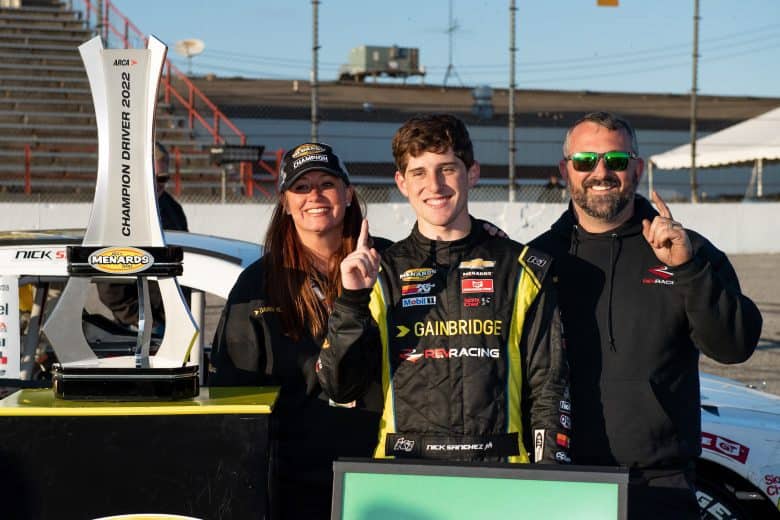 Toledo Speedway did not disappoint as the host racetrack for the ARCA Menards Series season finale. The Shore Lunch 200 at the 0.5-mile short track saw nine lead changes, seven cautions, the winning pass with three laps to go and some heated folks post-race: drivers, team owners and team personnel alike.

When the checkered flag flew, Nick Sanchez hoisted the championship trophy as he claimed his first ARCA championship. The driver of the No. 2 Rev Racing Chevrolet overcame an engine change before qualifying to finish sixth and claim the title.

Daniel Dye finished a gut-wrenching 18th after a broken right-front ball joint derailed his bid for the championship.

Rajah Caruth gained five spots from start to finish to finish fifth and wound up third in the championship standings.

Sammy Smith won the season finale with a bump-and-run to finish fourth in the championship standings.

Greg Van Alst rounded out the top five in the championship standings after he wrapped up his first full-time ARCA season with a ninth-place finish at Toledo.

The 2022 ARCA season is now complete, so where did the top running drivers finish in the power rankings?

In addition to entering Toledo with confidence, Sanchez was also more relaxed.

“Probably more relaxed in this one because you know exactly what you have to do,” Sanchez told Frontstretch pre-race. “You don’t have to worry about another race. If you do it, you’ll become a champion. It’s straightforward.”

Sanchez certainly provided some drama throughout Saturday. His team discovered a problem with the engine, so his Rev Racing crew members switched the engine, finishing as qualifying began.

Because Sanchez practiced, albeit in his teammate Caruth’s No. 6, he kept his qualifying position of eighth.

When the race began, Dye led a lap, so Rev opted to keep Sanchez out on track during the first competition caution to lead a lap and match the bonus point. While he slid back due to older tires, Sanchez never wavered in his pursuit of the title.

Moments before misfortune struck Dye’s No. 43, Dye passed Sanchez for a position. Yet the combination of Dye’s mechanical woes combined with Sanchez’s calm composure culminated in Sanchez winning the 2022 ARCA championship.

A six-time victor in the 2022 main series season, Smith passed Jesse Love and Grant Enfinger with a bump-and-run to win in his first ARCA trip to Toledo.

Love unhappily expressed his displeasure with Smith though.

“It was a racing move,” Smith told Frontstretch post-race. “Did I wreck him? No, I moved him. He’s just butthurt about it.”

Although the main ARCA season is over, Smith indicated his feud with Love is not over, saying, “He better watch his six.”

Smith finished the 2022 season with three straight victories. He’s more confident in the cockpit, and he added his secret for hopeful continued success is, “Keeping working hard and maintaining consistency.”

At an ARCA media event at the start of the race weekend, Dye spoke highly about the benefit of winning the ARCA championship.

“It’s been a good year, it’d be cool to finish it off for all the people that work on our program,” he told Frontstretch. “We got a lot of guys who work in the fab shop, the guys in the dyno shop, the design shop, all the people at GMS Racing who build fast racecars. To be able to give them a bit of success, we haven’t been able to put any win banners up.

:Winning a championship, at any level, raises your stock for sure. It would mean a lot for my career, put the boosters on it, bring some more eyes to what we’re doing. Trying to go all the way. Since I’ve been a little kid, my dream is to win the Daytona 500. Everything I can do to make that a little more realistic is going to be helpful.”

Before any ARCA cars ventured on track, Dye walked the entire 0.5-mile short track with his GMS teammate Grant Enfinger, the 2015 champion. Dye leaned heavily on his teammate, remarking, “So he’s going to be able to help me after practice and maybe follow him in practice.”

Alas, Dye spent the race battling mechanical gremlins. First, his No. 43 intermittently shut off and his championship odds ended due to the broken right-front ball joint.

“I think we’ve had a really good year,” he said. “We’ve had a couple of mechanical failures which have put us in this position behind in the points instead of ahead in the points. Stuff like blowing up at Iowa [Speedway], our engine box quitting at Berlin [Raceway], a little bit of trouble on pit road at Kansas [Speedway] as a team; without those mistakes by me or my team I think we would be in a much better position.”

Driving a gorgeous No. 17 honoring 10-time ARCA champion Frank Kimmel, Taylor Gray qualified fourth, an improvement after his David Gilliland Racing team made wholesale changes to the racecar during the practice session.

It’s a gorgeous paint scheme but it isn’t handling to @TaylorGray17_ liking. @dgr_racing is making big changes to the No. 17 during @ARCA_Racing practice at @ToledoSpeedway pic.twitter.com/cyDdd5kyQv

Gray wheeled his No. 17 to a fourth-place finish. He was not thoroughly pleased with the outcome, which speaks volumes for his growth as a racecar driver in 2022.

In a part-time ARCA slate consisting of 14 races, Gray racked up three wins — all at racetracks in conjunction with a national NASCAR series race there — 10 top fives, 12 top 10s and led 112 laps.

Despite leading only 34 laps in 2022, Caruth finished third in the ARCA points in his first full-time season. Driving the No. 6, Caruth learned a great deal this season.

“I learned a lot this year and I am thankful for the opportunity but really sucks not being in contention for it,” Caruth told Frontstretch. “I can point out every single race that we lost points, and I made a mistake in two of them: Iowa Speedway and Watkins Glen International. I need to learn how to look at stuff more positively. It is frustrating coming here and not having a shot for a championship.”

Caruth led the points for part of the 2022 season, but some bad luck and his inability to win cost him a shot at the championship.

“Ups and downs, hard to put a positive spin on it, to be honest with you, but there are some positive bright spots in the year,” he said. “Really just racing at the big NASCAR tracks; both Kansas events I feel like I performed well. I perfected running the wall there; that was a lot of fun.

“Low not being in victory lane, not contending for a championship today and the number of things that happened this year that were out of my control is frustrating. Not capitalizing, silly mistakes and crap that threw away the championship.”