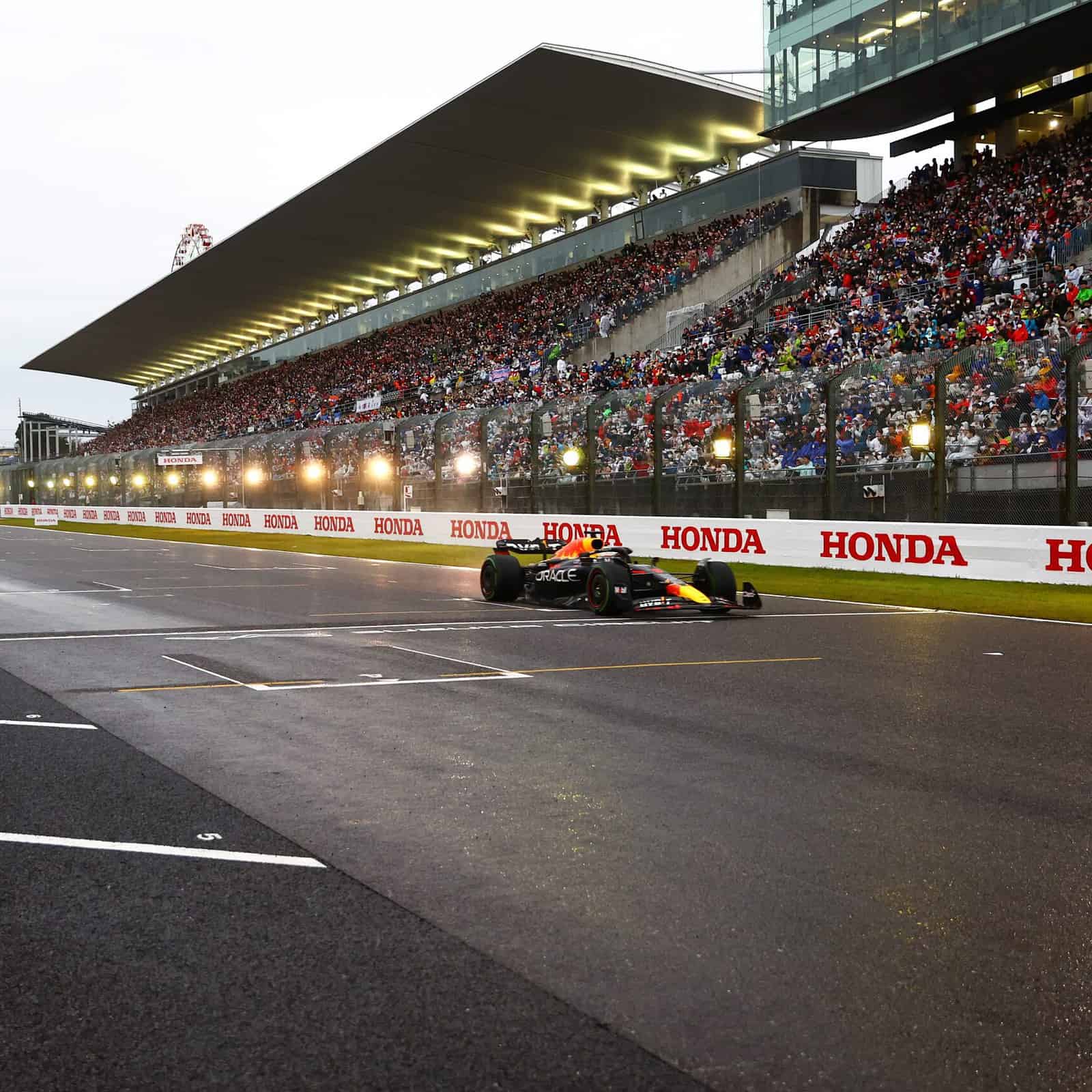 Sunday’s (Oct. 9) Japanese Grand Prix at Suzuka ended with Red Bull’s Max Verstappen on top of the podium and on top of the world, although the latter wasn’t immediately clear. The Dutchman won the race in dominant fashion while Charles Leclerc and Sergio Perez exchanged blows behind him, with a last corner misstep ultimately costing Leclerc his last hope of challenging Verstappen for the 2022 title.

With this result, Verstappen is now free to ride out the last four races of the season without worrying about the outcome of the racing, while the fight is properly on between Leclerc and Perez for second place in the standings. Leclerc almost, however, managed to escape Suzuka with Perez no longer a concern so far as the championship is concerned.

This all occurs, by the way, against the backdrop of a long red flag period as torrential rain hammered the circuit, eventually shortening the race to only 28 of 53 scheduled laps. With this shortened distance, confusion and controversy consumed the race’s conclusion as debate swirled around the paddock regarding how points would be awarded for the day.

Esteban Ocon and Sebastian Vettel collected finishes of fourth and sixth, respectively. Vettel, in his last Japanese Grand Prix before retirement, matched his season best finish with the result, having previously placed sixth in Azerbaijan. Nicholas Latifi likewise collected a season-best finish, and his first points of 2022, by crossing the line in ninth place for Williams.

After 28 laps of racing, Verstappen ended the day 27.066 seconds ahead of Perez, after Leclerc was assessed a five second time penalty for leaving the track and gaining an advantage while attempting to defend against Perez on the final lap.

Perez progressively harassed Leclerc through the final quarter of the race as the Ferrari driver struggled to keep his front tires alive. Leclerc overshot the entry to the Casio Triangle Chicane on the race’s final lap, leaving the track and gaining an advantage as he attempted to rejoin ahead of Perez. With the Ferrari sliding slowly on the slick surface, Perez made an attempt to get around Leclerc on the outside of turn 18 before he was cut off by Leclerc abruptly moving into his path. While Leclerc crossed the line in second place, he was ultimately penalized and relegated to a third-place result.

Behind Perez and Leclerc, Lewis Hamilton and Ocon likewise took the gloves off to determine who would take home fourth-place honors. Hamilton made life as difficult as his Mercedes would allow for the Frenchman, though the Alpine’s superior speed in a straight line left the Briton wishing for just that much more horsepower as he chased Ocon into 130-R lap after lap.

Vettel’s path to a sixth-place finish was about as twisted as the Suzuka Circuit’s majestic ‘S’ curves.

The German’s first run into turn 1 was backward, literally, after being clipped by Fernando Alonso on corner entry. Luckily for Vettel the race was red flagged before he could lose a terminal amount of time. Vettel and Latifi opted to gamble on the race’s restart by immediately pitting for intermediate tires while the rest of the field ran on full wets for a few more laps.

While the intermediates were slow to kick in, both drivers ultimately made up heaps of time while those who opted to stretch the full wets as far as they could go lost track position hand over fist – Zhou Guanyu and Mick Schumacher most painfully fell victim to this strategic misstep.

How could it be anything but good to be back in Suzuka, after two years?

The legendary Honda-owned circuit, opened in 1962, has been a near-continuous presence on the F1 calendar since 1987 and has cemented its place in history with ease since then. This year marks the thirteenth occasion on which Suzuka has determined the World Champion. In this, Verstappen joins the likes of Ayrton Senna, Alain Prost, Damon Hill, Michael Schumacher, Mika Hakkinen and Vettel , who have clinched the gold at the famous circuit.

The new 2022 cars took well to the track, despite the morbid weather that most certainly undid some of the race’s potential. Cars followed nicely in wet conditions, which bodes well for what is to come when F1 catches a sunny race day in Mie Prefecture, and passing was possible even in wet conditions – and without DRS.

With Suzuka already a classic track adored by fans and drivers alike, just add some proper lights to the circuit to mitigate the factor of receding daylight in Japan this time of year and you have a circuit as close to eternal as one can hope for.

The race’s opening laps were marred by safety concerns owing to the utter lack of visibility caused by the relentless rain which pummelled the circuit as the lights went out.

Ferrari’s Carlos Sainz retired from the race on lap 1 after slamming the barriers at turn 12, and Alex Albon pulled his Williams to the side of the track not far down the road with mechanical issues. Moments later, AlphaTauri’s Pierre Gasly arrived on the scene of the accident as a rescue vehicle was on track preparing to remove Sainz’s car from the racing surface.

The presence of this vehicle elicited a fierce response from Gasly – note that the last fatality in F1 occurred at Suzuka in 2014, in heavy rain, when Jules Bianchi’s Marussia collided with a rescue vehicle under yellow flag conditions. Bianchi succumbed to injuries sustained in the incident in July of the next year.

Glad to go home safe tonight. For the respect of Jules, all his family and for our safety and the one of the marshals, there should never be any tractor nor marshals on track in such conditions with such poor visibility. Period.

Controversy immediately erupted from this incident. During the red flag period brought about by the horrid conditions and stranded cars on track, multiple drivers took to Twitter to express their frustrations with Gasly’s encounter with a tractor on track. Across the proverbial fence, some pundits questioned why Gasly was traversing that section of track at speeds in excess of 200 kph. Gasly was eventually summoned to the stewards after the race on the count of speeding under red flag conditions, where he was assessed a 20 second time penalty.

Wtf. How’s this happened!? We lost a life in this situation years ago. We risk our lives, especially in conditions like this. We wanna race. But this… Unacceptable.

Not having a clip of David Croft announcing Verstappen as the champion as his Red Bull crosses the finish line won’t sit well with much of the F1 community.

Much was made of the points permutations that could have resulted in Verstappen taking the title home in Japan yet almost none of us foresaw a shortened race. As the race reached only 28 laps, it was understood that partial points would be awarded, with 19 for the winner, 14 for second place, 12 to third and so on. However, a piece of nuance within the FIA code clarifies that partial points are only awarded when a race is suspended before reaching full distance and cannot be restarted. Had the race gone uninterrupted until 28 laps in, and then been suspended, partial points would be in order.

As Sunday’s race was suspended and then resumed to the completion of the allotted time slot of three hours, full points were awarded, meaning Verstappen took home seven points over Leclerc, bringing his points lead to a total of 113, with only 112 points on the table for Leclerc over the next four races. The questionable side of all this is the confusion in Verstappen’s title victory not being clear to everyone as the race concluded. Even in the cool down room, Verstappen had to double check that the title had actually gone his way.

The rulebook seems clear enough on this one, but the apparent confusion from anyone and everyone involved in the broadcast of the race can easily be seen as having soured the moment for those watching at home.

We can’t award this section anyone other than the newly crowned two-time champion, can we? Not in good conscience, at least.

Vettel and Aston Martin’s strategic masterclass deserves a mention as well, though. Likewise, the tire strategy gamble that brought Latifi back into the points along with Vettel ought to have warmed a few hearts up and down the paddock as both the Canadian journeyman and the German veteran prepare to bid the F1 grid farewell at year’s end.

Verstappen just wants a straight answer in the cooldown room regarding his status as World Champion. “But I’m not though? I am?! You sure?”

Gasly spares no ambiguity on his feelings toward the rescue vehicle he encountered on track. “I could have killed myself. There’s this f****** tractor while I’m driving flat-out.”