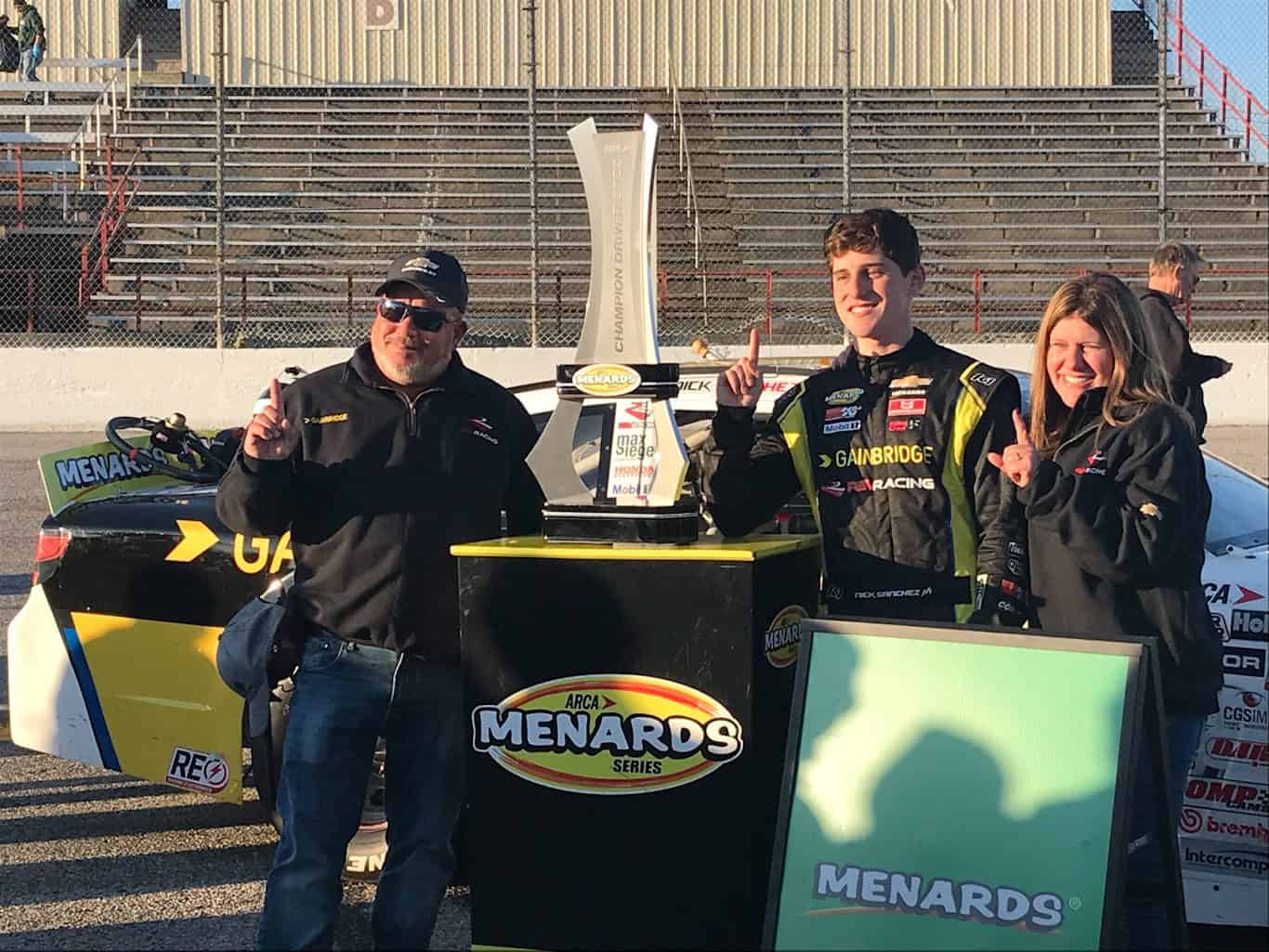 Sanchez finished the 2022 ARCA season finale as the last driver on the lead lap, but once Daniel Dye suffered mechanical woes, Sanchez piloted his No. 2 Chevrolet cautiously, not wanting to jeopardize the title.

“Throughout all 19 races, to be here at the end, that’s what you work for, and we’ve had pressure moments,” Sanchez told Frontstretch at a media event during the Toledo race weekend. “We’d like to have more wins, but at the end of the day, the championship has been my main goal.”

Sanchez earned the ARCA title on the strength of three victories at Talladega Superspeedway, Kansas Speedway and Michigan International Speedway.

The improvement from his 2021 season, in which he competed in 18 of the 20 ARCA events, is due to his experience and continual confidence in his team.

“I have more seat time,” Sanchez added. “Going to these tracks for the second or third time, you know what you want, and you know what you need. If you don’t have that, you’re not going to be very happy. I’ve gotten more confident in myself and what direction and feel I’m looking forward in the car.

Sanchez only led 116 laps in the 2022 campaign, but he finished with three victories, nine top fives and 16 top 10s. More importantly, Sanchez had no DNFs and completed all but 20 laps during the season.

At 21 years old, Sanchez is incredibly kind, even when he did not have the fastest racecar. After unhappily climbing out of his No. 2 after practice at Berlin Raceway earlier in the season, his crew chief Matt Bucher asked about the car’s performance. Sanchez only answered, “We need to go faster.”

When the checkered flag flew that night in Marne, Michigan, Sanchez finished in sixth place, one lap down. Not too shabby of a result, to say the least. Sanchez’s upbeat mindset, even after races such as that one, is something he and his parents both are proud of.

“You just cannot get ahead of yourself, cannot beat yourself down,” Sanchez said. “If you beat yourself down, you’re going to beat those around you down too, so you have to look ahead and when things don’t go your way, make them go your way. At the end of the day, it’s my boat and I’m driving it. If I steer off course, that’s on me. Be myself and do the right thing.”

Or as his father Rene Sanchez told Frontstretch after his son won the title, “Nick is confident in his team and they’re doing the best they can.”

Both Rene and Nick agreed one reason they were able to hoist the ARCA championship trophy was respect. As tempers flared post-race, Rene remarked, “[Nick] was as cool as a cucumber because his fellow racers raced him clean.”

“I’m one of the few drivers in the sport who doesn’t [have a mentor, racecar coach, etc.],” Sanchez added. “I’m solely here because of Max Siegel and Rev Racing. Jefferson Hodges, who led the team in the early years of my being there. He helped me a lot and he still helps me a lot.

“Rev Racing is truly why I’m here and continues to be the reason I’m here. All thanks to Max Siegel and everybody who works hard, not only for me, but for all of Rev Racing. They are the backbone. You definitely have to thank the people that get you here.”

Sanchez’s confidence in his team is admirable. In the two ARCA races preceding the season finale, Dye beat him and gained valuable points to whittle Sanchez’s lead down to only two points.

Yet on race day, Sanchez was as cool as a cucumber. Before the practice session, Rev discovered a problem with No. 2’s engine, so the team was forced to switch engines.

Although his team worked quickly to switch the engine before the qualifying session began, Sanchez was not worried. In fact, his confidence never wavered.

Impressively, the team successfully switched the engine right as the qualifying session began.

When asked if he’s nervous about the engine change, @Nicksanchez080 said, with a wry smile on his face, “No.” His confidence in his @RevRacin team is admirable.

Sanchez qualified eighth, six positions behind Dye who led lap 1, picking up a crucial bonus point. At the first competition caution, Dye was in fifth place with Sanchez one spot behind in sixth place.

Yet Rev left Sanchez out on track rather than bring him to pit road. While a few folks on pit road thought the decision was to gain track position ahead of Dye, in reality, Sanchez gained the lead to match Dye’s bonus point.

The No. 43’s mechanical gremlins began as Dye’s racecar intermittently lost power, costing him several spots on the restart. From that point on, even though Sanchez struggled to refire his No. 2 after the second competition caution, Sanchez regained momentum and finished 12 spots ahead of Dye to claim the crown.

Thank you to our partners @TeamChevy – we look forward to a successful future together! @Nicksanchez080 pic.twitter.com/cAIuHZLSQb

When the checkered flag flew, I stood behind the No. 2 pit box awaiting the Rev celebration. Initially, the team’s joy seemed subdued. As one team member told me, “It was surreal.”

The celebrations on the frontstretch contained the expected joy, though. In the garage post-race, Sanchez’s mother Shanie Sanchez proudly carried the 2022 ARCA championship flag.

When I commented on how the drama unfolded throughout the day, Rene happily bragged, “It was a good race!”

“Nick and the whole team worked so hard and faced so much along the way,” Shanie added.

This championship is the result of hard work and determination. Sanchez has been with Rev for many years, or as Rene said, “We started a long time ago racing.”

Sanchez is not done racing in 2022, though. He has two more NASCAR Xfinity Series starts left with Big Machine Racing, at Las Vegas Motor Speedway and his home racetrack, Homestead-Miami Speedway.

Sanchez wouldn’t reveal his 2023 plans yet. In the short term, he also did not know how he would celebrate the ARCA championship.

“We don’t know yet, but we’ll have fun,” Rene promised.

Pre-race, he told his son the ARCA championship was the only birthday present he wanted. After 200 laps at the 0.5-mile Toledo short track, Sanchez fulfilled his father’s wish. It capped off an outstanding 2022 for the Rev driver, who summarized it all as, “100% [it’s] been a memorable year.”