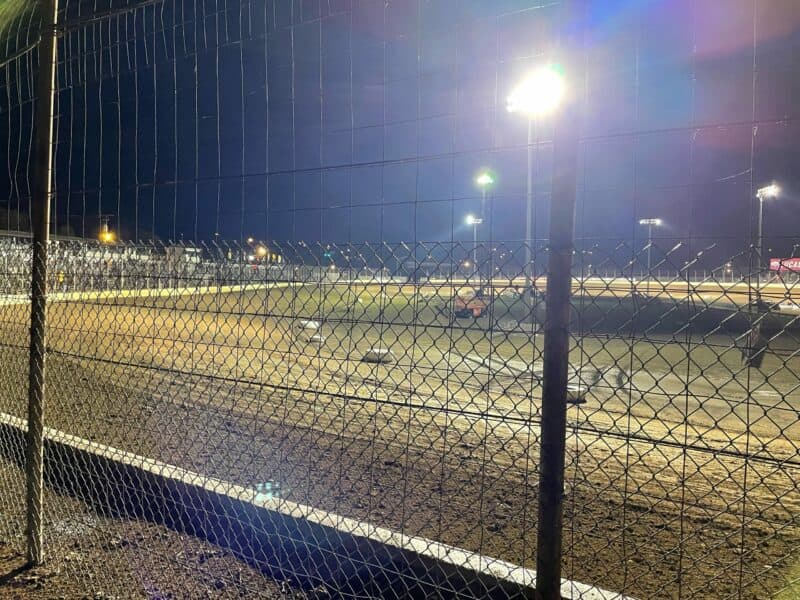 Nineteen-year-old Garrett Smith led all 100 laps to become the youngest Dirt Track World Championship winner in event history in a snoozer at Portsmouth.

After a trying season featuring multiple issues with the droop rule and rookie mistakes, Garrett Smith broke through in a major way, leading all 100 laps and weathering a flurry of late-race restarts to win the Dirt Track World Championship at Portsmouth, by far the richest and most prestigious win of his budding career.

19 year old @garrett_smith10 leads all 100 laps flag-to-flag to earn the biggest win of his career @PRPDirt in tonight’s 42nd annual @DTWCPRP, worth $100,000! pic.twitter.com/bTdeZUai7r

Smith, who was visibly emotional in victory lane, never was able to gap the field and came within a nose of losing the lead to Brandon Overton 14 laps into the feature before the first caution of the night flew. However, as the night went on and the track became bottom dominant, Smith remained composed and maintained his track position on the bottom, all the while enduring seven restarts in the final 20 laps as flat tires spoiled Saturday night’s feature.

Tim McCreadie clinched the 2022 LOLMDS title simply by signing in at Portsmouth this weekend. Garrett Alberson won the 2022 Rookie of the Year crown.

McCreadie didn’t add the Dirt Track World Championship to his resume, but simply by signing in for competition Friday at Portsmouth he clinched his second consecutive Lucas Oil Late Model Dirt Series championship. As much as it may diminish the stock of the LOLMDS, part of me hopes that the veteran joins the ranks of Jonathan Davenport, Chris Madden and Mike Marlar in dropping points racing for poaching big money in 2023. McCreadie finished second in Saturday’s feature and may well have won had the last two yellows not flown.

Yes, Smith benefitted from a narrow racetrack and an outbreak of yellow fever that derailed the two most significant challenges for the lead he faced all night. But three items here. One, Smith saved his tire and hit his marks. Two, Smith was smart enough to seek veteran advice from Scott Bloomquist pre-race and did what he was told to win the DWTC feature.

And three, on a weekend where the big leagues of stock car racing saw the ugly side of raw emotion create literal danger in Las Vegas, Smith’s victory lane interview was on the opposite side of that spectrum and refreshing to see.

Hudson O’Neal ended his tenure (at least on the LOLMDS tour) with Double Down Motorsports in fine fashion, finishing fourth in the Dirt Track World Championship after stealing a transfer spot from the nation’s top late model driver in Davenport on the last lap of their heat race Friday. It’s also worth noting that O’Neal outran Brandon Sheppard and the Rocket house car that he’ll be taking over for 2023.

Jimmy Owens carried over the momentum he earned dominating the Flo Racing Night in America feature at 411 Motor Speedway on Tuesday, rebounding from a mechanical issue that prevented his team from qualifying on Friday to earn hard charger honors in the A-main, going from 21st to seventh after scraping into the field via a B-main.

Saturday night proved to be a bad night carrying the colors of Best Performance Motorsports. First, Eldora Speedway veteran Jerry Bowersock got collected in the worst of the many yellow flags that marred the first B-main. Tyler Erb meanwhile had to use a provisional just to make the Dirt Track World Championship field and made good use of it, charging from 23rd into the top 10 roughly halfway into the feature. That all went out the window 13 laps short of the finish courtesy of a flat right rear. Erb came home 16th.

Shannon Babb arguably had the worst luck of anyone that suffered a flat tire Saturday, and that was no small feat given how many victims there were. Making his first start in the Dirt Track World Championship in more than five years, Babb ran as high as fourth before succumbing.

It’s harsh to list Ricky Thornton Jr. in this section given that he finished eighth Saturday. But considering his last three features at Portsmouth were a win and two runner-ups, eighth is a rough go of it.

Let’s face it. The track surface at Portsmouth on Saturday night was an abject failure.

I didn't realize @lucasdirt was running the #DTWC at Cherokee

Said the great James Essex in the closing laps of Saturday’s race, “five more flats and he [Davenport] will be up front. I don’t know what else to say.” Nothing else needs to be said. Watching this cluster it’s a shame Portsmouth didn’t take a cue from Knoxville and Pittsburgh to cut the race distance down.

Tradition or not, there’s no reason for this event to be termed the “Dirt Track World Championship.” It’s not the richest race. It’s not the most prestigious race. It didn’t draw the biggest car count of the season. It requires no form of qualification to enter. It is a points event for one of the three top late model series in America. And no disrespect intended, but two years running now the feature winner is hardly fitting of the title “World Champion.”

Given the way his season has gone, I’m not sure there was a more suspenseful droop check in all of 2022 than when Smith had to go back to the pits after taking the checkers Saturday night.

I’m not going to rewrite my Friday column here, but I’m still shaking my head at the ticketing policy utilized at the Dirt Track World Championship. Worth noting the entirety of the backstretch grandstand was largely empty Friday night.

Of course, that may well just be a case of race fans being smart, regardless of pricing. I was at Lernerville Speedway on Friday night, which, like the Dirt Track World Championship, ran a heat-race only program on Friday leading up to their Saturday main events. It was outright said in the drivers’ meeting at Lernerville that drivers needed to take it easy and get through their heats, that money didn’t get paid till Saturday. Not really a compelling way to sell tickets. And it was worth noting that there were more cautions in Saturday’s first B-main than in all six heats combined Friday.

After watching Saturday’s first B-main and the flood of cautions through the back of a huge 25-car field, the question has to be asked… would it be a better race to see smaller B-mains with a winner-take-all format? Getting from 25th to a transfer spot just isn’t going to happen in 15 laps and cautions are less likely in a 12-car field. Good problem to have though, the car count for the Dirt Track World Championship was solid.

Can’t say I’m a fan of the tire rule that was used Saturday night, which stated that unless a tire went flat teams could not change their shoes. That’s more open to manipulation than just having an open-tire rule with strict enforcement on intentionally drawing yellows.

Where it Rated (on a scale of one to six cans with one a stinker and a six-pack an instant classic): We’ll give the Dirt Track World Championship two warm Portsmouth Pilsners. Smith’s big win did break some monotony at the front of the field and the emotional display he gave post-race was a silver lining. But the reality is there was nothing crown-jewel worthy about anything that happened Saturday night. The LOLMDS deserves a better finale.

Dear @lucasdirt
Please save us all and move the DTWC out of @PRPDirt in 2023. every year it's so painful to watch…

Up Next: Thinkin’ Dirty heads north to see the center-drive modifieds hit the hard clay of the Orange County Fair Speedway for the $40,000-to-win Eastern States weekend. Coverage can be found via pay-per-view through the racetrack.