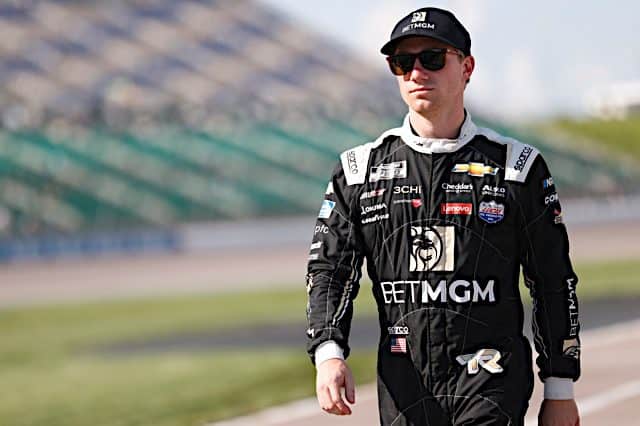 The NASCAR Cup Series travels from Las Vegas, Nev. to the Sunshine State this weekend. Let’s see who you should consider placing in your daily fantasy NASCAR DraftKings lineups for the Dixie Vodka 400 at Homestead-Miami Speedway, airing Sunday (Oct. 23) at 2:30 p.m. ET on NBC.

Cup drivers take on a 1.5-mile racetrack for the second week in a row, but Homestead ain’t your normal intermediate. This track is shaped more like a wide paperclip or something similar, with a long and straight frontstretch and backstretch. Also, at 19 years of age, the track surface is quite a bit older than some of the other ovals of the same length. That means tires wear down a bit more there.

Since it’s a high tire wear track, certain drivers will run very close to the wall, which often helps their speeds. So for DraftKings, you’ll want to play those who have performed well at other tracks that eat up tires this year (like Darlington Raceway or Auto Club Speedway).

But don’t forget to check out who was quick at the last few 1.5-milers in the playoffs, like Las Vegas Motor Speedway, Texas Motor Speedway and Kansas Speedway. Those places may be shaped slightly different, but they’re still relevant when it comes to Homestead handling.

A couple more stat categories you can examine are Homestead’s track history and the speed results from the test held there recently. Of course, the test didn’t have every driver, as multiple ones shared the same car, but any experience is valuable with the Next Gen chassis. And of course, take a look at Saturday’s lone practice session and qualifying to see where everyone is starting from.

Before I share the drivers I’m playing on DraftKings, here’s what happened last week at Las Vegas Motor Speedway:

This lineup probably would’ve been just fine if Bubba Wallace hadn’t done what he did — hitting the wall and coming back across the track and into Kyle Larson. After all, it was the same car that he won in at Kansas a few weeks ago and Wallace had just won stage one, too. Instead, his negative DraftKings score put me on the wrong side of the green in the $3,000 Quarter Jukebox tournament.

The top score in that contest was 377.45 and had Ross Chastain, Kyle Busch, Martin Truex Jr., Joey Logano, AJ Allmendinger and Justin Haley.

Tyler Reddick is the most expensive driver on the slate, partly due to his ability to rim ride this racetrack. I mean, just look at his results at Homestead: In 2020, he gained 20 spots en route to a fourth-place finish, though he forgot the race wasn’t over yet on the final lap. Then, last spring, he advanced from 35th all the way up to second.

And although the current No. 8 Richard Childress Racing driver earned his first two Cup wins on road courses, he’s also done well on other intermediate ovals. At Auto Club, Reddick was out front for 90 laps before a tire issue left him sitting 24th. Then, at both Darlington events, he earned a podium finish before his win in the playoffs at Texas.

Reddick won that race after leading 70 laps, and at Las Vegas last week, he placed sixth after an additional 32 circuits out front. He should be fast this Sunday and not only lead laps, but also record some fastest laps, bonuses which would boost your DraftKings score.

Logano is already locked into the Championship 4, so he might just be a bit more conservative. However, this is a Cup Series champion we’re talking about here. He certainly still wants to win races, whether he claimed his spot at Phoenix Raceway or not. That’s partly why he’s on my initial roster.

The No. 22 Team Penske driver has already shown speed at Homestead, laying down top two lap times in both days of the test. Logano’s also been quick at some racetracks this year that run similar to Homestead. Besides winning at Las Vegas last week, he was second at Texas, won Darlington in the spring after leading 107 laps and finished fourth there last month.

As far as Logano’s track history goes, he didn’t do so well in the last couple of events at Homestead. He did earn a top-six result in each race from 2015 through 2019, though, including his victory in 2018 after he led 80 laps. A 17th-place starting position for Sunday also leads to hope of position differential points.

I expect him and Reddick to be two of the fastest drivers this weekend.

William Byron won the most recent Homestead event last spring in dominant fashion, staying out front for 102 circuits. Even more impressive was that he began the race from 31st, showing that the winner can come from anyplace in the field. It was Byron’s second straight top 10 at this track, as he earned a ninth-place finish in 2020.

Earlier this year, the No. 24 Hendrick Motorsports Chevrolet driver was in the lead during the closing laps at the spring Darlington race when he received a bump from Logano. That caused Byron to get loose and crash into the wall, dropping him to 13th despite a dominant car.

Byron did well the second time around at Darlington, too, coming home eighth after leading 50 circuits. Some other notable results are a sixth at Kansas, third at Bristol Motor Speedway and seventh at Texas. He’s a little bit pricey on DraftKings, but I still expect him to run up front.

I mulled over whether to choose Erik Jones or Michael McDowell this week, but ultimately decided on the No. 43 driver of Petty GMS Motorsports. Jones won at Darlington in September after Kyle Busch, who dominated the race, lost an engine while leading late.

Jones has earned three top 10s in the last four races, including a sixth place at Texas and an eighth last week at Las Vegas. Also, back in February at Fontana, he earned a third-place result.

Unfortunately, Jones hasn’t done very well at Homestead, save for a third place in 2019 after qualifying 16th. It’s a bit unclear how Jones will do this week, qualifying 22nd, but the potential for a much better performance is there.

Aric Almirola (who is no longer retiring after this year) has a few good results at Homestead. In 2020, he drove from 21st up to fifth. Also, in 2018 Almirola brought home a ninth-place result, showing that his average finish isn’t really indicative of how he can run.

This season, Almirola drove the No. 10 Ford of Stewart-Haas Racing to an 11th in both Darlington races, gaining 11 positions in the fall event. Also, he went from 31st to sixth at Auto Club, 32nd to eighth at the second Richmond race and was fifth at World Wide Technology Raceway at Gateway. Though he hasn’t been up front the last few weeks (teens in the last three races) Almirola could still bring home a top 10 at Homestead in his home state.

Let’s face it, Cole Custer is merely an inexpensive filler in this lineup. He finished 22nd and 23rd in the last two Homestead races — not really flashy. So why is he among those who I’m considering?

Well, besides his low salary, Custer has earned a few good results at some intermediate racetracks this year. He gained 10 spots at Fontana to finish 11th. Also, at Pocono Raceway he drove from 32nd to 17th, a big jump for this price range. And at Darlington last month, he advanced 16 positions to 14th.

Let’s hope Custer has a good DraftKings score, so he doesn’t bust your lineup.