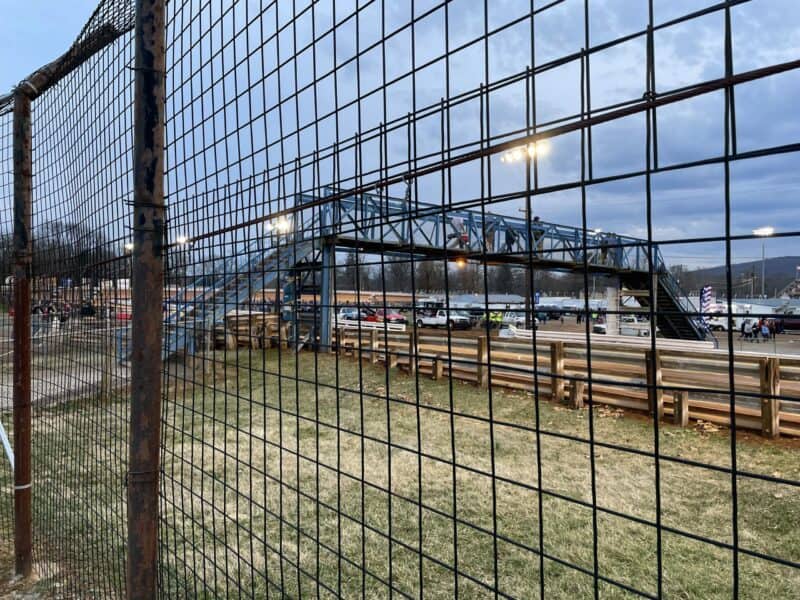 Lance Dewease may not be defending his track championship in 2022, but that didn’t stop him from grabbing Williams Grove’s richest prize of the season, leading all 40 laps to score the $75,000 win in the National Open. Dewease led a Pennsylvania Posse sweep of the podium that saw the Outlaws shut out of the top three in their own event.

It’s a PA Posse podium sweep at the #NationalOpen60!

While the score sheet says Dewease led all 40 laps, it wasn’t without a couple of challenges from runner-up Brent Marks. Marks briefly caught up to Dewease on lap 14 before lapped traffic derailed his momentum, but the big moment came on a lap 29 restart, which saw Marks take the lead outright from Dewease only for a caution flag for a flipping Giovanni Scelzi to erase the lap before it could be scored.

Williams Grove also saw a humdinger of a points race decided on track, with Danny Dietrich taking the track championship away from Freddie Rahmer courtesy of a top-10 finish; Rahmer failed to qualify for the A-main.

2022 has been a year to remember for the Pennsylvania Posse and it was fitting that they swept the National Open podium. Dewease’s victory marked the fourth consecutive decade in which he scored a win in Williams Grove’s crown jewel race. Runner-up Marks scored another strong finish in a campaign in which he swept the big races at Eldora and stole a victory from the Outlaws regular on their home track in Texas en route to a nation-leading winnings total. And third place went to Anthony Macri, the national leader in 410 sprint car wins. Take a bow Keystone crowd.

What a week for Dietrich. After making waves in a national Twitter feud with NASCAR Cup Series star Denny Hamlin, Dietrich rebounded from an on-track scuffle with Macri at BAPS Motor Speedway earlier in the weekend to steal the 2022 Williams Grove track championship, besting WoO regular James McFadden to finish just far enough into the top 10 to take the crown from Rahmer. No driver in the field will complain about having a $15,000 points fund (that’s what it was in 2021 anyway) added to their National Open winnings.

Also getting the job done in the finishing order was Gravel, whose top-five finish was an apt capitalization that makes stealing the WoO championship at Charlotte next month a very real possibility.

After 70+ races, the World of Outlaws @NosEnergyDrink Sprint Car Series championship comes down to the very end.

The deciding factor is @World_Finals at @TheDirtTrack at Charlotte on November 2-5.

You can’t ask for much more than this. 🙌 pic.twitter.com/B3c0RxYxXk

It was a real competition for who was the most vexed driver at Williams Grove Saturday. I’m giving it to Marks by a nose, as another 100 feet and lap 29 would have counted, he would have lead Dewease prior to the red flag for Scalzi’s flip and the National Open may well have had a different winner.

But damn if Rahmer didn’t have a bad night as well. To lose a track championship failing to qualify for the A-main is as harsh as it gets.

And let’s not forget Sweet, who suffered his first DNF in nearly 70 races this season Saturday night. If nothing else the World Finals are going to be as suspenseful as they’ve been in years.

That’s the astounding streak built by @BradSweet49 and @KKRDirt — a stat that has propelled them to three-straight #WoOSprint championships — which finally came to a halt last night at @WilliamsGrove. pic.twitter.com/MWi3qGzXH4

Three drivers went flipping during Saturday’s National Open. Jason Whittall opened the flip count coming to the end of the third heat race. Robbie Price then went over on the first lap of the B-main and had to take a provisional to make the feature. That left the final tumble of the night to Scelzi on lap 29 of the feature. All drivers were uninjured.

While Williams Grove Speedway is fortunately not joining the rapidly growing ranks of dirt tracks being closed after 2022, the most iconic part of the property is no more. Saturday’s National Open marked the final race contested at the track with the iconic backstretch bridge, which will be removed for the 2023 season due to safety concerns with the structure as it relates to flipping sprint cars. Rumors indicate that the old bridge will be making its way to a museum and that a new bridge may well be in the works.

Looks like to be the last race for the historic bridge @WilliamsGrove pic.twitter.com/4RLw66gDhK

I’ve got no issue with progress in the name of safety. But seeing the bridge get removed while the track’s barely-there retaining walls continue to lack catchfences that could have prevented Marks from destroying track billboards or Bryan Bernheisel from leaving the ballpark and spending much of 2021 concussed seems the equivalent of putting a band-aid on a broken leg. If you’re going to remake Williams Grove, go all in and do it.

And if we’re going to upgrade the Grove, how about some NASCAR-esque instant replay cameras? It was an awful close call that saw Marks’s fantastic lap 29 move on Dewease thrown out. I’m not questioning the call, but a picture’s worth a thousand words.

Scheduled remark. If racecars can’t go the full race distance without having to red-flag the event for fuel, shorten the damn race. It’s not a 40-lap race when drivers run 26 laps, take a breather, change the cars, refuel and then run a 15-lap sprint.

Johnny Gibson doesn’t miss much calling sprint car races, but making not even a passing mention of Haudenschild’s lap 15 spin was a big-time miss.

Does @dirtvision have more than 2 cameras and are they ever on the accidents happening?

One of the more interesting subplots Saturday night was how the Williams Grove drivers’ championship was also on the line, as the track is one of the few remaining that runs 410 sprint cars as a weekly class. It was a great storyline and a hell of a drive that saw Dietrich improve 11 positions during the feature to win the points crown, but I do have to wonder if having the track championship settled by a World of Outlaws touring series race, one that ultimately distorts the field in a major way ultimately defeats the purpose of having a track points chase?

I get that Williams Grove is a bigger racetrack among those the WoO contests, but I don’t remember DirtVision’s pit-area camera shots being as grainy and static as they were Saturday night.

Anyone else surprised Shark Racing didn’t show stronger over the weekend?

Winner’s share of the 50/50 Saturday night at Williams Grove.

How it Rated (on a scale of one to six cans with one a stinker and a six-pack an instant classic): The 2022 National Open scores four Yuenglings. It was possible to pass, as Macri demonstrated, and the subplot seeing Dietrich challenge Rahmer for the track championship was a welcome distraction, as were Sweet’s troubles.

Trouble, however, is the racing groove at the Grove never widened out and sans Marks getting close on lap 14 Dewease stunk up the show up front. And take a half-can away for a scheduled mid-race fuel stop.

Up Next: Thinkin’ Dirty heads east to Delaware for the return of the Short Track Super Series Elite tour. Coverage of the $25,000-to-win Melvin Joseph Memorial for the center-drive modifieds will be available Saturday on Flo Racing.