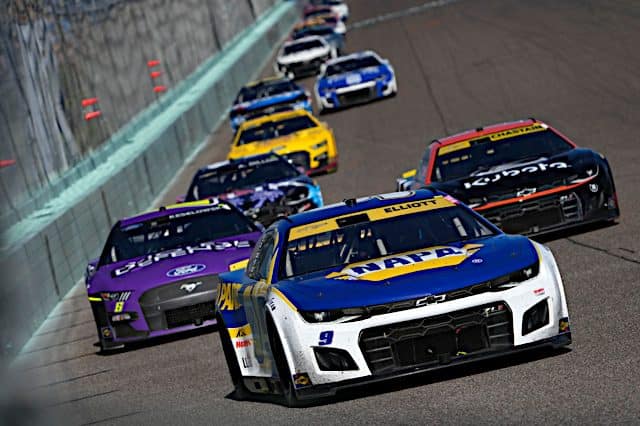 Homestead-Miami Speedway is a favorite of a lot of the drivers on the grid these days. On paper, it allows for multiple grooves with graduated banking and a wide racing surface. In practice, this is the 20th year that NASCAR has raced on the current surface in Homestead. While the surface is still quite smooth, it is rather coarse and wears tires quickly. As a result, drivers move up to the wall pretty quickly.

Naturally, prior to the race, the focus was on the whole mess with Bubba Wallace and Kyle Larson from back in Las Vegas. In the time since Las Vegas, both Jeff Burton and Kyle Petty have been outspoken about how they didn’t think the penalty of a one-race suspension for Wallace was harsh enough. Petty thinks that the penalty should match the crew chief penalties that have been given out for losing wheels more than a dozen times this year. If that were so, Wallace would be out the rest of the year and miss the Clash at the Coliseum in February.

Petty also thought that the fact that Wallace shoved Larson outside the car should have played a role here as well. Dude, you know it wasn’t going to play a role. Unless Wallace grabbed a non-gimmicked folding chair and tried to hit Larson upside the head with it as if this were an Attitude Era pro wrestling match, NASCAR isn’t going to suspend a driver for fighting. They might suspend crew members for it, but not drivers.

Burton believes that there should be an escalating penalty where the next time this happens, it should be a two-race suspension, then three and so on. I don’t think that’s necessarily setting a precedent. That’s just compounding a penalty. Given Burton’s position within the sport, it could be argued that something along those lines has been pitched fairly recently.

Steve Letarte was fine with the one-race suspension, but thought that they should have fined him as well. I can see that. The fact that they didn’t actually surprised me.

In all honesty, I was surprised they suspended Wallace at all, knowing how much NASCAR has gone out of their way to use stupidity like this for promotional purposes over the years. Last week, I wrote that I thought a points penalty and a hefty monetary fine could be in the cards for Wallace, but not a suspension.

I think Christopher Bell getting swept into the crash probably played a bigger role than anyone has really let on. It seems like NASCAR substituted the suspension for a hefty fine.

Marty Snider did note that NBC Sports invited Wallace to join via Zoom for an interview, but he declined. Not exactly surprising. Other than his statement released on Twitter last Monday, he’s been radio silent since he left the track in Las Vegas. If you’re wondering how Wallace spent the race, it appears he spent it at the 23XI Racing shop in an office.

Just @DoorDash ‘d some Humble Pie for lunch. Ready to sit back and help @23XIRacing get it done today. 👊🏾 pic.twitter.com/5vYqFVTJkO

Am I surprised that the Las Vegas mess was the first thing covered on Countdown to Green? No, not a chance. I knew going in that they were going to talk extensively about it.

The race itself was equal parts anti-climatic and quirky. We’ll start with the quirkiness first.

Sunday’s race ultimately swung when Tyler Reddick crashed with 23 laps to go exiting turn 2 to bring out the fourth and final caution of the race. That brought everyone to pit road for the crucial final stops. Then, this happened:

Jeepers. Having covered five Cup races for Frontstretch in Homestead previously, I can attest to the sun being brutal there late in the afternoon. The only place I can think of that would be worse would be Phoenix before they built the grandstand entering what is now turn 3. I 100% believe Martin Truex Jr. when he said that he really couldn’t see much. When NASCAR held the season finale in Homestead, the race was four weeks later and started a little later in the afternoon. As a result, a scene like what you saw Sunday would have only occurred in the first half of the race.

That was just the most notable incident on pit road. Denny Hamlin almost hit Josh Bilicki at one point. A couple of drivers nearly lost wheels, too.

Audio from Larson’s radio was played indicating that Larson thought that Truex was going to miss his stall. I think so as well. Truex’s crew sure didn’t think so, though. After the race, Truex more or less admitted that he was at least partially responsible.

The rather unusual scenario here essentially won the race for Larson. Strange way to win. NBC Sports seemed to do a pretty good job in breaking down what happened. I do believe that they needed to find a way to show the viewers just how bad the glare actually was. We’re talking about another scenario where the streaming cameras could have come into play.

Earlier, Ryan Blaney spun exiting pit road during a round of stops under green to bring out the third caution. This was a rather embarrassing moment for the Penske racer as he apparently tried to upshift to first from second. That’s not going to work.

NBC Sports didn’t really have a good view of this incident. You had to squint at the one replay we got to see it. Blaney’s lucky that he didn’t roast his engine doing that. It was only after the race that we truly found out what happened.

Outside of those quirky incidents, Sunday’s race was not the most exciting. Larson had the field dead to rights. He pulled away to nearly a 10-second lead on second place. Truthfully, Sunday’s performance is something that Larson should have done in the Cup Series at Homestead multiple times by now. Really, the only reason why it hadn’t is the fact that Homestead was the season finale for so many years.

At the beginning of runs, there was a good amount of racing for position, and NBC Sports seemed to do a decent job in bringing that action to viewers. However, once you got 15 laps into the run, it was ring around the rosie next to the wall. That really isn’t that different than what you’ve seen there in recent years, though.

When you get that kind of situation, you have to make use of all of the assets you have available to provide a compelling broadcast. To that degree, I thought they did OK, but there was a definite lull for much of the race.

As compared to recent years, there was a little less playoff driver focus than we’re used to. That is likely due to the fact that non-playoff drivers have played a bigger role this year than ever before. That said, of the top drivers on-track since the playoffs started, the top seven are all in the Round of 8. The sole exception to that rule is Chase Elliott, who has struggled in the playoffs at times. Note that Justin Haley was beating Elliott in the points since Darlington entering the race.

After the Truex-Larson pit road incident, the final run of the race was marked by a series of fierce battles, particularly one between Ross Chastain and AJ Allmendinger. This was a good, clean battle to watch. I hope those in attendance in Homestead liked it. I know Earnhardt Jr. did. Both Chastain and Allmendinger did as well.

Like many people, you may be wondering what happened to cause all that smoke on the final lap of the race. NBC did not really reference it at all, but Ty Dillon actually spun his Sunseeker Chevrolet in turn 4 on the final lap.

Dillon ended up on the apron and was able to get back underway. It ultimately did not affect the finish, but probably should have been noted.

Post-race coverage was once again split in two. Viewers on NBC got interviews with Larson and Truex, along with a point check before the network left for the evening news. On Peacock, there were additional interviews with Chastain, Allmendinger and more.

With the non-playoff drivers playing a bigger role in the playoff races this year, I’m happy to see them not being ignored as much as in prior years. They’re really throwing a wrench into the proceedings and I’m happy to see it.

Overall, Sunday’s race was a decent event, but very quirky. It’s not every day that a whole race effectively swings because of sun glare. There was good racing to be had and NBC Sports did a good job at bringing it to viewers in and around the restarts. Once the field got a little spread out, it became much tougher. It is in that time period where broadcasts are won and lost. They were pretty much in the middle.

That’s all for this week. Next weekend, the NASCAR Cup and NASCAR Xfinity Series teams will be at Martinsville Speedway to wrap up the Round of 8.  By Sunday night, we’ll know who will be racing for a championship in all three of NASCAR’s National-level series. Formula 1 teams will make the 907-mile haul to Mexico City to race at the Autodromo Hermanos Rodriguez.  TV listings are here.

We will have critiques of the Cup and Xfinity races from Martinsville in next week’s edition of Couch Potato Tuesday here at Frontstretch. In The Critic’s Annex, we’ll cover the Contender Boats 300, where Noah Gragson stomped the field and continued to show that his conditioning is not the best.

The glare at Darlington is pretty bad too.

I found a picture of Don Biederman on Jerry Makara’s hood at Pinecrest.

You have to scroll down but it also shows some of the cars from the 60s and 70s. Please take a look at the past race cars.

And here’s an article from Frontstretch on Jim Hallahan, a legend from Ontario who moved to Nova Scotia. He also knows about losing a child to racing.

If Ty had spun the lap before the white flag the caution would have come out to set up a GWC.

I found it strange that the Xfinity is going to Martinsville and not the Trucks.

There was an odd tinge to your normally mostly objective Couch Potato articles this week Phil. Unsure why you’re opinionly defending Wallace and not just reporting on what was said. If color is taken out of the incident(Larson is part Asian by the way) a driver performing multiple suspension worthy life threatening acts. Did’nt Jimmy Spenccer get a multi race suspension for punching Busch in the nose? Anyhoo, just sayin