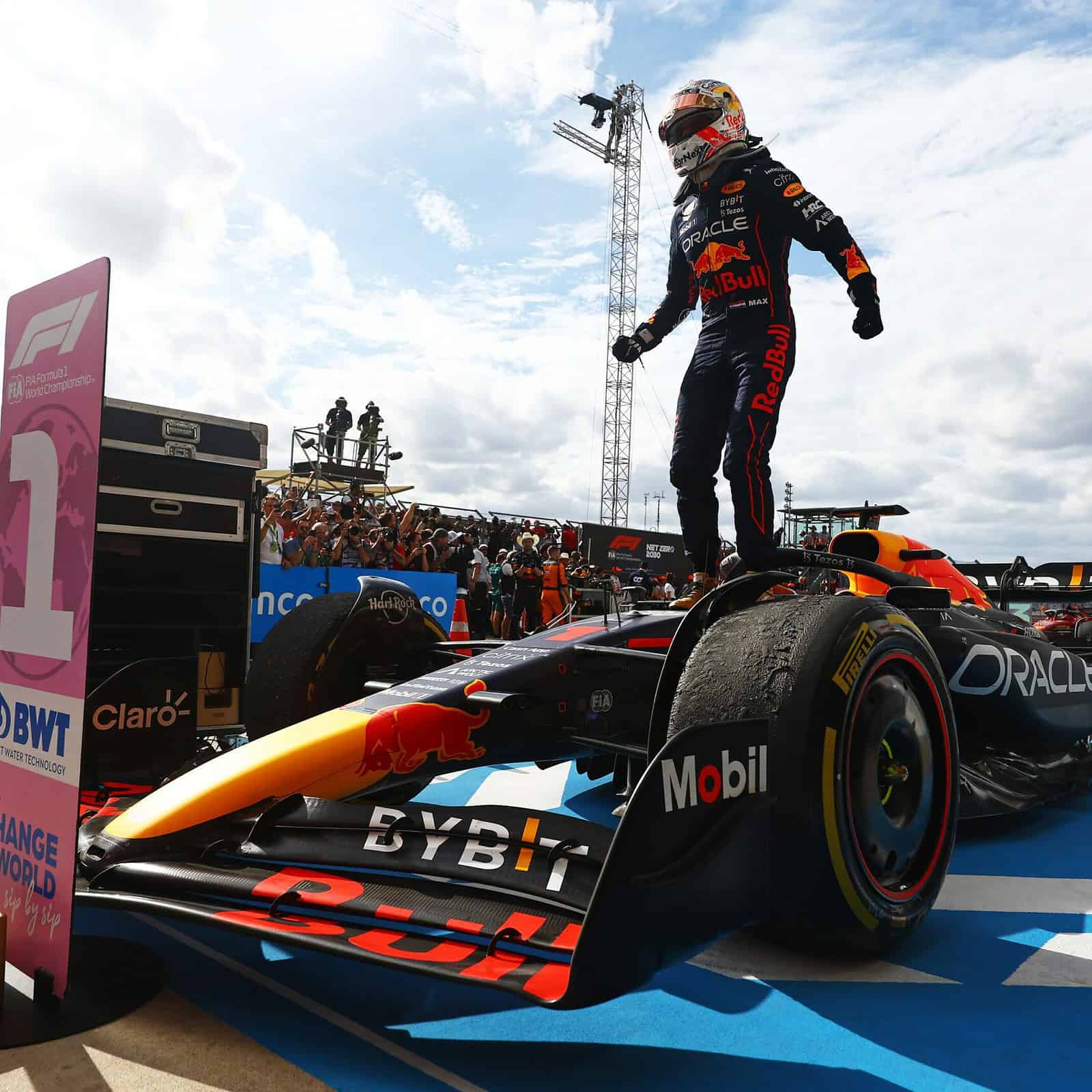 Max Verstappen continued his ridiculous season by earning his 13th win of 2022, tying the record held by Michael Schumacher and Sebastian Vettel for victories in a season.  With three races remaining, Verstappen has the potential to put the record out of reach after his win at the United States Grand Prix at Circuit of the Americas in Texas.  With his 33rd career win, and his teammate Sergio Perez earning fourth, Red Bull won their first constructorʻs championship since 2013.  The title comes one day after team patriarch and Red Bull founder Dietrich Mateschitz passed away on Saturday.  Christian Horner, team principal, acknowledged how meaningful the wins were for everyone involved with the team.

Lewis Hamilton, who has yet to win this year, scored his third second-place finish of the season in a bit of a surprise result.  Charles Leclerc finished the race on the third step of the podium, giving nine on the year.

George Russell followed Perez home, earning him a 16th finish of fifth or better this year, while Lando Norris finished where he started in sixth.  Fernando Alonso somehow managed to move up from his 14th-place starting position to cross the line in seventh even after Lance Stroll collided with him on lap 22, and Alonso caught air, skidded off track, and then bumped into the guardrails.

Vettel finished his final USGP in eighth in a ʻwhat could have beenʻ race.  He pitted from third and endured a terrible pit stop, sitting for almost 17 seconds, and returned to the track in 13th.  Kevin Magnussen held on in the second half of the race to finish in the points, his sixth time this year, and claim ninth.  Yuki Tsunoda grabbed the final points-paying position by taking 10th, only his fourth race with points in 2022.

Carlos Sainz spun his tires on the start and watched as his pole position advantage gave way to Verstappen, clearing him by turn 1.  Russell saw an opportunity to slide into third but instead punted Sainz, allowing Hamilton to move up to second.  The Aston Martins of Stroll and Vettel proved solid on the get away and by lap five they were holding their own in fifth and sixth, respectively.  Leclerc, who qualified second but started from 12th, put forth a steady effort of driving through the field, grabbing seventh by lap 8.  In a similar fashion, Perez showed better pace and made his way to fourth on the same lap.

Verstappen, however, found little challenge from the field, his Red Bull, too good; his talent, peak form.  By lap 10 he had worked to be nearly four seconds clear of Hamilton.  While Verstappen made things look easy, Lando Norris was pushing as best he could to maintain ninth as Valtteri Bottas hounded him, providing one of the better battles for position.  Sadly, on lap 18, Bottas lost the rear end of his Alfa Romeo and parked it in a gravel trap, ending his day and bringing out the safety car.  Leclerc benefitted from the Safety Car and jumped from seventh to fourth.

Just past the race’s midpoint, Verstappen suffered a slow pit stop that dropped him down in the running order and almost made it seem like Hamilton might find his way to win for the first time this year.  Verstappen soon cruised back into contention, with his pass on Leclerc being the barrier to running down Hamilton for the win.  With 10 laps to go, Hamilton held on to a two-second lead but Verstappenʻs pass for the lead looked all but certain and by lap 50 he again moved into first.

When you’re good, you’re good.  And Verstappen is apex good at this point.  There is little anyone can add in the way of adulations that would acknowledge how this year has been a dream story for the double world champion.  If you are not a fan of the Yankees, Patriots, Celtics, Red Wings, Hamilton or Jimmie Johnson, then you know how difficult it can be to watch one entity dominate a sport.  Verstappen is that monster at the moment and it can be hard to appreciate the brilliance, but when viewed in the context of history, he falls neatly and wonderfully in line.

Hamilton held the lead with 10 laps to go and even though Verstappenʻs pass seemed inevitable for the win there was reason to celebrate the seven-time champion.  Mercedes missed the mark with its car this year, delivering a product that performs out of step with what had been a slayer of the field for eight years.  Yet, even with a faulty tool at his disposal, Hamilton has tried to make it work.  To see him lead and attempt to hold off the exemplary Red Bull had more to do with his recognizable talent than anything else and is a reminder to enjoy what is a career with less years than months on it.

One of the notable rules in F1 is that drivers are allowed to make only one move when defending and then must accept the outcome.  Adhering to and policing this rule make up many of the stewardʻs decisions throughout the year.  Every driver is aware of this aspect. Stroll, however, feeling spirited with an Aston Martin that appeared competitive, forgot about the rule and drifted in front of Fernando Alonso and nearly created a calamitous moment.

Glad they are both okay. The incident between Alonso and Stroll. Alonso doing a wheelie #F1 #USGP pic.twitter.com/JfvNaSMJPR

That both drivers are healthy is once again a remarkable outcome owing to the safety of these cars.  That Stroll received a three-place grid drop penalty for the Mexican Grand Prix next weekend and two points added to his license.  Neither one of these measures seems to be enough.  For an incident such as this one, a more robust penalty feels like it should have been the case, even if making it a five-place grid drop and four license points.

Russell earned a mere five-second penalty for driving into the side of Sainz and ending Sainzʻs day.  The contact looked, initially, like it would be of little concern for Sainz, an easy recovery and then a charge up through the field.  Instead, what had been reported as a puncture became terminal, with a puncture to his radiator and an ensuing water leak, and Sainz found himself out of the car after starting from the pole.

The issue here is not so much the penalty, which is somewhat laughable.  The issue has more to do with Russell and just what he was thinking.

The damage to his car in the contact with Russell at Turn 1 has forced his retirement #USGP #F1 pic.twitter.com/k8wdBFsjhe

There was no opening and even if Sainz had lifted in an attempt to keep his position, there was still nowhere to go.  Russell has shown to be a rather considerate driver on the track but this move seems like a head-scratcher.  Russellʻs apology to Sainz after the race undoubtedly did little to make Sainz feel any better for his sixth DNF of the year.

Sometimes the people get it right.  The Driver of the Day recognition from F1, with voting coming from online sources, gave Vettel the nod for his recovery from 13th to grab eighth.  Vettel still shows some of the mettle and talent that earned him 53 wins and four championships, and while eighth may not appear to showcase that ability, it is very much a recognition of a wonderful driver stuck in a terrible car.

Max Verstappen put his win in perspective, offering, “It was not made easy for us but in the end, of course, extremely happy to win in this difficult weekend for us. I think this was actually a race that he [Mateschitz] would have loved to see.”

Carlos Sainz had every reason to be frustrated, stating, “There’s been so many races where I don’t even complete one lap, so that is also difficult to make a step forward on race days, which shows how frustrated I am and how my year has been because the speed is there, but it’s been just a very poor year in terms of luck and things happening,”

Fernando Alonso came across as unfazed later, saying, “It was scary in the car because when you are up in the air, anything can happen. When I saw that I landed on the track, I said, ‘Okay, I will retire the car now, and that’s it for today.’ But no, change tires, front wing – go!”