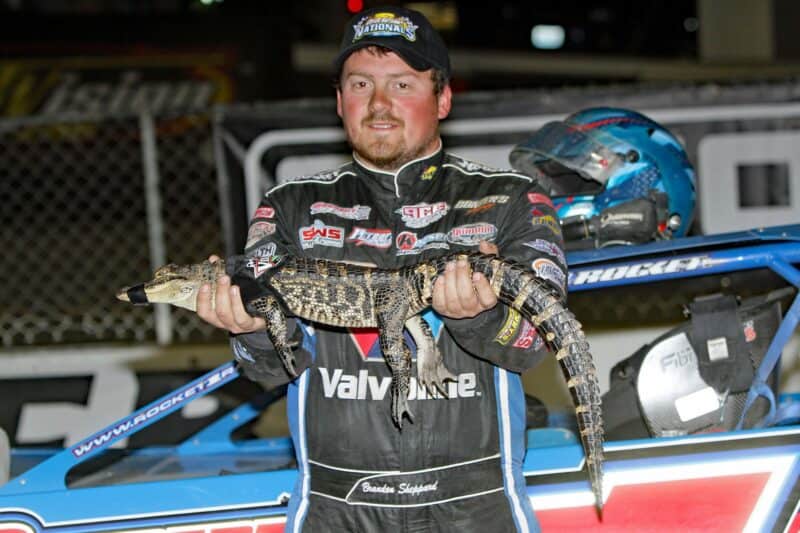 1. Don’t rush to conclusions about No. B5 team

Brandon Sheppard struggled to an 11th-place finish in Friday’s (Oct. 21) World of Outlaws late model race at Humboldt Speedway, his first race in the family-owned No. B5 since the end of the Lucas Oil Late Model Dirt Series season marked the end of his tenure as the driver of the Rocket Chassis house car.

It was a result that had Sheppard fielding caustic remarks about his decision to leave the Rocket team according to an interview with DirtonDirt’s Kyle McFadden. And it was thus framed as a kind of quick redemption that Sheppard rebounded then to win on the same WoO tour Saturday night at 81 Speedway.

.@B_Sheppard_B5 picked up where he left off the last time the World of Outlaws @CaseCE Late Model Series visited @81_speedway.

But just as Sheppard (through McFadden’s column) admonished critics for jumping to conclusions after Friday night’s struggles, the same can be said for drawing conclusions about Sheppard’s form at 81 Speedway. Why? Because Sheppard’s resume at said 81 Speedway is deep and frequent, with the Illinois driver having raced at the track every fall for years in the family-owned No. B5 modified as part of the United States Modified Touring Series Spooktacular every October. Translation: The Sheppard team had a deep notebook entering Saturday’s race, and to their credit, exploited it.

Frankly, there’s no conclusions to be drawn from the WoO late model Kansas swing. They’re not racing in late model country or are on tracks that are going to be a major fixture on any national tour in 2023.

One conclusion that can be drawn on the WoO late model tour is the 2022 champion, as longtime veteran Dennis Erb Jr. clinched the series title with a fourth-place finish Sunday night in Missouri.

What’s also notable about this title run for Erb is that it was done with a female crew chief for the entire 2022 campaign. Heather Lyne, who has been part of Erb’s crew for decades at this point, is to my knowledge the first female crew chief to win a national touring series championship in late model racing.

The most important takeaway from all of this? How much of a non-story this has been. From Danica Patrick to the ARCA Racing Series making news stories out of Rita Thomason and a crop of Instagrammers, asphalt racing’s desperation to make women competitors relevant whether they’re talented or not has done nothing to create sustainable and viable presence in the big leagues. Meanwhile, Lyne, who has been winning races as a crew chief for years on end, is treated like a race-winning crew chief and nothing more.

That’s how it should be.

Fresh off a huge $75,000 win in the National Open Saturday night, Pennsylvania Posse driver Lance Dewease and his race team are putting their money where the driver’s mouth is. After emphatically telling DirtVision in victory lane that he was nowhere near done driving and ready to keep young guns honest, the Pennsylvania fixture is reportedly entering the World Finals at Charlotte next weekend.

Good to see that National Open winner, Lance Dewease will be heading to @TheDirtTrack for the @World_Finals

Should this rumor pan out, it will mark the first trip to Charlotte and the Finals for Dewease since the 2014 season, and there’s no better campaign than to make the attempt. Non-Outlaw drivers have established more parity with tour regulars than at any point in recent memory in 2022, and it’ll surprise no one if the No. 69K car synonymous with Williams Grove finds its way out front in Concord.

4. The most controversial race of 2022 returns

The tire testing controversy that followed the season-opening Winter Dirt Games at Bubba Raceway Park for the USAC sanctioning body was easily the most cringeworthy situation dirt racing has found itself in this side of the droop rule.

On the positive side, it can’t go worse than it did this season, right?

5. To scratch or not to scratch?

It’s been a while since I’ve seen this come up watching a national touring race, but the WoO late models made a decision to scratch their B-main (err, last chance showdown) in favor of starting all 26 cars that attempted Sunday’s program at US-36 Speedway.

It may run completely contrary to the myriad of complaints I’ve made about racing programs taking forever in 2022, but I can’t help but frown at this practice. Not just from a perspective that canceling the B-main ultimately means a purchased race ticket sees fewer green-flag laps, but more so because making such a decision is ultimately open to potential abuse.

When do circumstances call for such a cancelation? Is 26 cars too few to justify a B-main? 27? 28? Is the weather too cold to justify the extra feature? Is the racing surface too abrasive? Are there not enough tires to justify another 10-12 laps?

Yes, canceling a B-main has benefits. It does expedite a racing program (in this case, we’re talking a Sunday night race where the majority of fans did have to go to work the next morning). It does remove wear and tear for what often is an academic exercise (if the field’s 26 cars, chances are the cars at the back of the field are there for a reason). And it also means that everyone that started the feature is getting paid start money.

Having said that, racing is a competition. And seeing the size of the starting lineup essentially get played with willy-nilly is a bit beneath this level of motorsport. Besides, if a car can’t finish better than second-to-last in a B-main, what business do they have starting a feature?

6. The beauty of chaos

For those that have forgotten what live pit stops at a dirt track look like now that ARCA has relegated them to the history books, The Lead Lap’s Corey Simmons captured some excellent video of pit stops at Sunday’s Eastern States 200 modified race at Orange County Fair Speedway in New York that offered a great look at what longer dirt races are now missing out on.

Chaotic and unpredictable? Yes. But what a breath of fresh air.