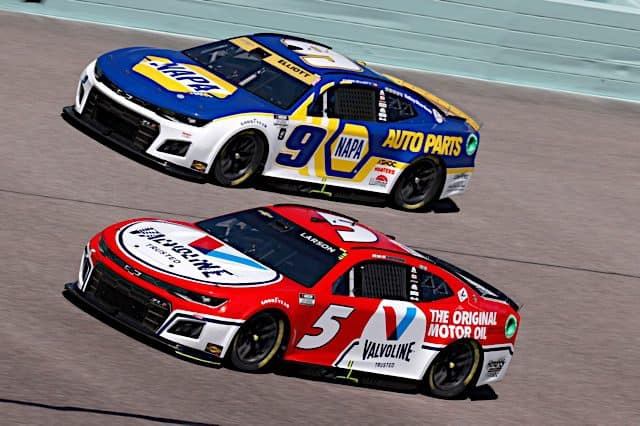 To make things simple, the owners’ title works in exactly the same way as the driver’s title does. It’s only because 2022 has been 2022 that NASCAR has found itself steaming toward a confusing mess of a finale.

Formula 1 fans will be familiar with the idea of the Constructors’ Championship – Red Bull Racing just locked up that title last Sunday (Oct. 23) at Circuit of the Americas. In F1, all the points scored by every driver racing for that team all season are added up, and the team with the most points wins the title (and the biggest share of prize money). The difference is NASCAR teams aren’t required to have two cars: Cup teams have as many as four and as few as one car. Instead, each “team” in the NASCAR owners’ championship is scored by the single car, with its single car number.

(For example, Hendrick Motorsports’ No. 5, No. 9, No. 24 and No. 48 teams all compete against each other, but both Alex Bowman and Noah Gragson have contributed points to the No. 48 team’s total.)

A.J. Allmendinger will drive the No. 16 car for Kaulig Racing in this weekend's NASCAR Cup Series race at Martinsville Speedway.

Noah Gragson will pilot the No. 48 car for Hendrick Motorsports as Alex Bowman aims to possibly return at Phoenix Raceway.

Plus, the owners’ championship has a playoffs, one that runs parallel to the drivers’ playoffs. In the elimination era, these results have always been the same. This year will be the first they differ, for one reason: Kurt Busch’s concussion.

Although Busch gave up his playoff waiver, the No. 45 car still qualified for the owners’ playoffs based on Busch’s win at Kansas Speedway this spring (and Ty Gibbs stepping in to drive the No. 45 in the remaining races). Then, 23XI Racing made the unusual decision to swap Gibbs for Bubba Wallace in the No. 45, tying the No. 45’s owners’ playoff fortunes (and potential for higher prize money) to Wallace.

NEWS: @BubbaWallace will run the @23XIRacing No. 45 car for the remainder of the season in pursuit of an owners' championship. pic.twitter.com/Y2mpmDHHqn

Then he also won at Kansas, sending the No. 45 through to the Round of 12, despite the fact Wallace had been eliminated from the drivers’ playoffs after the regular-season finale at Daytona International Speedway.

So the No. 45 (Busch/Gibbs/Wallace) was an owners’ playoff car right up until being eliminated at the end of the Round of 12. Now, the team falls into the limbo that is the fifth-to-16th-place pool, with its final position within that group determined by full points scored over the course of the playoffs.

An aside: after Wallace’s suspension, John Hunter Nemechek became the fourth different driver to score owners’ points for the No. 45 car in 2022. I doubt Denny Hamlin and Michael Jordan expected that in February.

But how do Blaney and Larson fit into this whole deal?

Well, by the time the checkered flag fell at Daytona, 16 different car numbers (including Busch’s) had won races during the regular season. Busch refused a waiver, dropping him out of contention and letting a winless Ryan Blaney steal the last playoff spot in the drivers’ playoffs only.

In effect, this meant that as long as Blaney’s championship hopes were alive, someone eliminated from the drivers’ title would still have a shot at the owners’. Whenever the broadcast showed the points standings, draw an imaginary line through Blaney’s name, add the No. 45 car, and adjust the cut line accordingly.

So when Blaney qualified for the Round of 8 and the No. 45 was eliminated at the end of the Bank of America ROVAL 400, Larson slipped through the crack. Then, with his win at Homestead-Miami Speedway, he locked up a spot in the owners’ Championship 4 for car No. 5 … even if Larson himself isn’t behind the wheel come Phoenix Raceway.

At this point, I need to draw it out:

Basically, the owners’ championship works on the exact same point system, eliminations and all, of the playoffs you’re used to. It’s just because of 2022’s weirdness that it’s a slightly different cast of characters.

See also
5 Points to Ponder: The 2022 Cup Series Champion Will be Decided by Talent, Luck ... and Off-Track Rulings

Well, like I just said, Logano is already locked in, so that’s one down. Easy. Who’s next?

After Miami, Ross Chastain sits 19 points ahead of the cut line on the strength of two runner-up results. Maybe an unexpected trait from a driver who’s become known for aggression, but the No. 1 has been quietly settling for second-place points, and that could be key to helping him move along – but just 19 points? That’s barely a buffer. One wrong move, mechanical failure or retaliation and the world’s fastest watermelon farmer will be knocked out.

Chase Elliott and William Byron absolutely dominated the spring race at Martinsville Speedway this year, with Elliott claiming both stages and Byron taking the checkered flag. Sitting 11 and five points clear of elimination, respectively, they have even less of a buffer than Chastain.

To my eyes, all that means is that this round will come down to their performances in the final race, and there is nobody I feel more confident picking at Martinsville than these two.

Retweet to congratulate William Byron on his win at Martinsville! pic.twitter.com/bAIq7bws05

Except, well … Virginia native Hamlin (5 points back of Byron) is one of the masters of Martinsville. He’s won five times at the half-mile short track and tends to find his way toward the front no matter what track when elimination is on the line. But Hamlin hasn’t earned himself a grandfather clock since 2015, and Toyota’s short-track program has been lacking all season.

That didn’t stop him from winning at Richmond Raceway amidst his early-season struggles, so while I’m not going to write his name in permanent marker, it wouldn’t be a surprise to see Hamlin leave his home state with a shot at the title.

Blaney is 18 points back of the cut line and probably the last driver who can point his way in without needing his rivals to suffer a lot of misfortune.

But will he? I don’t think so. Despite only missing the top five once between 2018-20, and a fourth-place run there in the spring, Blaney has never put in the kind of decisive performance at Martinsville that Hamlin, Elliott and Byron have shown themselves capable of. Were he starting 19 points ahead of the cut line instead of behind, and were his rivals less known for their dominance of the Paperclip, I’d be singing a different tune. But I think hopes for a bracket-breaking winless Blaney title will come to an end in Martinsville.

Christopher Bell and Chase Briscoe, the biggest surprises of the Charlotte Motor Speedway ROVAL, will almost certainly need to win their way into the next round. While both drivers can point to Round of 8 berths as evidence of starting to deliver on some of their massive potential, the fact they don’t drive cars with golden bow ties on the front mean they’re facing a difficult uphill battle at this weekend’s short track. Having to recover from problems faced across the first two rounds, either will probably have to win to advance, something I just don’t see happening.

Then again, two rough opening races plus one track ill-suited to his Toyota was all Bell needed to stave off elimination at the ROVAL. Time will tell if he can deliver a second miracle to the No. 20 team.

My final picks? Logano, Byron, Elliott and Hamlin. I predict Elliott finally pays Chastain back for St. Louis, allowing Byron to win and Hamlin to scrounge up just the points he needs to go through to Phoenix.

Isn’t it great how Brian simplified the POINTS system because the Latford system was too hard for the fans to understand?

Kevin in SoCal
Reply to  DoninAjax

It is pretty simple, one point per position. Fans are just confused because of Kurt Busch not running for the driver’s championship.

DoninAjax
Reply to  Kevin in SoCal

What about the POINTS for the TV time outs and all the extra POINTS that carry on for the 9 elimination events?

I think you are foolish to think that Elliott is going to be secure enough to worry about paybacks, it’s going to take all his concentration to make the final four. Now if Elliott has a problem early in the race that pretty much ruins his chance of making the final four, then perhaps.

I agree with you. Payback will be the furthest thing from his mind, especially here and now. I don’t think Chase would take out a contender in the next two races, not his character. But Hamlin would for sure.

Hamlin is in even worse shape. I can’t stand the guy but I’ve never thought he was an idiot. His chances are running out career-wise and he’s below the cut line. If anything but winning the race is on his mind, then he would have to be an idiot.
I don’t think anyone is going to take anyone out in the next two races. That doesn’t mean they won’t make it hard for you to pass them if they get the opportunity. The whole vendetta thing is really being over discussed. It happens but it’s rare that it’s as obvious and immediate as Bubba (or Kenseth’s in 2015). Paybacks are often much more subtle.