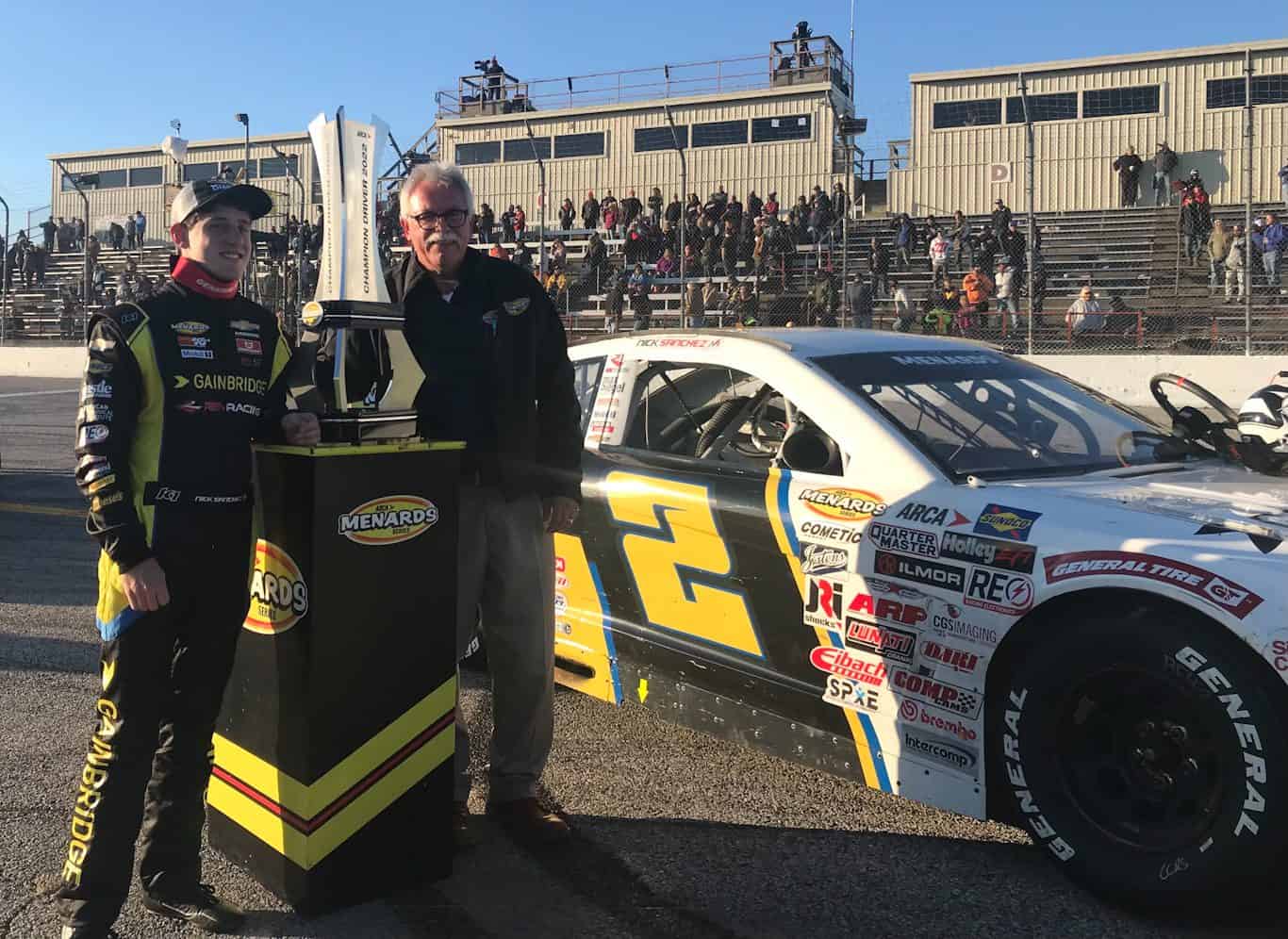 When Nick Sanchez captured the 2022 ARCA Menards Series driver’s championship in the season finale at Toledo Speedway on Oct. 8, the garage turned its eyes to 2023. Although the 2023 schedule has not been released, which drivers will pair with which teams for next season?

It is highly probable the top four drivers in the championship standings all will graduate to the NASCAR national series in 2023. Champion Sanchez told Frontstretch that he will drive a “Very, very, fast Chevrolet vehicle,” in 2023. Runner-up Daniel Dye has been promoted to a full-time NASCAR Camping World Truck Series ride with GMS Racing.

Rajah Caruth told Racing America editor-in-chief Matt Weaver that his 2023 plans have him “Really excited. Hopefully, it’ll work out.” And Sammy Smith, who led ARCA with victories in 2022, is viewed as a favorite to land a NASCAR Xfinity Series ride with Joe Gibbs Racing.

See also
What We Know About The 2023 ARCA Schedule

Fifth in the standings in 2022, Greg Van Alst will return full-time to ARCA in 2023. Van Alst scored one top-five finish with a fifth-place result at Charlotte Motor Speedway, and 11 top 10s in 2022.

Brad Smith earned his second ARCA career top 10 at Berlin Raceway in 2022, and he piloted his No. 48 to an eighth-place points finish. Smith made his 400th career ARCA start in 2022 too, and he’ll continue piling up starts as he too is returning full-time in 2023.

During the Toledo race weekend, Venturini Motorsports team co-owner Billy Venturini told sports reporter Casey Campbell that the team will likely look very similar to its 2022 driver lineup as well as the team will have three full-time entries and a fourth part-time entry.

Jesse Love and Landon Pembelton are the favorites to run full-time for Venturini in 2023.

Love “is going to be an amazing talent. I think he’s going to be tough to beat next year,” Venturini told Campbell. Love is a two-time ARCA Menards Series West champion. In his main ARCA career, Love has two wins, including one in 2022, eight top fives and 12 top 10s. Even though Love has only run a part-time main ARCA slate, he has finished 10th and eighth in the 2021 and 2022 standings, respectively.

Pembelton has a high ceiling in terms of his raw talent, according to Venturini. He burst forth onto the stock car scene with his 2021 late model victory at Martinsville Speedway. The Virginian competed three times in ARCA in 2022. Pembelton finished an impressive third, sixth, and seventh, respectively, with his podium finish in his series debut at Elko Speedway.

Pembelton confirmed to Frontstretch that Venturini made him an offer for a 2023 full-time ride, though Pembelton stated he is working diligently on his 2023 racing plans.

The lone 2022 Venturini full-time driver Toni Breidinger finished sixth in the standings on the strength of six top 10s. Breidinger is likely to return to the team too, sources tell Frontstretch, though whether she will return to the organization full-time is unknown.

Two drivers who will likely figure into the Venturini rotation in part-time capacities are Conner Jones and Parker Chase. Jones will turn 17 on Feb. 22, 2023, so he cannot run the full schedule. Jones joined Venturini for his 2022 ARCA participation. He logged one top five and two top 10s in four starts, setting his ARCA career-best finish of fifth at Iowa Speedway.

Canadian Amber Balcaen debuted in 2022 with seventh-place points finish. She earned her career-best finish of seventh place at Charlotte Motor Speedway, one of her six top 10s. Her Rette Jones Racing team owner Mark Rette told Campbell that he feels like things are heading in the right direction for Balcaen to return full-time piloting the No. 30 Ford.

Gray is in a predicament though. He will not turn 18 until March 25, so he will miss the ARCA season opener at Daytona. In addition to not accruing points there, Gray will miss the 50-point bonus for not competing in the first five ARCA events.

Gray’s team David Gilliland Racing is rumored to switch manufacturers to Toyota. That switch will not affect Gray’s ARCA campaign though.

“Yes, we will still be participating in ARCA in some fashion, and you can expect Taylor to run the larger tracks once he is 18 to get the experience and laps,” a team spokesperson told Frontstretch.

Because Gray would only miss Daytona, it would be beneficial for the team, for both owners’ points and financial reasons, to field an ARCA racecar at Daytona. Sources have indicated the team is looking for a driver for the Floridian race, which will likely be a Toyota-affiliated driver such as Breidinger.

Mandy Chick’s foray into her ARCA competition did not yield any top 10s, but she plans to run the full 2023 ARCA schedule for her family-owned team.

“Our plan is to run the full season,” Chick told Southern Race Week SRW Podcast. “That’s our big goal is to be consistent in this series and run the full season and get a lot of experience at a whole bunch of new tracks to put that in our toolbox and build on that. We have a lot of pieces that need to go together for that next year, so we’re currently working on that. We’ve got a car at the body shop down in North Carolina right now […] and so we’ve got a lot of moving pieces within our team.”

Christian Rose wound up seventh in the East standings and he also scored one top 10 in eight main series starts. Rose will be back in some ARCA competition in 2023, though whether he will run full-time in either the East or main series is unknown at this time.

Rita Thomason debuted in ARCA in 2022 and then she joined newcomer Tim Goulet Enterprises. Expect her back in the No. 31 as team owner Tim Goulet told Frontstretch, “In the 2023 ARCA racing season, Rita will be piloting the No. 31 in all races she is approved for. No further team details will be provided at this time but stay tuned!”

Thomason is in the process of moving to North Carolina with her racecar currently at Mike Harmon Racing’s shop. Per sources, Thomason will likely run at racetracks less than 1.25-miles and the road courses. Sources indicate the team would also like to run full-time with funded drivers.

Thomason began her ARCA career driving for Clubb Racing Inc. Team owner Alex Clubb told Frontstretch his team is building for 2023, including acquiring a speedway racecar. Clubb himself finished 13th in the standings and the team finished 14th in the owners’ standings. If the team cannot secure further sponsorship or a funded driver, the team might be forced to scale back to part-time status.

Andy Jankowiak will reprise his part-time ARCA schedule, telling Frontstretch, “Likely the same [as 2022] with the addition of a few depending on how things go. Want to do Michigan [International Speedway]. Spring Kansas [Raceway] is also a plan.”

Both Katie Hettinger and Matthew Gould debuted in the ARCA-sanctioned series in 2022. It is highly likely both will chase the East title, sources indicate. Hettinger made her West debut with Young’s Motorsports and Gould ran for Niece Motorsports, and both are likely to reprise their roles with those teams.

In 2022, Sanchez became the 15th straight different ARCA champion. 2023 will likely bring a new champion, and the ARCA field is slowly coming together for the new season ahead.

I hope West Virginia Taxpayers aren’t footing the bill on an ARCA Rent-A-Ride disaster again. What a waste and embarrassment.