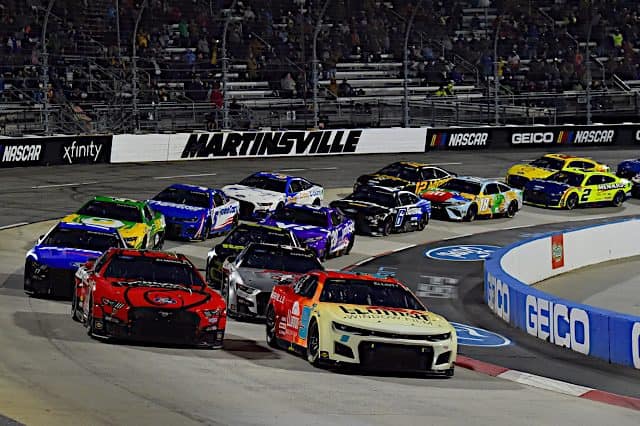 This weekend, NASCAR Cup Series drivers look to bring home a grandfather clock and secure their spot in the Championship 4. See which drivers you should consider for your daily fantasy NASCAR DraftKings lineups for the Xfinity 500 at Martinsville Speedway, airing Sunday, Oct. 30 at 2 p.m. ET on NBC.

It’s the second time this season the series has visited this paperclip-shaped oval but the first time during the day. Last time out, William Byron and Chase Elliott dominated a largely mundane night race, with Byron scoring the victory. Since temperatures are much warmer this weekend, there’s hope the racing quality improves.

However, we should still see at least one or two drivers stay out front in clean air, so you’ll want to have top qualifiers in your DraftKings lineup. Then, fill the rest of your roster with those who have good finishes at both Martinsville and the other short tracks this year. Of course, it doesn’t hurt to see how drivers have performed during the last few weeks of the playoffs, too.

Lastly, take a look at practice more than usual before qualifying (Saturday, Oct. 29 at 12 p.m. ET, streaming on NBC Sports App and airing on USA Network at 12:30 p.m.). Since the racetrack is only 0.526 miles, cars should make several consecutive laps in practice (if there’s no incidents). Average lap times should help decipher the fastest drivers over the course of a long run; remember, there were just four caution flags here back in April.

Before I move on to my picks for Martinsville, here’s a look back at Homestead-Miami Speedway:

My roster was sunk with Tyler Reddick crashing out. Erik Jones and Cole Custer also didn’t perform as expected, so I ended up with a very low score. Having a dominant Kyle Larson in there would have helped.

You may be wondering why I’m rostering Elliott, seeing that he has just two top fives in the last nine races. Well, he’s coming to a track where he led 185 laps in the spring before crossing the line in 10th. He’s been dominant in the last several races at the Paperclip, with a win in fall 2020 and a combined 710 laps led in his last four starts at Martinsville.

Also, Elliott’s driven the No. 9 Chevrolet of Hendrick Motorsports to some good finishes at the shorter tracks this season. He gained 21 positions at Bristol Motor Speedway to finish second in September and 18 spots at Richmond Raceway to finish fifth during the summer. Plus, he was second at New Hampshire Motor Speedway in July after recording 30 fastest laps.

Elliott should be popular on DraftKings on Sunday, since he has such a good track record out at Martinsville. Hopefully, his racecar will have speed during practice, because otherwise it might be hard for him to make up ground if he starts back in the 20s.

Yes, I know Joey Logano didn’t work out last week like I thought he would. However, his Martinsville track record is so good, I couldn’t resist playing him, especially since his salary is $10,000. Logano’s earned six consecutive top 10s at this place, including his runner-up finish there in the spring. In the last nine Martinsville events, he has four top fives and eight top 10s. He won the fall 2018 race and led 234 laps in the spring 2020 event before coming home fourth.

The No. 22 Team Penske driver, who locked himself into the Championship 4 with a win at Las Vegas Motor Speedway, has some good results at short tracks this year. In particular, Logano was out front at Richmond in August for 222 circuits on the way to a sixth-place finish. Also, he’s earned two more top fives on intermediate tracks recently: a second at Texas Motor Speedway and a fourth in the Southern 500 at Darlington Raceway.

Logano may just be more conservative this week since he’s already racing for the championship, or he may decide to go all out for the win. Be sure to check out his practice speeds, though, as you may want to switch to another top driver if the No. 22 has mid-pack speed.

Austin Dillon has a little bit higher salary than I would have liked on DraftKings, but he’s still one I’m considering this week. One of the main reasons is because he’s earned three straight top-10 finishes: 10th at both the Charlotte Motor Speedway ROVAL and Las Vegas, then a fourth last week at Homestead. Granted, those three are very different racetracks, but the momentum can still translate as the season comes to a close.

At Martinsville, Dillon has finished well recently, earning top 15s in the last three events. He drove from 23rd to third earlier this year, while last season, he placed 14th and 13th in the spring and fall races, respectively.

If Dillon has the same speed he had in the spring, he should earn another solid finish if he stays out of trouble. If you’d rather pivot, AJ Allmendinger also has momentum, earning top 10s in each of his last six Cup races driving Kaulig Racing’s No. 16.

Brad Keselowski has shown some strength at the shorter racetracks this year, which is why I’m rostering him on DraftKings. Though he finished 17th at Martinsville in the spring, he was seventh at Loudon and Darlington’s Southern 500. He also led 109 laps at Bristol before having a flat tire under green and winding up 13th.

Keselowski’s historical track stats may not be as relevant since he’s driving for RFK Racing now. Still, he’s proven that he can adapt in the No. 6 to tracks where he typically runs well at (like New Hampshire and Bristol), so you can still take a look at his Martinsville results. Spoiler alert: they’re good. Some notable runs were a third place last fall and a victory in spring 2019; Keselowski led a whopping 446 laps in that event.

Sometimes, a team stack can benefit your lineup, and at a sub-$7,000 salary, I wanted to stack RFK this week. Like Keselowski, Chris Buescher also led several laps at Bristol — 169, to be exact — and ended up bringing home the win. At Richmond in August, he finished in third place.

Unfortunately, Buescher started the spring Martinsville race in fourth and fell back to 15th by race’s end. But last year, he placed 13th and ninth in the spring and fall, respectively. He also has a history here of qualifying in the top 15, important for what’s expected to be a track position race.

If he doesn’t qualify near the front, though, Buescher will be even more appealing to me. His car doesn’t usually perform well enough to lead laps, but if he can gain positions on the track, that will boost his DraftKings score.

What a drop in salary from last week! Erik Jones’ price went down $1,200 after his 30th-place finish at Homestead. I had to have him in my lineup this week, especially since he’s still earned three top 10s in the past five races. He also won at Darlington in September after leading 23 laps.

Perhaps the Petty GMS Motorsports driver and his team can execute throughout the 500-lap race to get him near the front at the end once again. This spring at Martinsville, Jones advanced 11 positions to bring home a 13th-place finish. Prior to that, he gained 20 spots en route to eighth last fall. In fall 2020, he started 19th and came home 12th.

You need those position differential fantasy points to help you win your DraftKings contests. Expect Jones to provide them.