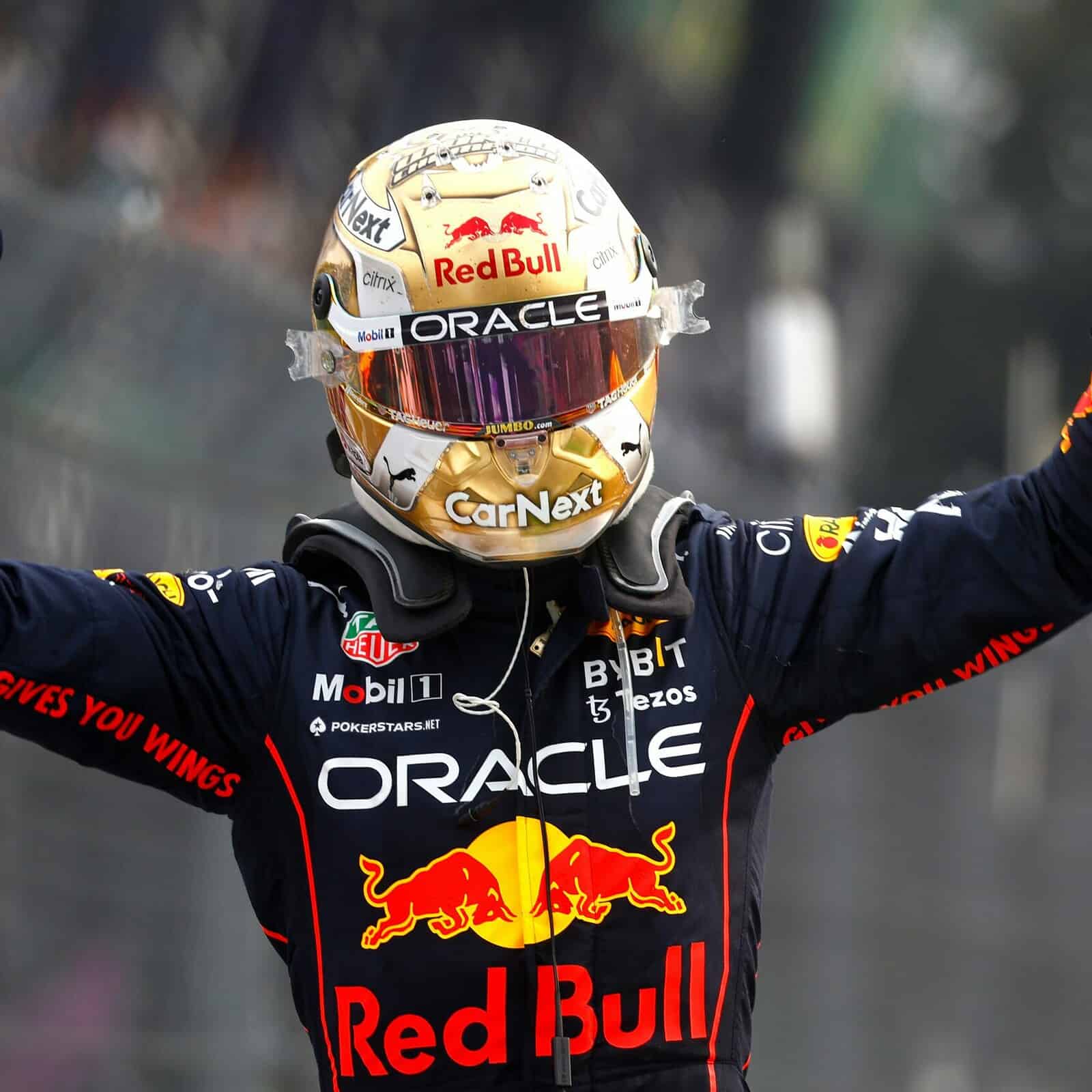 Chalk another win up to Max Verstappen.  Already crowned world champion two races ago in Japan, Verstappen added to his season’s win total at the Mexican Grand Prix, notching his 14th win of the year and 34th of his Formula One career.  With the victory, he set a new season win record for F1.

Lewis Hamilton did what he could but neither his car nor the Mercedes strategy provided much of a challenge to Verstappen, who is making the wins look commonplace, easy, almost a foregone conclusion from the start.

Sergio Perez gave Mexican fans, frequently yelling Vamos Checo, a solid result by taking third after starting fourth.  George Russell started the day in second but found himself bested by Hamilton and Perez at the start and held on to take fourth.

The Ferraris of Carlos Sainz and Charles Leclerc earned the fifth and sixth positions.  Daniel Ricciardo ended as the surprise of the day, taking seventh, although not without incident.  Esteban Ocon somehow had a quiet day and wound up in eighth place.

Lando Norris suffered through a bit of a rough start, dropping a couple positions, and could never quite rebound, winding up ninth. Valtteri Bottas earned the final points-paying position by slotting in 10th after starting sixth.

Verstappen led the field into turn 1 with a strong getaway while the two Mercedes drivers seemed fit to push each other to the limit with Hamilton prevailing.  Russell slid into third but soon became fodder for Perez as he worked into that position.  The rest of the field shuffled a few spots, but no one made a striking move that dramatically shook up the running order.

With the lead in hand, Verstappen began managing the race, holding Hamilton at a teasing distance for the first 20 laps. The gap between the two stayed steady, around two seconds, before the Dutchman slowly started pulling away.  Over the course of 71 circuits, Verstappen methodically pushed forward, grabbing time in small chunks so that when he crossed the finish line, the gap to Hamilton had expanded to over 15 seconds.

Much of the race passed by like a processional.  David Croft, in calling the event, around lap 50 said something like this Grand Prix felt like a race where we are waiting for something to happen – only nothing has.  His astute observation offered a reminder that not every GP brings an intense amount of drama. Even a late safety car for Fernando Alonso falling out of the race failed to ignite the competition.

There was only one caution and it was a virtual safety car.

Everyone finished the race healthy.

No one had any strategy that would surprise and steal positions.  Instead, the race seemed to be one where once the field was settled after the first 10 laps, no one thought to do anything risky.  On a track where passing has been historically difficult, grabbing spots through creative pit and tire strategy is an easy way to shake up things.  Teams showed, instead, that they were timid and did not want to make a wrong decision, losing vital points in the process as the season nears its completion.

No one was going to best Verstappen today but even a team like Ferrari could have done better to challenge Mercedes through an altered strategy.  Incredibly, they have left only a 40-point cushion in the constructorʻs standings with two races to go, meaning Mercedes has a somewhat realistic shot at pulling into second at Abu Dhabi.  While it still may be unlikely, Ferrari’s moves were but one example of a sense of late-season brain fade; teams might just be ready to be done with what has been the longest F1 schedule ever.

The Mexico stop on the tour is one of the most enjoyable for a number of reasons.  The visuals that surround the event, coming around Halloween, offer a unique festive environment.  The track that snakes through a forgotten baseball field provides a coliseum setting for a set of turns that is wildly original.  The altitude at which the track sits also provides a different challenge for both drivers and engineers, especially as engine allotment has become so precious by this time in the season.

What a show you always put on! 🙌

The unfortunate element of the Autódromo Hermanos Rodríguez comes in the realization that the racing has not been very compelling.  When racing Monaco, drivers and fans are well aware that overtaking is nearly impossible and that the position stolen at the start will likely be the finishing spot.  In Mexico, the track gives the impression that it offers overtaking zones galore but it is a bait that never offers the hopeful result.

Even when the Sky Sports emcees prattle on about tire differential, closing speed and strategy that should make for a dramatic finish, the truth is these words do more to keep viewership than the reality of a close battle to the line.  To bring changes would require some massive overhaul to the track and that is not in the offing at this time. However, further and continued scrutiny of the racing is something that might help bring that possibility to the forefront.

Where has this version of Daniel Ricciardo been?  Ricciardo may have grabbed fifth at Singapore, which feels pretty recent, but the aggression and determination that he showed in Mexico is what has been missing for much of the year.  In fact, not since Australia, the third race of the season, has he put together such a forceful drive – especially noting the difficulty in passing at the Mexican track.

Tsunoda gets squeezed by Ricciardo and bounced out of the race 💥😮#MexicoGP #F1 pic.twitter.com/uw8xRTrLFk

Even with his 10-second penalty for knocking Yuki Tsunoda from the GP, Ricciardo still managed to hold on to his spot.  His future is unknown at this point, meaning the Australian likely will not be in F1 next year, but a race such as this one will do well to keep his name ready should an opening arrive.

Max Verstappen in discussing his race win was sure to acknowledge the environment at the Mexican GP, saying, “I mean, they put on a great show, the atmosphere, in general, is incredible with the fans, they are super passionate about Formula 1 – but of course about Checo – but it also helps a lot that you have that whole stadium. It makes it look incredible. It’s a great atmosphere.”

Meanwhile, Daniel Ricciardo seemed perplexed with himself and his McLaren after finishing seventh. “It’s so nice,” Ricciardo said. “I wish there was an explanation why it hasn’t been like this more often, races where I can just lean on the car and kind of put it where I want.”

Note: Russell scored an additional point for setting the fastest lap of the race. Ricciardo received a 10-second time penalty for causing a collision.