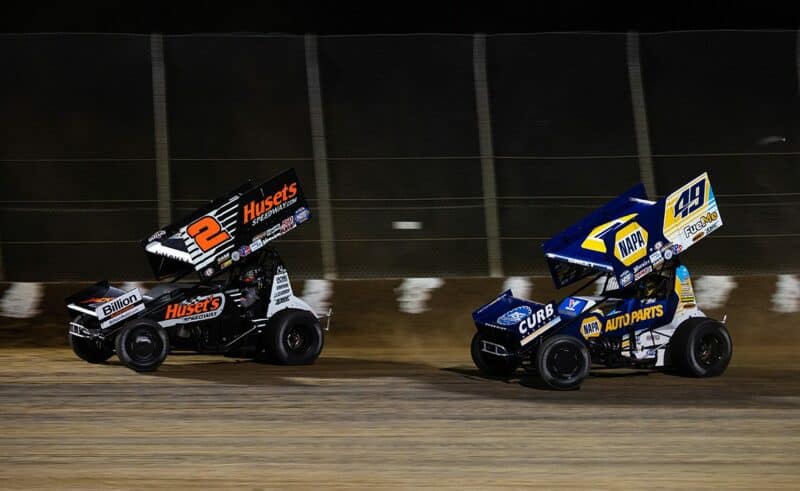 ONE: World Finals Has a Title on the Line

There might be a 16-point difference between @BradSweet49 and @DavidGravel entering @World_Finals, but Sweet views the title fight as being tied.

Sweet, who saw a season-long streak without a DNF end at Williams Grove in the series’ last race, would seem to be the favorite entering the Finals, given he’s won three straight titles and suffered his DNF at the Grove courtesy of a mechanical failure. But Gravel is easily the best qualifier in the series and on a big track like Charlotte, that’s likely to play into his hands as far as garnering track position early. Gravel ended 2021 on a red-hot streak and is completely capable of winning multiple races at Charlotte.

Buckle up folks, this one is coming down to the wire. No “playoffs” needed.

With late model silly season in full effect, Tanner English’s Facebook page was forced to put out a lengthy explanation of how the driver will contest the Gateway Dirt Nationals as scheduled, though his new home at Viper Motorsports had been slated to contest the XR event at All-Tech Raceway in Florida the same weekend.

The bigger takeaway I had from the driver’s social media was looking forward to 2023, where the team announced not just that they’d contest the World of Outlaws full time, but also planned to contest the full XR Super Series schedule as well.

Translation: the XR schedule is expected not to conflict with the World of Outlaws tour. And from there it’s a reasonable leap that the tour won’t conflict with the Lucas Oil Late Model Dirt Series tour either.

Five Mile Point Speedway ran what is expected to be their final race ever after 70-plus years of operation Saturday night (for more on that story, stay tuned to Frontstretch this Friday). As a result, it’s not surprising that Afton Motorsports Park announced Monday that as of Saturday night, the track will move to racing Saturday nights after running Fridays in 2022.

With the track only 30 minutes away from the now-defunct Five Mile Point, this move is a no-brainer. Saturday night races mean competitors aren’t rushing to get to the track after work and race fans aren’t debating whether the long work week drained too much out of them to make a Friday night trek out to the track. And with Afton’s classes largely paralleling the racecars that previously ran at FMP, it seems obvious the track is making a play to scoop up new racers for 2023.

As said it is/was to see FMP go, at least it seems the track’s racers will be able to keep racing if they so choose.

Brandon Sheppard’s move to his family-owned race team full-time in 2023 has already gotten plenty of ink in this column, but to get a further appreciation of just how big a move this is for the multi-time World of Outlaws late model champion, let the pictures speak for themselves.

Dirt late model racing it seems is not immune to an arms race.

In addition to tackling a construction project of their own, Pennsylvania’s Lincoln Speedway continues forward with an aggressively new 2023 schedule. Already having expanded their trademark Icebreaker season opener into a two-day event, the track has now announced that March will see the northeast center-drive modifieds return to the track for the first time in nearly a decade.

📅It's never too early to mark your calendars for something this exciting!

While I questioned the wisdom of the two-day Icebreaker, this is a move I’ll embrace with arms wide open, and not just because Lincoln is probably the easiest drive I’ll have all year to see the ugly but racy modifieds, but because it’s a good thing to see a successful racetrack not resting on its laurels and trying something new. Diversity in schedules is a very good thing.

Being right smack in the flight path of Philadelphia’s airport, Bridgeport Speedway has been quoted as having “a fly-over every 20 minutes.” Why Mike Thompson was trying to add to that tally is unknown, though the driver fortunately walked away from after landing.