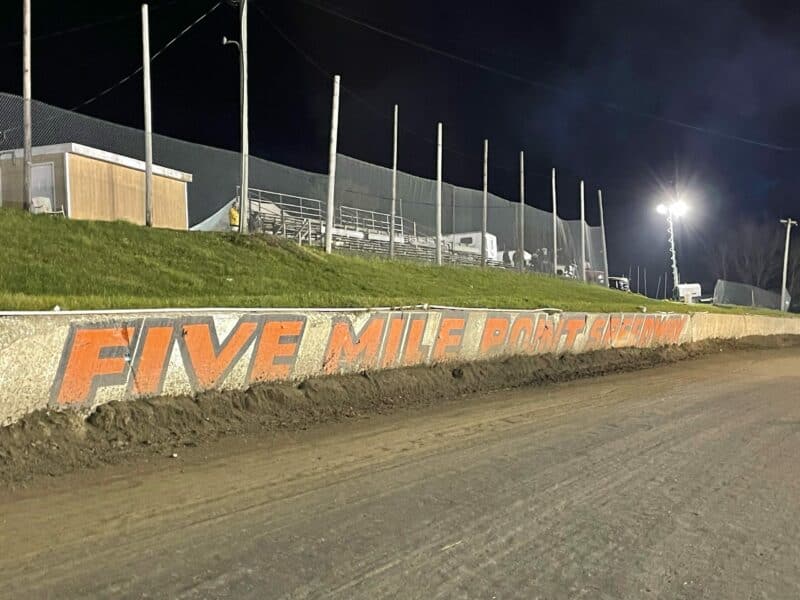 KIRKWOOD, N.Y. – The drive up I-81 Saturday (Oct. 29) was full of fall colors, foliage going dormant until spring would bring a return to green conditions.

But unlike all the natural beauty to be seen in the Southern Tier of New York this weekend, Five Mile Point Speedway will not be returning to green in 2023, with last weekend’s Southern Tier 72 modified race ending 72 years of racing on the dirt quarter-mile.

A property visibly surrounded by warehouses and development, the track has been sold for development, with an announcement on the track’s website advertising a November sale of the track’s equipment.

But just as it was a season ago when I attended the Final Race at Oglethorpe Speedway Park in Georgia, my first hours on-site at Five Mile Point were not marked by urgency or anything else that would distinguish this Saturday from any other race day. Perhaps the only detail worth noting as the track crew ran pack laps and crews parked and unloaded trailers was seen at the concessions stand, where seemingly every patron stepped away from the counter toward the backstretch fence, taking a glance or three before biting into whatever they bought.

Saturday’s (Oct. 29) program started nearly 15 minutes ahead of schedule, with competitive racing going green in the afternoon with the sun still shining. Ironically, the first division to hit the track on this final race day was dubbed the Futures class, with youngsters and inexperienced drivers seeking to move into modified racing as the first to contest the bullring.

It was a beautiful day at Five Mile Point Speedway Final Race day ever after 72 years of racing pic.twitter.com/PeF378icjd

If there’s any silver lining to the closing of Five Mile Point, it’s that there are plenty of places for displaced racers to keep turning laps next season. Penn Can Speedway is literally only 20 minutes away from Kirkwood, running regular Friday night races. Also this week, Afton Motorsports Park, 30 minutes removed from Five Mile Point, voted to move to a Saturday racing schedule for 2023. With both tracks regularly running classes similar to Five Mile Point, including the headline modifieds, racing isn’t saying goodbye to the region.

But while it was great to see the future literally on the track, that doesn’t change the fact that Saturday marked the end of a great deal of racing history. Built in 1951, Five Mile Point was host to no shortage of big names and big races. Saturday’s Southern Tier 72 recognized modified great Chuck Auklis, the track’s all-time winningest modified driver who scored a whopping 14 track championships during his career.

The track was no stranger to big-tier racing as well, having hosted the predecessor of the Super DIRTcar Series as well as the World of Outlaws and USAC national open-wheel competition. Current NASCAR Camping World Truck Series regular Stewart Friesen won the track’s Heath Memorial race in 2007 and 2010.

Those days have been long behind the track, though, with no major touring series making recent visits. In fact, the track had been carrying on a unique schedule seldom seen anywhere in the country, with separate spring, summer and fall campaigns running separate points tallies.

It can be argued whether being on the national touring circuit is a measure of the best days of a track, but in walking the entirety of the Five Mile Point campus before racing action got going on Saturday, I would go as far as to say the best days of the track were indeed in the rearview mirror. For as special and somber a day as Saturday was, it came up just a little bit short.

The racing surface was in fine shape, but the facility itself was rough around the edges in visible ways, be it overgrowth intertwined with the barbed wire separating the grandstands from the track access road or the majority of the track concourse looking abandoned, with dated signage still referencing where souvenirs and food used to be sold. Nothing that would impact the ability of the track to host races, but obvious details that were either overlooked or outright ignored.

Entering the racing program, even as heat races went green, all 72 laps of the headline modified feature were not yet sponsored, despite a week-long effort to find said sponsorship. Though the track announcers stated that a contest for racecars sporting the best Halloween get-up was a Five Mile Point tradition (and that there were some great-looking Halloween cars in the field), said cars were the exception, not the norm.

A dozen cars participating out of well more than 100 on-site speaks to a tradition either fading or forgotten.

Perhaps most telling was the crowd. While the parking lot was indeed jammed (one of the guest PA announcers reported even during heat races that she had been parked in a three-wide situation) and the crowd healthy, Saturday night’s attendance was nowhere near capacity as reported by Syracuse.com; I had an entire row to myself for the entire night on the turn 4 side of the facility when I finally settled in to watch on-track action.

(Newsmaker of the Week // Five Mile Point Speedway) has been published on The Official Site of Area Auto Racing News and Len Sammons Productions – https://t.co/TGBpT3FV0r pic.twitter.com/tPwyyWiq8g

Having said that, I will commend the crowd that did show, because despite Saturday’s program running seven hours from the start of heats to the end of the modified feature, there were very few early departures. And that’s despite weather that had dipped to 37 degrees by the end of the said modified race; my feet both went numb soon after the penultimate sportsman feature went green.

And that’s also despite a racing surface that never widened out. Though my track walk later in the evening didn’t show any evidence of the track taking on rubber, both the sportsman and modified features were largely follow-the-leader affairs. Speaking to a former track employee during said walk, he told me that the track had always been a bottom-dependent bullring, with the low groove right against the tractor tires the only fast way around.

There was drama to be had in the 72-lap feature that brought the track’s history to a close. Polesitter Nick Rochinski led more than 50 laps to start the feature but was visibly losing the handle on his car, eventually spinning half a lap after losing the race lead to a well-timed crossover move. Then, like too many long-distance races in 2022, the affair ended with a rash of flat tires bringing out caution flags that robbed the closing laps of any momentum.

To an objective viewer like myself, making my first (and only) visit to Five Mile Point, it was a bit of an underwhelming finale. A big crowd, but not huge. A big race, but far from a classic.

That’s not to say the emotion of the night wasn’t obvious at times. Walking the racing surface after the final checkered flag flew Saturday night, I spoke to several individuals, including a man who was making his first visit to Five Mile Point after 15 years since he worked at the facility. He was a veritable storybook, recounting a story of how a driver junked a brand-new racecar jumping turn 1 before the concrete barriers in the track corners were even erected.

There were plenty of race fans on the surface that night just looking to talk. I didn’t quite know how to explain that vibe until later this week, with Area Auto Racing News making reference to “Five Mile Pride,” what the outlet described as a longstanding mantra of the track’s regulars.

In that context, Saturday night’s final modified race felt like a more appropriate ending, with third-generation Five Mile Point driver Justin Holland scoring the win in a field that was chock full of drivers who were playing the same role on the track that I was in the stands, taking their final shot to experience race day in Kirkwood. There were definitely ringers in Saturday’s field, including Michael Maresca and Outlaw Speedway regular Tyler Siri.

Perhaps the most quantifiable measure of that “Five Mile Pride” came during that late-night track walk. I spent roughly 45 minutes on the surface, taking pictures, walking a full lap, and collecting a clay and foam sample (the track is one of the few out there still using foam blocks in the corners a la Toledo Speedway), but honestly waiting for a shot to snap a proper quiet track picture.

That wasn’t in the cards. Because there was a non-stop flood of competitors and fans alike that didn’t stop flowing onto the racing surface, with a literal line of cars forming to take pictures along the backstretch wall where the track’s name was painted. And there was the literal vehicle traffic, with plenty of competitors opting to grab a few more laps.

With my feet numb and my nose blowing black (turn 4 at Five Mile Point was borderline Tyler County Speedway bad in terms of dust), I opted to forgo getting a Jeff Gluck-esque final shot and called it a night after 10 hours on site, saying goodbye to yet another bullring as 2022 continues to bring a rash of track closures.

It was an ominous, if not ironic, sight that marked the last thing I saw on leaving the track through the pit entrance. Buried in the brush right at the gate to turn into the pit area was an abandoned ticket booth, overgrown, busted up and a sad portent of what likely awaited the speedway campus (multiple competitors I spoke to in the pits earlier in the day noted that the company buying the property were not going to immediately build on it, meaning it’s going to sit desolate for at least a little while).

On the one hand, it was a solid farewell for a historic venue. A big crowd did show up for a big race, contested by a big field of racecars (42 modifieds showed up that Saturday night for the $7,200 prize).

But, as was noted early on the track PA during the evening, “It’s a shame we couldn’t have a turnout like this all the time.”

Five Mile Point Speedway was a cool little bullring that dirt racing’s going to be worse without. But on a night that saw things good, but not great, functional but not pristine, it was a stern reminder that history only goes so far.

Pride doesn’t have to disappear, only to fade, for the consequences to be drastic.