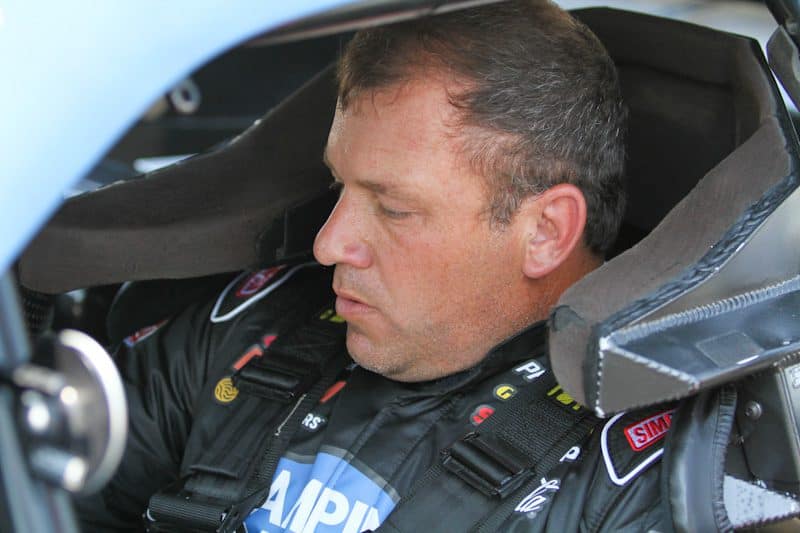 After a slight down year in 2021 that saw less drivers not return to NASCAR due to the COVID-19 pandemic’s effect on 2020 entry lists, the crop of racers not back in at least one of NASCAR’s national series in 2022 is comparatively hefty.

None were particularly expected, save for perhaps Derrike Cope; even as drivers like Michael Annett announced their retirement from full-time NASCAR competition at the end of 2021, some still show up in one-off appearances, something that wasn’t as common in 2022.

Some initially made plans to race in 2022, only to be sidelined due to sponsorship constraints. Others could be found at your local short track, be it asphalt or dirt.

For reference, check out the navigation bar below for past editions of this article, which date back to 2015.

Michele Abbate: Abbate competed in Trans Am in 2022 after making her NASCAR Camping World Truck Series debut in 2021 with On Point Motorsports at Circuit of the Americas.

Morgan Alexander: Multiple starts across the Truck and ARCA Menards series disciplines in 2021 did not translate to 2022 starts for Alexander, who raced on the dirt scene this year.

Willie Allen: Allen’s Rackley WAR NASCAR Camping World Truck Series team scored its first win in 2022 at the hands of Matt DiBenedetto at Talladega Superspeedway. Allen himself did not drive one of the team’s trucks.

Michael Annett: Rumblings about a part-time slate of races after his retirement from full-time competition didn’t materialize for Annett. His longtime sponsor Pilot Flying J now often adorns the entries of Sammy Smith.

Brian Brown: Brown is back racing solely on dirt tracks outside the NASCAR realm after his one-off start with Kyle Busch Motorsports in the Truck Series last year.

James Buescher: The one-time Truck champion works as a realtor and made no return to NASCAR in 2022 after a one-off Daytona International Speedway start in the Truck Series last year.

Ray Ciccarelli: Ciccarelli’s only NASCAR-related appearance in 2022 came when his team, CMI Motorsports, was the listed owner of Andrew Gordon‘s Bristol Motor Speedway dirt track truck, as the chassis had not been properly moved over to G2G Racing, the team with which Gordon had initially partnered. Gordon’s truck was renumbered from No. 46 to No. 49.

Chris Cockrum: For the first time since his 2011 debut, part-timer Cockrum — who mostly competed at superspeedways — did not attempt a race in the NASCAR Xfinity or Truck series.

See also
Dropping the Hammer: Ross Chastain Did That

Trevor Collins: Collins is one of many dirt racers who opted not to return to NASCAR at Bristol or Knoxville Raceway in 2022, instead competing locally or on the national dirt circuit.

Derrike Cope: Cope’s 2021 Daytona 500 start was announced as his final Cup appearance — and to date, it has stuck, with the 1990 Daytona 500 winner not returning to NASCAR this year.

Erik Darnell: Darnell surprised many when he appeared in a Niece Motorsports truck last year, his first NASCAR race in nine years. It did not stick for 2022.

Spencer Davis: Early in 2022, Davis tweeted he had plans to potentially run some Truck races with his own team toward the end of 2022, but he did not end up making it to the track in NASCAR this year. His former number, the No. 11, will be fielded by TRICON Garage in 2023 with driver Corey Heim.

RC Enerson: Enerson initially planned a return in the 2022 Indianapolis 500 in the NTT IndyCar Series, a start that’s since been pushed to a potential attempt in 2023.

Cody Erickson: Does not appear to have raced professionally in 2022.

Ryan Eversley: Ryan Eversley could be found in the WeatherTech SportsCar Championship in 2022 for RWR Eurasia Motorsport (yes, the RWR stands for Rick Ware Racing, the team that gave him his premiere Cup start last year). He scored a third-place finish at Canadian Tire Motorsport Park.

Colin Garrett: As a slight technicality, Colin Garrett made it to the track in 2022, as he was entered to drive the No. 30 for On Point Motorsports at Sonoma Raceway. However, Garrett’s drug test results were not received by NASCAR in time and he did not end up competing.

See also
Sheldon Creed Back in Xfinity in 2023 With RCR, Whelen

Brandon Gdovic: Gdovic could be found in the sports car ranks in 2022.

David Gilliland: Gilliland opted to focus on running the NASCAR and ARCA programs of David Gilliland Racing as just an owner in 2022. The Gilliland name still competed for the team in 2022, as Todd Gilliland won in the No. 17 truck at Knoxville Raceway.

George Gorham Jr.: Florida late model racer Gorham went back to doing just that in 2022 after making his NASCAR Xfinity Series debut in 2021 for DGM Racing at Martinsville Speedway.

Mario Gosselin: No one-offs for Gosselin this year; the owner-driver solely did the former on the national level in 2022, running Xfinity team DGM.

Jake Griffin: Griffin ran both asphalt and dirt in 2021 in the Truck Series. No starts, though, in 2022; he instead competed on the national dirt scene.

Brad Gross: The Trans Am Series was Gross’ home in 2022 after a 2021 that saw him attempt his Truck debut at COTA with CMI.

JR Heffner: An on-again, off-again dirt ringer in the NASCAR ranks, Heffner went back to racing on dirt away from NASCAR in 2022.

Quin Houff: Despite attempting to accumulate sponsorship for a few NASCAR starts in 2022, the closure of StarCom Racing put Houff out of a ride for 2022.

Cameron Lawrence: Lawrence also ran in Trans Am in 2022.

Stephen Leicht: The 2012 Cup rookie of the year was linked to a team called Blue Ridge Racing earlier in 2022 that planned a NASCAR Xfinity Series schedule, but it did not come to fruition.

Raphael Lessard: Lessard seemed set to return to NASCAR competition in 2022 in the seat of the JC Stout-owned No. 87 in the Xfinity Series. The organization, SQR Development, did not make it to the track, however, and Lessard mostly ran in the NASCAR Pinty’s Series in Canada.

Bill Lester: After a surprise return in the Truck Series in 2021, Lester does not seem to have raced professionally in 2022.

Robby Lyons: Lyons does not appear to have raced professionally in 2022.

Jamie McMurray: McMurray’s one-off return in the 2021 Daytona 500 after initially announcing the 2019 event as his last race has not spurred any national series races for him since — though he remains employed by FOX as an analyst.

Paul Menard: After a surprise return to NASCAR in 2021 in the Truck Series, Menard was back in Trans Am in 2022.

Michael Munley: Munley is now working for NASCAR as a technical inspector.

Ryan Newman: A streak of competing in NASCAR’s national series going back to 2000 was snapped in 2022, as 18-time Cup winner Ryan Newman did not make a single start this year after losing his ride in the No. 6 at RFK Racing to new owner Brad Keselowski. Newman, however, is far from retired, showing up on the NASCAR Whelen Southern Modified Tour and various dirt races throughout the country. Oh, and he ran full-time in the Camping World SRX Series, winning at Stafford Motor Speedway and finishing second in points.

Todd Peck: Peck’s family-owned Truck team made one appearance in 2022, fielding the No. 96 for Mason Maggio at Richmond Raceway.

Timothy Peters: 2022 marked the first time since his 2005 Truck debut that Peters did not enter at least one NASCAR national series race. He competed locally in 2022 and has said that this may be his last year racing.

Parker Price-Miller: Price-Miller did not return to NASCAR for a second stint on dirt in 2022, opting to focus his attention on national dirt racing. He was involved in a hard crash at the 2022 Knoxville Nationals.

Ryan Reed: Reed has been working as a driver coach for Truck regular Jack Wood.

Bobby Reuse: Reuse competed on a smaller scale locally in 2022.

Roger Reuse: Reuse was initially announced to race part-time with G2G Racing in the Truck Series s in 2022 but did not make any appearances.

Codie Rohrbaugh: Rohrbaugh’s family-owned team, CR7 Motorsports, ran a full Truck schedule and part-time ARCA events, but Rohrbaugh himself did not get behind the wheel.

Cory Roper: Part-time Truck owner-driver Cory Roper entered but withdrew from Talladega this year, his only time appearing on an entry list in the series in 2022.

Donny Schatz: Like many on this list, dirt racer Schatz returned to non-NASCAR competition in 2022 after entering as a ringer in one of the national series’ three dirt event in 2021.

Mike Skeen: Road course ringer Mike Skeen ran multiple events in WeatherTech in 2022, with a third-place finish coming in the 24 Hours of Daytona in his team’s class.

Dave Smith: Smith raced locally and worked as a driver coach this year.

Kyle Strickler: After a year off from Truck dirt racing as a ringer in 2020, Strickler returned in 2021. He was not back in 2022, instead being found at dirt races across the country.

Carson Ware: Indefinitely suspended in October 2021 after being arrested on charges of assault and property damage in North Carolina, Ware was reinstated by NASCAR in June but did not see national-series action this year.

Jason White: Not to be confused with the Canadian-born Jason White, who drove a part-time Truck and ARCA Menards Series schedule as he often does, the American White, despite some rumblings of an Xfinity return early in the year, did not race on the national level this year.