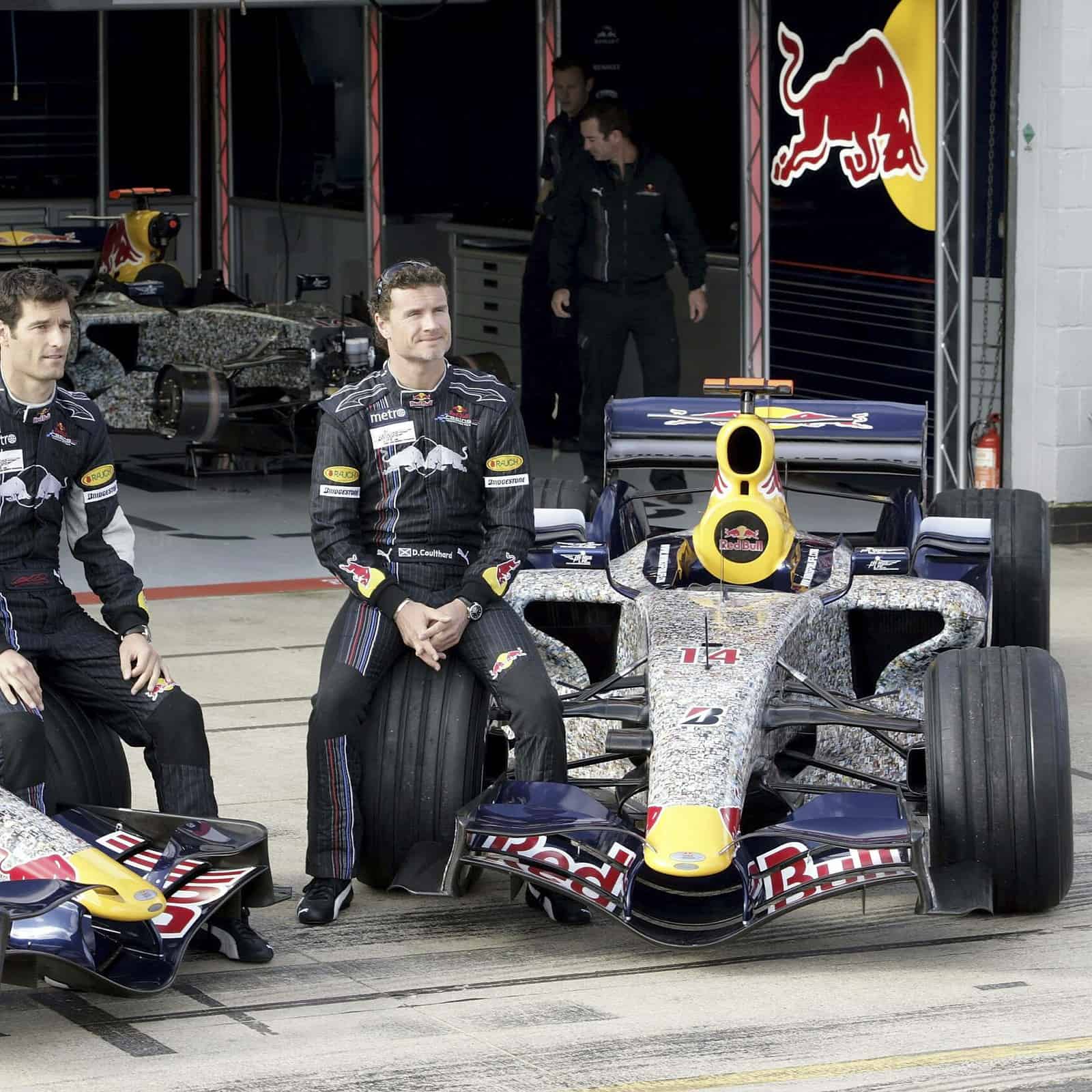 The Red Bull team has its roots dating all the way back to Stewart Grand Prix, owned by the legendary Jackie Stewart. The team competed from 1997 to 1999, finishing ninth, eighth and fourth in the constructors’ championship. Rubens Barrichello raced for Stewart in all three seasons, and in quite the twist, modern Red Bull champion Max Verstappen’s father, Jos Verstappen, drove for the team in the second half of 1998. The Ford-powered car actually had some life in it in its final season, with Barrichello scoring three podiums and Johnny Herbert outright winning the European Grand Prix at a soaked Nurburgring. Following that season, Ford bought the team whole sale and rebranded it into Jaguar Racing.

The team had three highlights in those years, in which they never finished higher than seventh in constructors’. The first was a podium in Monaco in 2001 thanks to high attrition and a very solid starting spot of sixth for Eddie Irvine. Much the same happened in 2002 at Monza, with Irvine scoring the podium once again.

The final highlight came in their final season, in which a pair of mechanics won an inflatable Donkey from the movie Shrek and paraded it around the paddock at seven races. No, this is not a joke. There’s even a gallery of most of the drivers on the grid signing it. There is a picture on the internet of Kimi Raikkonen signing an inflatable balloon of Donkey and this is obviously the greatest thing either Stewart or Jaguar ever accomplished.

Anyway, the balloon was eventually auctioned for charity. Jaguar was auctioned off not too long after.

Red Bull purchased the team in advance of the 2005 season and their choice as to who would run the team was perfect. Some people love Christian Horner and thank he’s great. Some people think he’s an asshole. Regardless, the one thing neither side can call Horner is quiet. An excellent choice for a loud, in-your-face brand like Red Bull.

Horner tried his hand as a driver and made it as far as Formula 3000, the final step for many into F1. In pre-season testing one year, he followed Juan Pablo Montoya through a high speed corner and decided after watching the Columbian that he wasn’t cut out for driving. Turning his attention to management, Horner focused on running his own team, Arden International, and would win the team championship in F3000 in 2002, 2003 and 2004 prior to his landing the Red Bull gig in F1. Horner became the youngest team principal by far on the F1 grid in 2005 at the age of 31.

Red Bull wasn’t entering the sport blind. In addition to years of sponsorship with the Sauber team, the Red Bull Juniors program had already began fielding drivers, most of them Austrian, in 2001 in the feeder series. In 2002, they ran an American specific version of the Junior program, with a number of drivers going through the program. Most notably, Scott Speed would eventually be the lone graduate of this version of the Junior program to actually make it to F1.

Red Bull itself did not have much involvement with this car, due to the sale happening during the off-season and Horner himself not stepping into his role leading the team until January.

The most control Red Bull had in this year was on the driver lineup, and it was an interesting one to see. David Coulthard, who had won 13 times in his 11-year career, was hired as the team’s lead driver. Joining him was former Red Bull Junior team graduate Christian Klien. It was a no brainer for Klien to be hired, as he was already a known commodity to the team and had raced for Jaguar in 2004.

However, it was a little more complicated than that. Vitantonio Liuzzi won the F3000 championship in 2004 with Arden, and had been promised at least some races in his agreement with Red Bull to join the team as a test driver after testing for the team in the winter. Thus, Klien stepped out of his seat for four races. Liuzzi had one points finish compared to Klien’s two in one less race, and this Klien was given the ride for the rest of the season starting in Canada.

Two big changes came to Red Bull in 2006, although the fruits of both would come later down the road. The first was that Red Bull purchased half of the Minardi race team. Minardi, which had raced as lovable underdogs for decades at this point, became known as Toro Rosso, which is Italian for “Red Bull.” Because, you know, the team was based in Italy.

That’s the joke? Also, it still is today as AlphaTauri.

The other big change was that the team would hire Adrian Newey to be its car designer. Although Newey did not touch the 2006 car due to joining the team in February of 2006, his impact is still very much felt to this day as the team’s chief technical officer. Hiring Newey was an expensive decision, but also the right one considering his history in the sport of turning both Williams and McLaren into champions.

Toro Rosso’s job was to develop young talent to potentially be moved over to Red Bull. It was given quite the task in 2006, as Toro Rosso would use the old RB1 chassis and its old engines.

The first two drivers for Toro Rosso were both fairly easy decisions. Liuzzi arguably deserved a better chance to develop as a driver and got the seat, while Scott Speed had finished third in the new GP2 Series in 2005 and was aligned with Red Bull as is to be the next top American F1 driver. In spite of the underperforming car, both drivers performed largely okay. Liuzzi beat Speed pretty easily in the car, and scored the only point that the team had all season at Indianapolis.

The Red Bull team had much less reliability and only finished in the points in seven races. However, the highlight of the year came in Monaco, where the team scored its first podium with Coulthard coming home in third. After the podium celebration, Horner honored his promise to jump into the Red Bull team’s pool naked if the team scored a podium, wearing only a Superman cape due to the team’s promotion of the new Superman movie. Coulthard also showed up to the podium wearing a cape.

This was a race team.

The big reason for why the Red Bull team was garbage in 2006 was because they had signed a long-term deal to start using Ferrari engines in place of Cosworth. Cooling issues and general underperformance necessitated the main Red Bull team handing off its Ferrari contract to Toro Rosso, which was basically told to sink or swim as RBR moved to more stable Renault engines.

Mark Webber signed with the team in late 2006 to start racing in 2007 and with Coulthard returning to Red Bull, Klien was offered the chance to race for a Red Bull sponsored team in Champ Car in 2007. Klien said no. RBR responded by firing Klien with three races to go. Robert Doornbos replaced him and didn’t finish in the points at all.

Red Bull essentially got around both of these teams using the same car by building the chassis through a third company called Red Bull Technology. Both teams develop their own cars separately now, but back then, these chassis at the start of the season was more-or-less the same. The key difference between the two teams was the weaker engine on the Toro Rosso, and both cars mightily struggled with reliability.

The fireworks this season came at Toro Rosso, as they retained their lineup and things started to come to a head for Speed.

Speed had three DNFs for colliding with other drivers in the first nine races of the season, capping it off to spin off the road in a bizarre rain soaked European Grand Prix at the Nurburgring. This led to a confrontation with Franz Tost, team principal of Toro Rosso, and Speed, which thus led to Speed being fired in the middle of the season. Speed moved back to America and tried his hand in stock cars, as Red Bull decided to pull a Junior driver of theirs that was contracted to the Sauber team as its test driver.

Robert Kubica had a terrible wreck at Montreal that left the young driver concussed. Sauber would put its test driver, Sebastian Vettel, in the car for Indianapolis after Kubica wasn’t cleared to return so soon. Vettel wowed by keeping cool under pressure and finished eighth for a point in his first race. With Speed being fired a couple of weeks later, Vettel was pulled from the Sauber team to return to the Red Bull camp in a Toro Rosso seat. The German was just 20 years old.

Meanwhile, over on the main Red Bull team, the cars were fast but still struggled with reliability. Webber got the team’s third podium in that Nurburgring race and was on target to do so again in Japan later on in the season. In spite of throwing up in the early stage of the race in his helmet, Webber was running second on merit at one point before being hit from behind under caution by the third place driver… Vettel.

Vettel was incredibly distraught over his mistake, it happening in horrible race conditions with rain and spray everywhere. Not only had he cost the young Toro Rosso team its first podium, he had denied the mothership its third. The race broadcast caught the German crying in a corner of the garage over his costly error.

In the penultimate race at Shanghai, Vettel was able to make up for his costly error in Fuji with a great performance in the wet, finishing fourth. Liuzzi finished sixth to score the lone points the team would earn that season, setting the stage for 2008.

And by setting the stage, I mean as in the 2008 car wasn’t ready in time, and the team had to wait as late as Montreal for the STR3 to make its debut.

But when the STR3 arrived, so did Vettel.

In addition to his legendary drive in the heavy rain at Monza, Vettel scored points in eight of his 13 starts in the SRT3, completely wiping the floor with teammate Sebastien Bourdais in the head-to-head battle.

It was absolutely stunning. In the span of one year, Vettel went from weeping in the back of a garage in Japan wondering if his F1 career was over to outscoring the Red Bull team all on his own. Vettel’s 35 points were higher than Red Bull’s 29 constructor points. As big and as sudden as Lewis Hamilton was to F1, Sebastian Vettel had become the thunder to his lightning in Hamilton’s sophomore season.

The main Red Bull team performed better than it had in its first three seasons, but were anchored by Coulthard, who was driving in his final season. Coulthard was able to get the team’s lone podium of the year in Montreal, but he was only able to also finish in points in that Monza race. Webber scored points in half of the races, but his lack of podiums marred the team and himself behind Vettel in points.

In 2009, Vettel would move up to the main team to take Coulthard’s seat, pairing him with Webber. What happened next? If you know “Multi-21”, you probably already know, but that’s a story for another time.