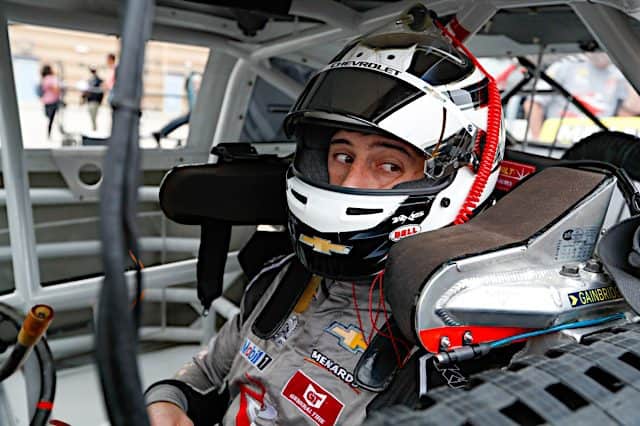 Rev moves to the Truck Series with an alliance with Kyle Busch Motorsports.

“I’m very excited to continue driving for Max and Rev Racing in the Truck Series in 2023,” Sanchez said in a team release.” To be able to join forces with our technical partner, KBM, is a great opportunity for me to learn how to win on a regular basis. Continuing my relationship with Chevrolet and Gainbridge is something that I value greatly and this is seemingly another step in our long-term plan/goal.”

He has also made seven NASCAR Xfinity Series starts with a combination of BJ McLeod Motorsports and Big Machine Racing Team. Sanchez’s best run was a seventh-place finish last weekend at Martinsville.

“This is a pivotal moment for our organization,” Rev owner Max Siegel. “With our unwavering focus on a commitment to diversify the sport while putting a model in place to train and prepare drivers for the next level of competition, and because of our strategic partnership with Gainbridge announced earlier this year, we have never been more prepared for this next stage of advancement. Working with our technical partners at KBM and Chevrolet, we know Rev Racing and Nick are positioned for competitive excellence.”

The season opener at Daytona International Speedway will mark Sanchez’s debut, should he qualify.

“Unofficially we’ve been a part of helping former Rev Racing drivers take the next step in their NASCAR careers in the Truck Series, with Bubba Wallace and Daniel Suárez both getting victories in a KBM truck, so we’re looking forward to aligning with Max, Jennifer and everyone at Rev Racing to now officially be a part of the pipeline for young drivers in their diversity program to continue to advance into the national series of NASCAR,” KBM owner Kyle Busch added. “Nick is an impressive young driver, winning the ARCA title this year and has had some solid runs in the Xfinity Series as well, so we’re looking forward to having him be the trendsetter of what we’re confident will be a successful program for many years to come.”

Rev has not yet announced its plans for its existing ARCA team, which fielded Sanchez and Rajah Caruth in 2022.