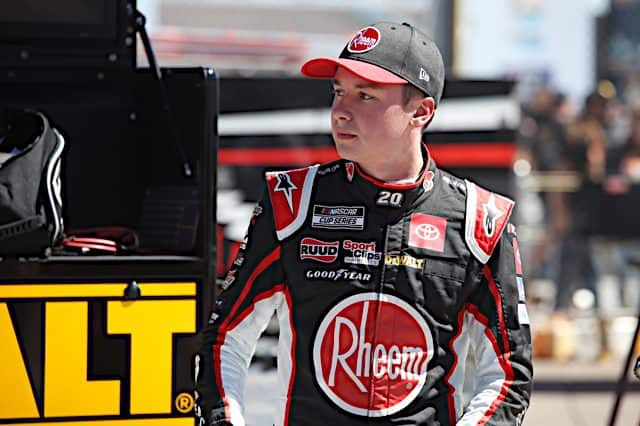 It’s the final countdown, as the NASCAR Cup Series 2022 season comes to a close this weekend at Phoenix Raceway.

Phoenix is a 1-mile, flat D-shaped oval with a wide dogleg, which drivers often use to try to pass multiple cars on the apron, especially after restarts. The Next Gen cars first took on the desert racetrack in March, with Chase Briscoe earning his first Cup win.

Briscoe and Ryan Blaney both led over 100 laps (with the latter out front for 143), while Chase Elliott led 50 circuits.

So how do you approach this weekend for daily fantasy NASCAR DraftKings? Place at least two of the four drivers in the hunt for the title in your roster, as they will likely finish up front and lead laps.

You can also choose drivers who have performed well lately, especially the lower-priced drivers, as they can help you fit several championship contenders in your lineup.

If you want to switch things up, you can play someone who typically runs well at Phoenix, since we’ve seen several non-playoff drivers win races in the playoffs. That’s mainly for tournaments, though.

Cup teams practiced Friday night, Nov. 5, while qualifying starts Saturday, Nov. 6, at 3:30 p.m. ET and airs on USA Network. Check out these results to help you finalize your rosters.

Before I share my last driver picks of the season, here’s a look back at how last week’s roster did at Martinsville Speedway:

For the second week in a row, a Richard Childress Racing driver (Austin Dillon) crashed out of the race, producing a negative score on DraftKings. Though this lineup had some solid fantasy scores from Elliott, Joey Logano and Brad Keselowski (before he got disqualified), the negative score really hurt my total.

Waiting until practice and qualifying is finished can help you finalize your player pool for DraftKings. My other two lineups that I had in the $3,000 Quarter Jukebox tournament won some money; the one that had Denny Hamlin and Christopher Bell (who each led 150+ laps) scored 75 cents. Both drivers were really quick in practice, so that’s why I had my eye on them.

It’s also likely why they landed in the top scoring lineup in that aforementioned tournament on DraftKings, along with Blaney, Keselowski, Harrison Burton and Todd Gilliland. These drivers’ scores totaled 441.7 fantasy points.

Bell may have taken the lead late in the race to win his way in to the Championship 4, but he led 150 of the 500 laps, showing he was no slouch. And since he started back in 20th, his DraftKings score was really high at 134.8, thanks to those extra position differential points.

The No. 20 Joe Gibbs Racing driver has performed very well at other short tracks, too. Bell led 143 laps at Bristol Motor Speedway en route to fourth, while at Richmond Raceway in August he was runner-up. He also won at another 1-mile flat track — New Hampshire Motor Speedway — and led 42 circuits there. Plus, Bell earned another fourth at Dover Motor Speedway. Let’s face it, he’s great on the short tracks.

However, Phoenix isn’t just any 1-mile course; it’s uniquely shaped. The track is very wide, both on the racing surface and on the apron in the dog leg. Bell has just two top 10s there, a pair of ninth places in both races last year. He unfortunately finished 26th in the spring.

Still, his recent success and determination will help him get to the front and finish well.

Wow, how about that move to advance to the Championship 4? In case you haven’t seen it, here you go. Chastain literally rode the wall in turns 3 and 4 at Martinsville to pass Hamlin for the final points position above the cut line. Pretty insane. If he has the guts to pull something like that off and nail it, who knows how aggressive this Florida native will be to try to earn his and Trackhouse Racing Team’s first championship?

That’s partly why I want him in my lineup for Phoenix. I also like Chastain’s results in the playoffs, as he has four top fives and six top 10s in nine races. This includes top fives in the last three events: two straight second-place finishes and a fourth last week. He was also sixth at Bristol, eighth at New Hampshire and third at Dover, another 1-mile facility.

Though his second place in the spring at Phoenix was his lone top 10 at this track, Chastain should end the year on a high note.

The storyline last week at Martinsville was Chastain, but Blaney gave a valiant effort to try to make the Championship 4, ultimately coming home third. Blaney’s also had good results on some other tracks of 1 mile or less in length. At Richmond, he was 10th in August and seventh in the spring race. He also placed fourth in the first Martinsville race and at Phoenix.

As I mentioned earlier, Blaney led 143 laps after earning his first pole of the year in that event. Last fall, he also was out front for 33 circuits, breaking up the Championship 4 for a portion of the race. His fourth-place finish was the fourth consecutive top 10 at Phoenix for the Team Penske driver. Plus, he snagged a third place in both events in 2019.

Look for Blaney to lead laps once again and try to earn his first and only victory of the year.

Let’s face it, Phoenix isn’t one of Wallace’s best racetracks. However, he did advance from 30th to 10th in 2018, his best career finish here. Wallace also gained eight spots in each race in 2020, earning a 19th and 15th in the spring and fall, respectively. And in the spring 2021 race, he went up nine spots.

But Wallace’s last two events there haven’t been as good; he finished 22nd in March, while last fall he crashed out after just five laps after contact from Corey LaJoie. Not the best end to his year.

So why is Wallace in this lineup? Well, partly because he gained 16 spots to finish eighth last week, showing respect and determination after being suspended a race due to his contact with Larson at Las Vegas Motor Speedway.

I also liked some of his runs at the shorter tracks, like New Hampshire, where he ended up third. Wallace was also 13th at Richmond in August. Though the 1.5-milers were more of his strength this season, Wallace should still place in the top 15 or 20 at least.

OK, I know Keselowski got disqualified last week, but DraftKings doesn’t count disqualifications (as of yet, anyway). So he was scored from fourth place, scoring 46.5 DraftKings points after recording 10 fastest laps. It would have been his second straight top five after earning a fifth at Homestead-Miami Speedway.

He and his RFK Racing team have really turned things around, especially on the smaller courses. At Bristol, Keselowski led 109 laps before a flat tire messed up his run; he ended up 13th. Additionally, he was 15th at Richmond in August and seventh at New Hampshire — both comparable ovals to Phoenix.

Although Keselowski’s track history with Penske doesn’t really translate to this season with RFK, he could still earn a good result like the last two fall races here (10th and second place in 2021 and 2020, respectively).

Gilliland is mainly here as a filler, as he likely will only gain a few positions during the race. He drove from 33rd to 19th at Phoenix in the spring. In the NASCAR Camping World Truck Series, he placed ninth and eighth the last two years at this track.

Last week at Martinsville, the Front Row Motorsports rookie advanced from 19th to 13th, earning a solid DraftKings score. Gilliland also earned his second top 10 of the year at Talladega Superspeedway during the playoffs, coming home seventh. Plus, he was 18th at Bristol after starting 30th, jumping up a total of 12 spots.

That’s really all you need from a driver at this salary.