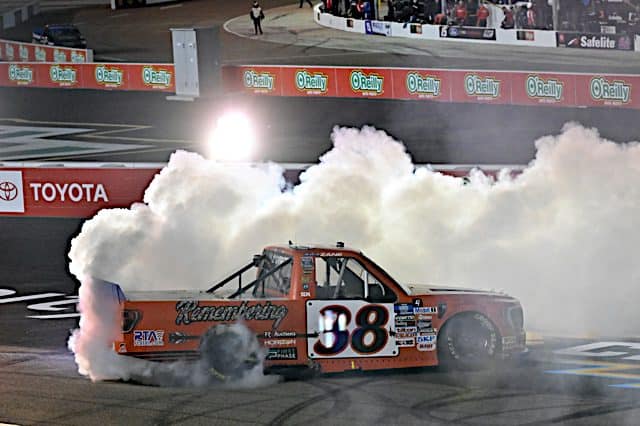 After finishing runner-up in the championship the previous two seasons, the third time is the charm for Zane Smith, who’s finally a champion in the NASCAR Camping World Truck Series as of Friday (Nov. 5).

It wasn’t an easy road to the championship, though. Smith took the lead on an overtime restart and held off Ben Rhodes and Chandler Smith in the final lap to win the race at Phoenix Raceway, taking the championship in the process.

Smith won his first career pole earlier in the afternoon – surprising considering his Truck Series success. He swept the stages and led the most laps, but a late caution for Hailie Deegan resulted in differing strategies, with Rhodes assuming the championship lead late in the going.

After a hard-fought battle between all four contenders, Smith took the lead on the final lap and had to brace for one last attempt from Rhodes to move him out of the way but was able to do so and finally seal the deal after losing the championship late in the race last year to Rhodes.

Only One Caution in First Two Stages

Other than the stage breaks, the only caution for cause in the first nearly 100 laps of the race came on lap 9, when Armani Williams and Keith McGee crashed together in turns 3 and 4, ending both of their nights.

After that, the next caution for cause came on the stage three restart.

When the final stage began, turn 1 became a problem spot on restarts.

It began on the initial restart that kicked off stage three, when Christian Eckes was in the middle of a five-wide situation that resulted in Tyler Ankrum turning Eckes into the outside wall, ending his streak of five consecutive top-10 finishes. He finished 30th, his second-worst finish of the season behind Sonoma Raceway, where he finished 35th.

The following restart didn’t see drivers fare any better and ended up taking out more trucks. Layne Riggs, who qualified an impressive second earlier in the afternoon, washed up into Taylor Gray and turned him around, collecting Rajah Caruth in the process. All three drivers sustained damage; Caruth suffered enough damage to cause him to retire from the race – he was credited with 32nd. Gray recovered to finish 17th, while Riggs finished 13th.

On that restart, Riggs’ teammate/team owner Stewart Friesen was penalized for changing lanes before reaching the start-finish line, forcing him to start at the rear of the field on the restart.

For most of the night, it looked like it was Zane Smith’s championship to lose, and he seemed to be on track to easily win the race and championship until Deegan cut a left-front tire and hit the turn 3 wall with just 16 laps to go.

Altering pit strategies ensued between drivers – especially the Championship 4. Rhodes took two tires, putting him way out in front of the other three drivers, who took four.

The strategy looked like it would work for Rhodes, who challenged Friesen (another two-tire strategist) for the lead for several laps before getting by, with the other championship contenders right behind. Soon, all four championship drivers were in positions 1-4, battling for the win.

One week removed from Rhodes squeaking into the Championship 4 with help from teammates Eckes and Matt Crafton at Homestead-Miami Speedway, it was his other teammate that ended up ruining Rhodes’ strategy.

As the four championship drivers battled for position, Ty Majeski looked underneath Zane Smith for second with four laps to go. The two made a slight amount of contact as Majeski washed up the track, which was exactly what Rhodes needed to hold on for his second consecutive championship.

What Rhodes didn’t need, however, was Majeski to lose control and spin out off of turn 2, which is exactly what happened.

Majeski ended up finishing 20th, a distant last of the Championship 4, but the finish was not indicative of just how close he was to potentially winning the championship.

Rhodes was unable to fend off the Smiths’ four fresher tires on the following restart; however, the two made contact, which allowed him to stay close. After passing Chandler Smith for second, Rhodes was not close enough to move Zane Smith for the win.

After several races of having the title clinched, Corey Heim can officially call himself the 2022 Rookie of the Year.

However, when it comes to Rookie of the Race, there are two winners this week. Riggs, despite the accident and subpar finish, qualified outside pole and challenged for the lead early, continuing to show his talent in a truck. Meanwhile, amid the championship chaos, Kaden Honeycutt snuck into the top 10, finishing a career-best ninth for On Point Motorsports.

Both are drivers to watch for offseason plans heading into 2023.

Sponsors with fun and fast names to remember usually end up having great paint schemes.

Jack Wood and his No. 24 Quick Quack scheme is no different.

With the NASCAR Xfinity Series championship race on deck Saturday (Nov. 5), having the catchphrase of “Don’t Drive Dirty” on the quarter panel is a sentiment to remember beyond Friday’s race.

Also, supposedly the duck that is adorned on the hood of the truck is nicknamed Quackles.

Time to get some rest.

The 2022 Truck season has come to an end. Among the several changes being made throughout the offseason, the series’ title sponsor is among the big ones.

With that being said, the next race for the NASCAR Craftsman Truck Series will be on Feb. 17, 2023. The traditional season opener at Daytona International Speedway awaits teams in a little over three months’ time.

do you now how to get in touch with steve reeves