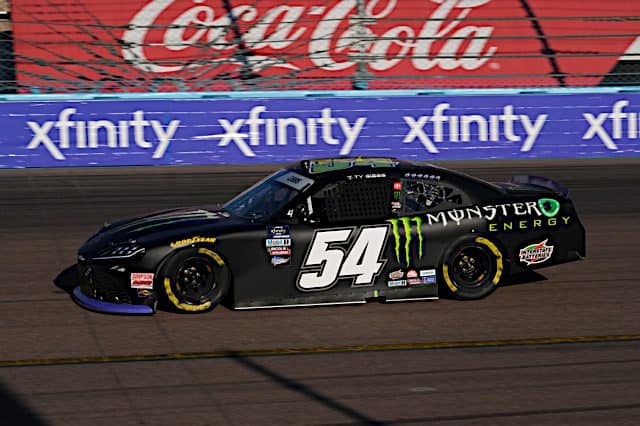 Ty Gibbs won the race and NASCAR Xfinity Series championship at Phoenix Raceway Saturday (Nov. 5), getting by fellow title contender Justin Allgaier with 21 laps to go and holding off Noah Gragson in the closing laps.

Gibbs was behind Allgaier on a restart with about 30 laps to go but after going side-by-side with Allgaier for a few laps, the No. 7 went wide up the racetrack, allowing for Gibbs to take the lead.

The No. 54 earned his seventh win of the season after starting on the pole.

“First off, I just want to say thank you to my team, everyone of these guys, my pit crew, they did an awesome job, they put us here,” Gibbs said after the race. “Great job to my team.

“You know, what I did last week was unacceptable and I apologize once again, but it was unacceptable because we could’ve had two shots to win this deal. It was different from an organization standpoint, so all my fault. I can sit here and tell you I’m sorry as much as I can, but it’s not gonna fix it. I’ve gotta fix my actions.

“I feel like today I had a good race, feel like I made some good moves. Me and the [No.] 7 raced really hard, hopefully we put on a great show for you guys fans…”

Some fans voiced their displeasure of the Joe Gibbs Racing driver with a chorus of boos.

When Gibbs was asked if he was worried about what Gragson might do if he got close behind him, he said, “Not at all. I focused out the windshield, I feel like we had a great race with those guys. Great job to JR Motorsports. The 25% won.”

Gragson, who came home second to Gibbs, explained what he needed in the race.

“Execution on pit stops,” Gragson said. “We just needed to be better as a Bass Pro Shops team. But all around, so proud of everyone’s efforts. Thought we had a really good car there in the second half. Restarted eighth on that last restart, got up to second, just not enough, just too tight there at the end. Still super proud of everybody.

“Just didn’t have enough for him at the end, but it wasn’t a lack of trying. I was gonna drive in if I was any closer, get that POS. It definitely sucks to lose to someone like that but it’s not from a lack of effort. This Bass Pro Shops team was really good all year — eight wins, led the most laps, most top fives. Just come up one race short. Just so thankful for everybody at JR Motorsports. This sucks.”

Allgaier was third and Josh Berry, who got in the wall after the last restart, finished 13th. Allgaier himself also had some issues, as his gauges didn’t display anything in the car and later in the race smoke popped out of the pipes before the restarts. Allgaier persevered, though, and was able to finish third in the standings.

One of the early frontrunners had issues to start stage three. Sammy Smith made contact with Sam Mayer and eventually got up into him, while Riley Herbst was close to Smith’s rear. Mayer spun around into traffic, and multiple cars ended up crashing, including Stefan Parsons, Ryan Sieg, Anthony Alfredo and several others.

Sammy Smith gets into Sam Mayer and multiple cars are collected.

Smith then got more damage shortly after the next restart after Joey Gase got spun in front of him.

Meanwhile, though the Championship 4 drivers lost some spots on pit road throughout the race, they often worked their way up to the front until the last restart when the No. 8 of Berry had a problem.

In the end, it was Gibbs who stood on top.

POS sounds like a good nickname to me. I prayed for the late yellow. That car could be 4″ to low and it won’t matter.