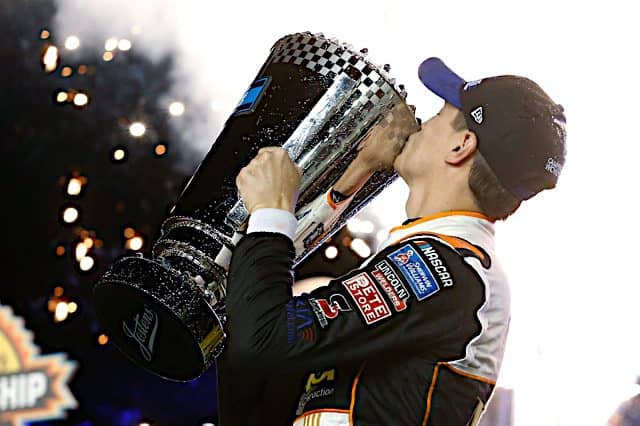 That left Smith hitting the phones, looking for work. He kept calling.

Turned out the one place that actually cared about Smith wasn’t even on his list.

“Front Row [Motorsports] was not one of the places that I called,” Smith explained at Phoenix Raceway this weekend. “I didn’t even think there was an opportunity. I had a ride pretty much set up, and I was excited about it, but it was literally about 30 minutes later after, yeah, after these 120 phone calls probably in the past couple days. I had gotten a call from Front Row Motorsports that they wanted me to run their truck.”

Front Row general manager Jerry Freeze had originally been eyeing Smith to drive FRM’s Cup car. But he also felt Todd Gilliland, who helped establish the No. 38 Truck, was deserving of the promotion. So both sides came together and talked about Smith staying in the Truck Series.

What Freeze didn’t know was how quickly Smith would fit in.

“The one thing I didn’t know when I had that initial conversation was the chemistry that Zane already had with these guys,” Freeze said. “He’s friends with them outside of racing, grew up racing against our race engineer. So they were all buddies. And when Zane walked in the door, it was like these guys had been working together for years.

“It was a perfect fit all the way around.”

How quickly Smith made everyone remember the talent that made him a rising star of the sport in 2020. He was just 21 years old then; at 23, he won three times and collected 18 top-10 finishes in 22 races. The comeback peaked with a career-defining performance at Phoenix, sweeping the first two stages before executing a stunning charge from 11th during the final laps.

Smith got himself stuck in traffic after a late caution for Hailie Deegan’s crash caused a number of different strategies on pit road. Championship rivals Ben Rhodes and Chandler Smith went for two tires while Zane Smith took four. A slower stop by the FRM pit crew, an issue for the team all night long, dropped Smith back in traffic with less than 15 laps left to make up the difference.

But no one on FRM batted an eye. The strategy was set long before Smith hit pit road, with all sides believing their driver could get the job done, even if it cost him track position.

“I knew he wasn’t going to overreact or do anything crazy,” said crew chief Chris Lawson. “I think he was just going to make it happen … [so I] just gave him tires and said, ‘Have at it, man. It’s on you.’

“I’ve always told Zane that I would put him on offense every chance we get. He doesn’t like to be on defense and neither do I. I’d rather put it in his hands and let him make the right moves. That’s what I told him we were going to do going into tonight, and that’s what we did.”

Moments later, Smith was diving four abreast through traffic, darting down on the inside to gobble up spots in less than a single lap. In what seemed like two seconds, he was battling with Ty Majeski for second place before Majeski’s spin set up the final caution, giving Smith the track position he needed to finish the job.

Ty Majeski loses control of his No. 66 while battling with Zane Smith for second! Zane Smith pulled off a FOUR-WIDE pass to close in on Ben Rhodes bumper before the caution came out with four to go!#NASCARPlayoffs #NASCAR

How did it happen, 10 spots without any moment of panic or concern? Lawson was barely talking to Smith on the radio throughout.

All parties involved said it comes down to the trust FRM has in one another.

“I had a great relationship with my past team at GMS, but I don’t want to call them old, but it was an older group, and the group that I have now is just younger,” Smith explained. “I feel like we weren’t always hanging out at the shop. We were also hanging out outside of work.

“I just think that goes a really long way. Me and Chris Lawson have a really good relationship, and he’s a past racer himself. We clicked right away. Then my engineer Dylan Cappello, we grew up racing together since I was about 12 years old. He’s from out here, and we spend every Monday together in sim.”

It led to a year in which everyone simply enjoyed the success they had along the way. And Smith’s respect in the garage area, in a year where drivers have been singled out for aggressive behavior, was evident in the post-race pressers of all his Championship 4 rivals. Chandler Smith went out of his way to praise Zane, claiming, “the No. 38 team honestly was most deserving” of the title.

It was clean, hard competition without any type of bump-and-run at the end. The respect among this quartet was clear even with Majeski’s spin in which the driver of the No. 66 took great pains not to take out Smith.

“It was really neat to see those guys race as hard as they did,” Freeze said. “It was a heck of a finish and I think everybody in the Truck Series should be proud of that.”

But the big winners were Smith and the growing success story at one of the longtime underdog organizations in the sport. A driver who had to make 120 phone calls last year not only knows where he’s going to race in 2023, it’s going to be at the Cup level part-time; he’ll defend the Truck title while running a limited schedule on weekends where his full-time job doesn’t run.

“To think of where we were 14 years ago and where it is today, with winning three Cup Series races, the Daytona 500 and winning the Truck races with the No. 38 truck the last few years,” Freeze noted. “It’s really come an awful long way and it just helps validate our company. It’s not just a race-winning organization but one that’s capable of winning championships.

“I’m excited for the future, where it might take us business-wise and with people.”