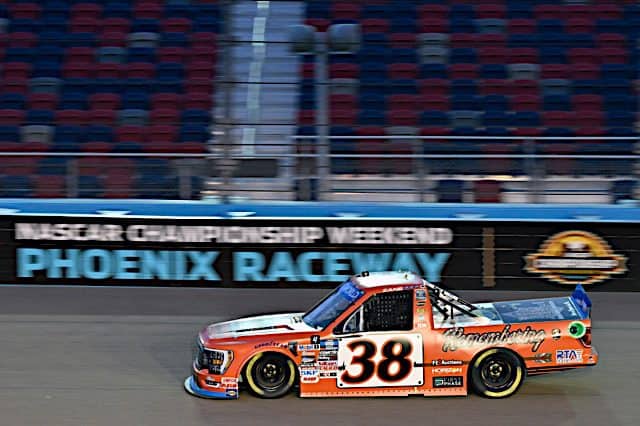 On Friday night (Nov. 4), there was late-race drama in the NASCAR Camping World Truck Series season finale at Phoenix Raceway. When the checkered flag flew, past midnight ET, Zane Smith held off furious charges from Ben Rhodes and Chandler Smith to win the Lucas Oil 150 and capture his first career Truck Series title.

Smith earned his first Truck title in his first season driving for Front Row Motorsports. The Phoenix triumph is his fourth of the 2022 season and seventh overall.

“Oh my god, third time’s the charm,” an emotional Smith told FOX Sports 1 after celebrating with his team. “I want this shit more than anyone in the world. I don’t care what anyone says. Thank you all you race fans, my whole team man, oh my God. I was crying that whole lap. Oh my god … Thank you, everyone. It’s all I got.

“I just wasn’t going to let it go down like that. I was either wrecked or I was winning this thing. There was no other option.”

Zane Smith won after he, Rhodes and Chandler Smith all made a mad dash to win the race and title on the last lap.

RHODES CAN'T GET THERE!

ZANE SMITH WINS IT ALL! 🏆 pic.twitter.com/QVopijNENP

After finishing second in the championship standings the past two years, Zane Smith’s move to Front Row Motorsports paid dividends as he finally earned the Truck title at the 1-mile track.

“Last year and the year before, we showed so much speed and should’ve won a lot more races than we did but Bob Jenkins [FRM owner] is the only reason why I’m here right now,” Smith continued. “And without him, none of this would be possible. When I came here, all he cared about was the guys that were on this team and I’d seen their work ethic, the effort they put in. I know they wanted it as bad as I do. I didn’t care what the truck looked like or what anything looked like; I knew their work ethic was there and we could make a championship out of this team.”

“I really don’t even know what to say,” Smith’s crew chief Chris Lawson added. “It’s all Zane right there. For me, we put tires on and let Zane do what Zane does. That’s what he did, so it’s just awesome. It’s amazing for this team, for Bob Jenkins. … It’s just great.”

Rhodes finished runner-up, one spot shy of repeating as the Truck champion. Rhodes lacked race-winning speed in his No. 99, but a gamble to take two tires on the final pit stop rather than four like the other three Championship 4 drivers vaulted Rhodes into the lead. The tire strategy combined with an overtime restart cost Rhodes his second win of the 2022 campaign and his second title.

“I don’t know, two tires vs. four, that was the name of the game,” Rhodes said. “We didn’t have the pace that we needed all night to compete so it was a great heads-up call by my crew chief [Rich Lushes]. Ultimately, we just didn’t need that last caution. I think we could’ve held them off for the final few laps. I was giving him all the dirty air he could handle. I think we were going to be fine until that caution just got us. I did what I could on the restart to try to get the jump, but you know, with the two tires vs. the four, I just didn’t have the grip I needed and tried to hold them off the best I could. Threw a move on him at the very end; just didn’t have enough grip to make it stick.

“So all in all I am proud of my Kubota Tundra team and ThorSport Racing. We didn’t have the pace but we got up there, and that’s what matters at the end. We just got to go back, do our homework, and second is not fun. I’m going to mope my way all the way back to Kentucky.”

“It just wasn’t meant to be,” he said. “Like I’ve been saying all week, like the good Lord, if it’s meant to be, it’s going to be but it wasn’t so. We were mistake-less all day. Pit crew was on top of their game, gained positions every time on pit road, had a shot at the end; it just wasn’t meant to be and I’m at peace with that because at the end of the day, it’s all part of the bigger plan. So congrats to the No. 38 team. Their truck was lights out all day. They were in a different zip code all on their own. It was fun racing with them.”

With less than five laps to go of the scheduled distance, the Championship 4 drivers ran first through fourth. Ty Majeski attempted to pass Zane Smith on the inside, but Majeski lost control of his No. 66 Toyota and spun.

Majeski ultimately wound up 20th, not indicative of his performance in his first full-time season driving for ThorSport Racing.

“I don’t know, I was being aggressive there,” Majeski said. “Obviously want to bring a championship back there for Duke and Rhonda [Thorson, owners] and everyone back at ThorSport. I thought the best opportunity for us was to try and wiggle the No. 38 a little bit, try and get underneath him. Try and race it between Ben and I. Being aggressive underneath him, just took the side force off of me and I lost the truck there. So we’re going for it. All you can ask for is a chance to win the championship inside five to go and we had that tonight; just didn’t pan out but proud of our season, what we accomplished together as the No. 66 bunch.

“It stings to be that close and see it in front of you; just come up a little bit short but we’ll learn next year and come back stronger.”

Zane Smith won the pole earlier on Friday, then swept the first two stages. While Smith battled hard with the other three championship contenders in the final stage, the first two stages were quite calm, with only an incident involving Armani Williams and Keith McGee.

Despite leading 77 of the 154 laps, Zane Smith had to regain positions on track as his pit crew cost him several spots on pit road, adding to the exciting finish to wrap up the Truck season.

Zane Smith became the second Ford driver to win a Truck title, joining 2000 champion Greg Biffle. Smith will defend his crown in the 2023 season as he will return to pilot the No. 38 Ford.