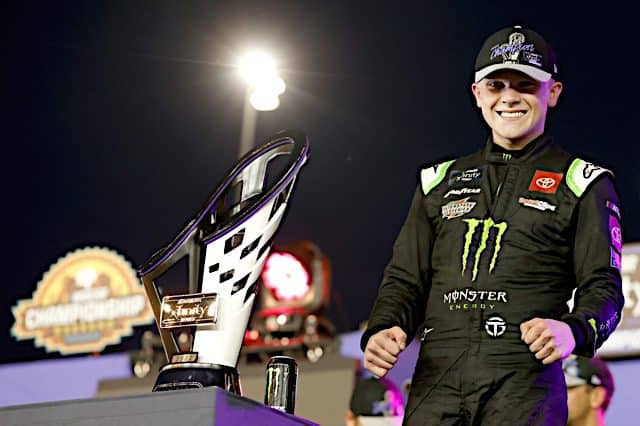 Ty Gibbs won the NASCAR Xfinity Series championship and the final race of the 2022 season on Phoenix Raceway in what was a commanding effort just one week removed from the torrent of drama he caused at Martinsville Speedway.

Noah Gragson, Justin Allgaier, Landon Cassill and AJ Allmendinger rounded out the rest of the top five, as Gragson and Allgaier’s late race efforts at an overtake came up just short.

This might have been the most disappointing, yet foreshadowing Xfinity championship in recent memory, but not for the reasons you expect.

Joe Gibbs is the real winner this week, because now he can at least say that despite all of his shortcomings (and believe me, there are many), his grandson is a championship-level driver.

“We had a tough week,” Gibbs after the race. “Everybody knows last week was … it wound up just being a terrible experience, and I know how that came across to everybody, so this week was really hard all week.”

It sounds like Coach Gibbs didn’t catch much shuteye since Martinsville, but he can at least rest easier now, and I’d expect an announcement to come soon about a certain young driver filling the No. 18 NASCAR Cup Series seat.

Pit crews are something that get overlooked far too often in our sport, but their importance shined brighter than ever underneath the lights, as Gibbs’ late race lead was due holistically to his team’s best 13.7-second stop of the night.

In comparison, Gragson’s final pit stop dropped him all the way down to eighth on the grid, which forced him to drive through some of the fastest cars in the field. By the time he had reached Gibbs, lap traffic was in the way, and they certainly didn’t do Gragson any favors either. If he would have been able to start right behind or beside Gibbs, we might be having a very different conversation right now.

Gibbs wrote the biggest chapter yet in his penultimate villain origin story, right before a probable jump to the Cup Series, no less. I didn’t believe he would make it out of the first stage, but when nobody can catch you, it’s hard to get turned.

Ty Gibbs wins the Xfinity title in his first full season. 11 wins and a championship at age 20. Fans booing like crazy. pic.twitter.com/TpqhrQOorg

The final Loser of the season has to go to none other than JR Motorsports. After spending just about the entire season on the Winners list, it had the best chance that I’ve ever seen to bring home an Xfinity championship. When 75% of the championship four were JRM drivers, there’s no excuse to not bring home the hardware.

Scheme of the Year

.@joshberry brings the @tirepros to pit road for four tires, fuel and a chassis adjustment to tighten the No. 8 up for this run. pic.twitter.com/gxhYeLu9aG

The winner of the Scheme of the Year is Josh Berry‘s Tire Pros No. 8 Chevy. I love a red and black race car, and this one is week in and week out the best in the field. Thankfully, it’s also returning in 2023, so we’ll be able to see Berry wheel it around the front of the pack for at least one more year.

It’s time to address the Gibbs controversy one more time.

The odds are that Gibbs’ time in the Xfinity Series is done. Everyone and their mother believes he will be piloting the No. 18 Cup car for his grandfather next year, and last night, he wrote what very well could be the final chapter in what was a short, yet ultra controversial Xfinity career. It was one that was marred with consistent dangerous driving, little to no sportsmanship and more boos than cheers.

However, he did prove one thing last night that he’s had in his tool belt all season long: he can drive the hell out of a car.

That was one of the best championship-winning drives we’ve seen in a while, complete domination from start to finish. With Kyle Busch on the back end of his career, Gibbs is lining himself up to be the next driver that everyone loves to hate, myself included.

The sky is the limit for Gibbs, for better or worse. Pick your side now.

Next up on the Xfinity Series schedule is a much-needed break. Drivers will return home to their families and teams to start contract negotiations, hunting trips and for some, simply some R&R.

We’ll return to the famed Daytona International Super Speedway on Feb. 18, 2023, for a new year with plenty of new faces and storylines to follow. Until then, enjoy Silly Season, folks. We’ve still got plenty of that left.

The fact that Ty the Turd had to be told to “be humble” yesterday speaks volumes that he doesn’t get it, nor will he ever get it, more likely than not. Something in that pea brain of his does not seem to be firing on all cylinders. IMO.

The fact that after lasts weeks fiasco he was even allowed to be in a position to win the championship is a damn travesty. What a shitty win and winner. May JGR be blessed with all the headaches of having this nepotism spawn around.
Sounds like unrest is at Jesus Joe’s Church. Good.

The fact that this idiot will think that calling him a “black hat” or “villain” is a great thing is worrisome. I worry about the other competitors; this fool will wear it like a badge of honor and continue on his merry way, without consequence. In reality, he is just a spoiled silver spooned brat who is too vanilla and privileged to pull it off.

His acceptance speech at the banquet should be something “special” just like him. I’m sure he has had his Hall Of Fame speech written since grade 9..