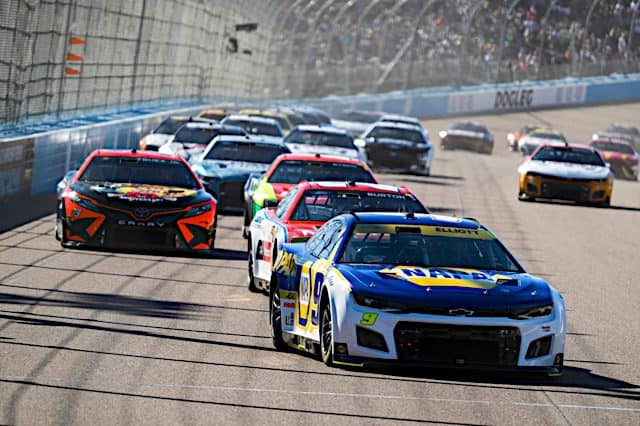 Championship Weekend is a busy time in the world of NASCAR. Everyone is hard at work and dealing with ginormous pressure. So much so that they cannot realistically enjoy the weekend. For TV, that’s not as much of an issue. However, it can result in changes that are not necessarily good for the broadcast.

Sunday’s NASCAR Cup Series season finale was a day of mixed emotions. You had the championship battle between Joey Logano, Ross Chastain, Christopher Bell and Chase Elliott on one hand. On the other, you had the heartbreaking news about Coy Gibbs.

In regards to the Gibbs news, we first started getting inklings about that right about the time Countdown to Green started. In that situation, you have two options. You can report about it, but you run the risk of being incredibly insensitive at best. If you’re wrong, your credibility is completely shot and you could be punished both by your employer and other teams. The other choice is to sit and wait.

As you know by now, Joe Gibbs Racing announced the death of Coy Gibbs roughly 40 minutes before the green flag on Sunday. NBC had Kyle Petty talk about the situation since he’s been there before. It’s a tough situation, but I believe that NBC handled it with class.

During the Peacock-exclusive portion of NASCAR America Post-Race, they expanded upon the circumstances. It’s going to be a tough offseason for JGR. It also seemed rather tough for Marty Snider to talk about.

An unplanned aspect of the broadcast Sunday was the absence of Steve Letarte, who struggled on Saturday to get through the Xfinity Series Championship Race broadcast before leaving and going to Saint Joseph’s Hospital in Phoenix. There, he had to have surgery.

Very little in the world would keep me from broadcasting the Championship race from Phoenix. Well…. Apparently an emergency appendectomy has done the trick. Thank you to Saint Joseph’s hospital and everyone who helped me out. pic.twitter.com/ftkdD31xZ4

As a result, Sunday’s broadcast was less technically adept than normal. Dale Earnhardt Jr. was apparently in fairly regular communication via text with Letarte during the race to try to supplement the telecast. It helped to a certain degree, but it just wasn’t the same.

The fear with these winner-take-all championship races is that the whole thing becomes just about the Championship 4 and no one else matters. On Sunday, that particular scenario didn’t really happen, thankfully.

That’s likely because of the three championship races in Phoenix, the non-championship contenders put up the biggest fight on Sunday. Ryan Blaney was right up there in the hunt, along with Chase Briscoe and William Byron. You couldn’t ignore them.

Sunday’s race had the least number of lead changes of the three championship races in Phoenix, but that’s mainly because Logano was kicking butt most of the day. I would have been happier had more time been spent covering other issues in the field.

For instance, Alex Bowman was having a decent run in his first race back after his concussion in Texas until he got cleaned out by Michael McDowell exiting turn 2. This incident seemed really strange on the surface. It would have been a good time to make use of the streaming in-car cameras in order to help explain just what the heck was going on there, like NBC did with Chastain back at Charlotte. It just couldn’t have been just a one-off.

The race ended a little bit ahead of schedule, allowing for a little more post-race coverage. Despite that, there really wasn’t that much. Naturally, you heard from the Championship 4 drivers. Logano was overjoyed, while Chastain was decent. Bell was disappointed due to obvious circumstances, but able to put everything into perspective. Elliott was just plain angry, but didn’t want to show his anger.

Outside of the championship contenders, you heard from Blaney, Briscoe and Kyle Larson. Of note, Blaney was really not in a great mood afterwards and appeared upset with the line of questioning. I’ve personally seen this before from Blaney. The last time I covered Cup at Watkins Glen back in 2019, Blaney finished fifth, but his run was overshadowed by a collision with Jimmie Johnson. Afterwards, he was perturbed by the questioning.

Sunday’s race was reasonably competitive, but not that much at the front. Logano and Blaney combined to lead all but 16 laps Sunday. It was a little frustrating to watch at times.

Phoenix was always a curious choice in regards to a championship race venue. It pales in comparison to Homestead and pre-renovation Atlanta, the tracks that had been scheduled to host the final race of the year every year since 1987 (2001 is an exception due to 9/11). Our own Dalton Hopkins wrote Monday that NASCAR should consider moving it.

See also
Thinkin' Out Loud at Phoenix: Can We Please Change the NASCAR Championship Venue Already?

For now, it has at least one more year at the end of the season. We’ll see what happens in 2023 with a slightly revamped Next Gen car.

Saturday brought the NASCAR Xfinity Series teams out for one more battle for the title. For Joe Gibbs Racing, it was all smiles here as Ty Gibbs won the race and took the title.

Unlike Sunday’s race, this event was way more focused on the championship contenders, to the point where seemingly the only times where non-championship drivers were mentioned was when they were involved in incidents or if the leaders were lapping them.

That’s just not going to work. I know that it’s the championship race, but you can’t narrow everything down to just four drivers. We’re talking about a race with 38 starters. There’s a lot going on in the race.

To give you an idea of just how focused the broadcast was, take the first caution for example. Brandon Brown spun in turn 1 and ended up stopped in the middle of turn 2 before NASCAR threw the yellow. The broadcast saw Brown’s car there, but more or less ignored it because they were covering a battle.

During the yellow, a number of top runners, including Sammy Smith and Nick Sanchez, pitted. This was all but ignored, despite these drivers being in third and fifth. You would never see that outside of a championship race.

Due to JR Motorsports having three of the four drivers in the Championship 4, Earnhardt Jr. chose to take the broadcast off. It was an understandable move since he likely would have been quite distracted. He chose to spend the race on Sam Mayer’s pit box as it was “neutral ground.” Unfortunately, he probably didn’t have much fun up there.

Post-race coverage was of a decent length. Viewers heard from all of the Championship 4 drivers, along with championship-winning crew chief Chris Gayle.

We also saw a substantial amount of hatred for Ty Gibbs. The crowd was not having it. Ty was very happy to win the title, as he should have been. The whole mess from Martinsville really shook him. I really don’t think he expected everyone to hate him winning so much.

I don’t understand the Bell interview on the post-race show. He had no involvement in the race other than being part of the JGR fold. It just seemed like an unnecessary way to try to promote the Cup race.

The takeaway from this broadcast is the simple fact that the only reason it was remotely enjoyable is due to the fact that the Championship 4 drivers were competitive with each other. Take that away and it would have been the second-to-worst NASCAR broadcast of the year. The worst was the Truck race in Knoxville, by an order of magnitude.

Covering a race the way Saturday’s event was covered can turn a number of race fans off to the sport at large. Even if Ty Gibbs thinks he doesn’t have them, every driver has fans. Just because a race is a championship race shouldn’t significantly change how a race is covered. Give me all the action you can find. I’m not picky.

That’s all for this week. Just because the NASCAR season is now complete doesn’t mean that the racing season is over. This weekend, Formula 1 is back in action at the Autodromo Jose Carlos Pace in Sao Paulo, generally referred to as Interlagos. Meanwhile, the FIA World Endurance Championship will be in Bahrain to finish up their season with the Bapco 8 Hours of Bahrain. TV listings can be found here.

Despite the NASCAR season being over, this will not be the final TV column of the year. The Critic’s Annex later this week in the Frontstretch Newsletter will cover the Lucas Oil 150 for the NASCAR Camping World Truck Series at Phoenix Raceway. In addition, I currently plan to have a full review of the whole 10-episode run of Race For The Championship in the near future. The whole season is currently available for streaming on Peacock (subscription required).

I must not have watched the same coverage on Sunday that you did. They barely covered any but the 4 playoff drivers. Pathetic.

They need to put a word count cap on Burton, after 1 hour in to the race his mike will shuts off.

I wish he would get his sinuses looked at. So nasally that I can’t stand listening to him.

Bill B
Reply to  Bill W.

I must have muted the TV a dozen times when he was talking. I like him as long as I don’t have to listen to him talk for more than 30 seconds.

I have enjoyed reading your observations. It is refreshing and a non-biased approach to your reporting. Have a great off-season and please return next season.

Bill B
Reply to  RCFX1

Obviously Blaney would have ended up like Elliott… LOL.

The networks have to get rid of the Chris Russo clones and they have a few months to do it. It will save the mute button on most remotes. They also have to get a broadcast team that knows how to televise NA$CAR’s examples of Brian’s product without putting the viewers to sleep, which is the product’s problem.