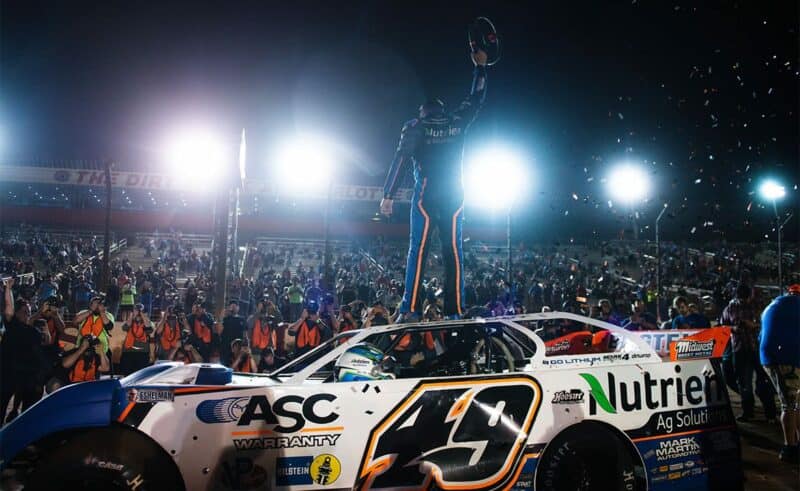 Smoky Mountain Speedway is coming off a 2022 season that saw it host its richest race in track history before a capacity crowd. Georgetown Speedway in Delaware proved extremely racy just last weekend for a season-ending race program that I saw firsthand, enjoying an absolutely jaw-dropping sensation of speed.

Yet despite that, both of these successful ovals are done for next year, being reconfigured by their owners into shorter layouts for 2023; Georgetown is rumored to be undergoing a change from its current half-mile into a 0.4-mile oval similar to Bridgeport Speedway, while Smoky Mountain is being shaved down from a 0.4 to a 0.375-mile oval.

Just confirmed! Smoky Mountain Speedway will be converted from a 4/10-mile to a 3/8-mile track for the 2023 season.

It’s not that there is no rationale for these decisions. Shorter racetracks put less strain on equipment and also reduce the importance of having a massive engine under the hood, which can in the right circumstances mean better racing for fans while putting less demand on race teams. And in Georgetown’s case, emulating Bridgeport means emulating one of the most competitive racetracks on the East Coast.

But on the other hand, neither Smoky Mountain nor Georgetown appeared to be hurting for car count or fans in 2022. And losing two unique ovals that weren’t broken as racetracks to mimic other ovals already out there is disappointing for a sport in dirt racing that’s in part built on its unique venues.

Besides, Georgetown has plenty of other facility upgrades that need to happen. The racing surface was the one thing there in good shape.

NASCAR is done and Formula 1 is academic, but the dirt racing season marches on, with the points crown for the inaugural XR Super Series campaign still up for grabs between Chris Madden and this weekend’s World Finals late model winner, Jonathan Davenport.

The bigger story, though, is the XR series having major competition for its two remaining events in 2022; this weekend’s program at the Dirt Track at Las Vegas Motor Speedway is going off the same weekend as the Flo Racing Night in America tour is putting on a $53,000-to-win feature at Senoia Raceway in Georgia, a track within much easier driving distance for the majority of the nation’s super late model teams.

Then follow up that up with the series’ final race of 2022 the week after Thanksgiving at All-Tech Raceway, a race going directly against the Gateway Dirt Nationals, an event boasting an entry list of over 100 confirmed super late model entries.

Our 2022 @CastrolUSA @GatewayDirt Nationals presented by @oreillyauto Parts Super Late Model Prelim Nights are set! What night are you looking forward to the most?

I for one can’t wait to see both remaining XR events, but the question to be determined is just who is going to race where each of the last two races. It seems certain that Davenport, Madden and a few other national ringers will campaign both XR races, but the overall car count, which will ultimately determine how competitive the races are, could go both ways.

Las Vegas is an extremely long haul for any team not based on the West Coast, and though both Vegas and All-Tech are set to pay strong purses, December is well beyond shutdown for many race teams.

XR is still in business despite the predictions of many. This next few weeks will be a real objective measure of just how influential the fledgling tour has become.

The Renegades of Dirt Tour created a literal mushroom cloud in the pit area at Atomic Speedway over the weekend, cutting the purse of their headline $14,000-to-win super late model event Saturday night to $4,000 AFTER race teams had paid their entry fee. That led to several race teams, including soon-to-be Lucas Oil Late Model Dirt Series regular Devin Moran, to pack up and go home without turning a lap.

Those that stayed may or may not have been paid judging from what’s been posted to social media. But the situation was so dire that the folks at Atomic Speedway, which leased the track to the Renegade tour for the event, stepped in and paid the drivers in the supporting sport modified class after it became clear the sanctioning body could not pay its advertised purse.

For any fan, team, or driver who attends @AtomicSpeedway please read the below. pic.twitter.com/DJhZ5DIELc

It’s shocking in 2022 that this type of fiasco could still unfold in professional racing, and here’s hoping all involved can figure out some form of financial due diligence to ensure this doesn’t happen on race day again. In the meantime, PSA to all dirt race fans, steer clear of any event sanctioned by the Renegade tour. Predictably, the tour canceled its four-day scheduled race event at Hidden Valley Speedway this coming weekend on account of “weather”… despite the weather being clear three of the four scheduled race days.

It is true that the World Finals did up their purses for the 2022 edition, with Saturday’s finales paying a $25,000-to-win prize that is more fitting of an event with the stature of the Finals. Still, there was both confusion and disappointment relating to what the event actually paid out over the weekend.

I must have missed the announcement of the purse being reduced at Charlotte. World Racing Group pre-event release showed the purse breakdowns but what drivers were actually paid was much less. 🤷‍♂️ pic.twitter.com/P8eKXI6e7j

Now let’s be clear, this is in no way equivalent to the fiasco that unfolded with the Renegade tour over the weekend. But the fact that the World Racing Group sanction had to apologize for the confusion over payouts is problematic for a major race, and further the payouts really do pale when compared to what other crown jewel races paid in 2022, especially in the super late model ranks.

Of course, given the car count the Charlotte event drew over the weekend, there really is no reason for WRG to spend more on prize money. Both the pits and grandstands were full.

Roth Motorsports announced this weekend that James McFadden will return as the driver of the team’s No. 83 World of Outlaws entry full time in 2023, but the team will be undergoing changes, namely that Toyota Racing Development and its sprint car engine will be powering the team’s cars starting at Volusia in February.

#ICYMI@JamesMcFadden25 is set to return to @RothMotorsports in 2023 to chase a World of Outlaws title using @ToyotaRacing power.

The Roth team’s West Coast-based second car already made use of the Toyota power plants in 2022, so it won’t be completely new territory for the longtime WoO operation. The real question though is just how long it’ll take for the team to work the bugs out of Toyota’s engine. Recall that Donny Schatz and Tony Stewart Racing spent years helping Ford get its own purpose-built sprint car engine up to speed.

On the plus side, it’s always good to see more money getting pumped into sprint car racing.

It’s not uncommon for racetracks to take on new clay in the offseason, but after seeing how bad new clay can go wrong not once but twice this season between Eldora and Volusia, I’ve got to admit I felt a little nervous seeing pictures of my two closest dirt tracks, Winchester Speedway and Williams Grove Speedway, taking on dump trucks of new dirt as part of offseason work.

The 2022 racing season may be over, however that doesn’t mean the hard work stops!

Crews are adding fresh clay to the speedway in preparation for the 2023 season. pic.twitter.com/0CwWQ3gJgu

Both tracks are stalwart facilities with a proven track record, but come March 12 I’ll definitely have my fingers crossed visiting the Grove for opening day that the racing surface plays nice. Because if new clay can stymie the folks at Eldora and Volusia, it can stymie any racetrack.

I believe Georgetown should focus on things like, bathrooms with plumbing before changing the track. That surface was very racy even on a cold night. I believe Smokey Mountain had a few races that the surface didnt hold up, and the racing wasnt as good, which is very unusual for that track.

New dirt for Williams Grove cant fix their promoting issues. Im sure they will rain out early like they usually do.